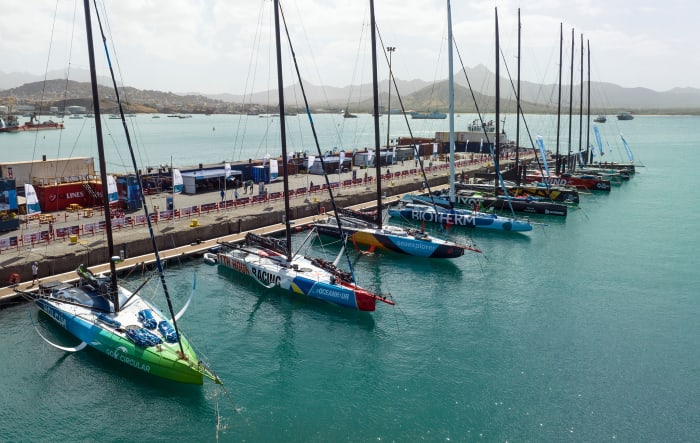 After a trial by fire start to the race and only a brief stop for limited fixes, the five IMOCA 60 crews in The Ocean Race set off for Cape Town, South Africa, early on January 25.

Despite arriving somewhat battered in Cabo Verde, an African island nation west of Senegal, the fleet saw no significant structural breakages during leg 1. Still, after sustained winds of 35 knots gusting to 50 in the Mediterranean, a minimum of three boats saw sail tears, with one, the VO65 Viva México, needing to divert to port to assess the damage. IMOCA 60 fleet leader Holcim-PRB struggled with rudder shaft problems, and across the fleet there were minor breakages.

Spare parts, new materials, and maintenance crews were not allowed on the boats in Cabo Verde, so any fixing or jury rigging had to be done by the crews themselves. The stopover in Cabo Verde was short, with limited maintenance allowed and no in-port race. There was, however, time for an Ocean Race Summit during which the UN Secretary General Antonio Guterres addressed attendees about ocean health and the race to protect marine environments.

Crew rosters have been shuffled somewhat for leg 2, including two of the five skippers coming off their boats. Malizia skipper Boris Herrmann suffered significant burns during leg 1, and at the recommendation of medical professionals he will be sitting out the next leg. French sailor Yann Eliès will bring the crew back up to four, but Herrmann is expected to make a full recovery and return to the race. For Guyot Environment, French skipper Benjamin Dutreux will be turning over the helm to his co-skipper, German Olympian Robert Stanjek.

(Note: Due to the VO65 fleet’s course update to the Sprint Cup, they will not be competing in legs 2 through 5. Only the five IMOCA 60s will move on to Cape Town.)

Leg 2 will be all about decision making from the moment the teams cross the starting line. The north-south legs see a variety of climates due to rapidly changing latitudes, but success comes down to making the right calls when it comes to navigating large-scale pressure systems. The forecast looks like there will be very little wind right off the bat. The choice navigators face is heading south or west to seek out what little breeze there is. As currently forecasted, south looks like more breeze off the start but is followed up with little opportunity to cross the doldrums in any significant pressure. West would take the fleet out of the island’s wind shadow, but on a less direct route and into lighter air for the first 12 hours.