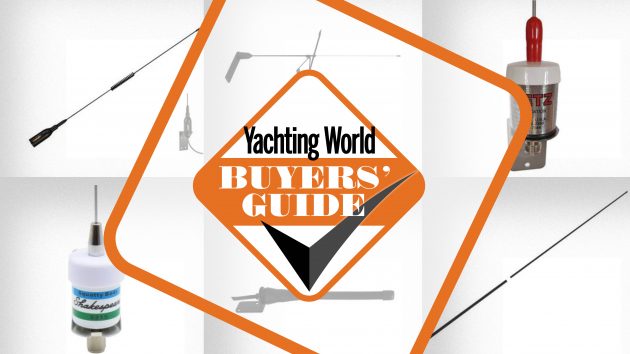 Often taken for granted, a yacht’s VHF radio is extremely important as both a transmitter and receiver. Even in our globally-connected world, VHF is often our only means of connection whilst at sea, and units are only as good as their VHF antenna…


Aside from the safety aspect, navigation alerts and weather updates, the non-essential uses of VHF radios are broad – from communication to and from the Race Committee for start procedure and courses, to having a chat mid-ocean with other open-sea rovers. They can also be used to book restaurants and order delivery pizzas in many a safe anchorage.

The importance of clear and robust VHF signal is crucial. You don’t want the anchovy topping on your Neapolitan when you specifically didn’t order it, or vigorous mocking for sailing round the wrong mark due to poor VHF reception.

To get the best performance out of your VHF antenna it is not so much about boosting your signal, as to try as much as possible to reduce the signal losses in your system, which are always inevitable.

The main focus of this guide is at the opposite end to the radio – the VHF antenna – very much the key part of the system, and there are several choices on the market. Unobstructed elevation is key to the mounting of the antenna. Ideally this should ensure a clear line of sight – so the mast head is the favoured location.

Our guide to the best VHF antenna options is broken down into 3 sub-categories: 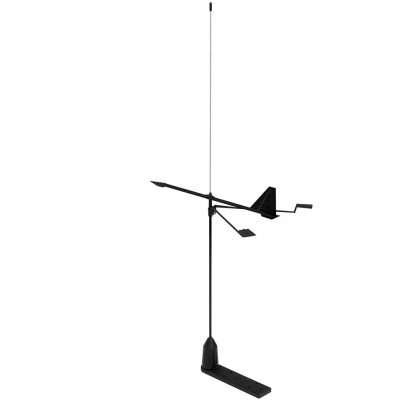 This combined Antenna and windex cleans up the top of any mast.

Particularly good on mastheads with a little more space, to fit this unit there must be enough room to avoid any conflict between the wind gear wand and the stainless steel whip antenna.

Boats with a mast crane would benefit from reducing the clutter at the masthead, as would those with forward-facing wind gear.

The Shakespeare brand (sold as V-Tronix in Europe) is one of the leaders in the VHF antenna field, so it’s easy to find after-sales support.

Combining the windex and VHF antenna to reduce the clutter really does makes a lot of sense!

Buy it now on Gaelforcemarine.co.uk 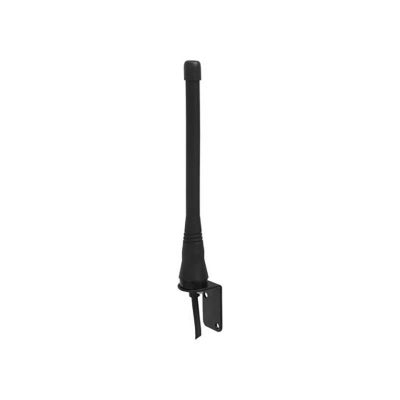 The beauty of the V-tronix heliflex stub is the low profile size and its robust rubber construction.

A favourite in the racing world to reduce windage, and fitted on the majority of raceboats to date, it can be easily mounted on the craneless grand prix-style rigs.

Its squat size means it’s shorter than the wind gear and the windex – space really is at a premium at the top of a race rig and simplicity is the key.

Reasons to buy
– The favourite of Grand Prix racers
– Small and compact to save space and reduce windage
– Made in a robust and weatherproof rubber casing – its tough!

Buy it on Amazon

But what if you can’t mount a VHF antenna on the masthead?

Not sure where to mount the VHF antenna due to difficulties and obstructions like bulkheads and access to the mast itself? Well, all is not lost.

For the most efficient signal, the main direction of the focus of the antenna is horizontally – there certainly isn’t quite as much need for cover directly up or down for that matter –  but the heel and the motion of the yacht are considered in the design, and manufacturers do allow for this. So finding a spot which limits obstructions is the goal.

Somewhere else on the mast, elevated or aftward, are the next best spots – so long as it’s clear of running backstays and anything else that may damage it or obstruct its view.

An interesting (first world) problem some sailing superyachts have encountered is that they have a VHF black spot just a few metres around the yacht itself, created by the mast. So the solution has been to add a couple more antenna lower down and on either side of the mast to allow complete unobstructed coverage.

Let’s have a look at some versatile whip antenna for mast or deck mounting.

The versatile options – on mast or deck

This little antenna is widely considered the best whip antenna on the market. It’s been around for 40 years and is favoured by the US Coastguard and many a seasoned cruiser.

With the coil guaranteed for life and the stainless whip replaceable, this little unit up for the challenge of long-term cruising.

Happy on the mast or transom, this is one tough antenna – but some do warn of making sure the cable-end connection is properly protected from the elements.

Reasons to avoid
– Harder to find in Europe, but not impossible
– Slightly more expensive than very similar offerings from the bigger rivals 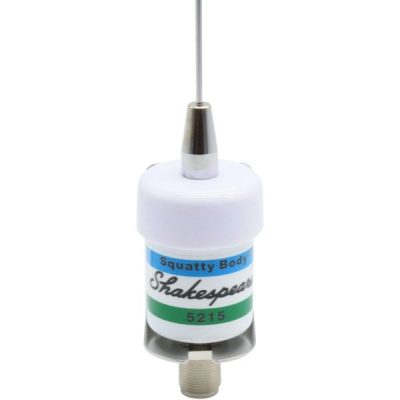 King of the Whip title challenger

These antennae are suited equally well on the masthead or the pushpit. This style is definitely a favourite of many seasoned ocean cruisers.

This is Shakespeare’s version, closely resembling the famous Metz Mantra but at a fraction of the cost. The whip-style antenna is small and light but very capable of great coverage, standing at 1m high.

The stainless-steel whip also has a fair bit of flexibility, which means it can take some accidental bending without damage, so when hauling in that prize tuna mid-ocean, you don’t have to worry so much about any breakages in the heat of the fight (in the VHF antenna department at least!) 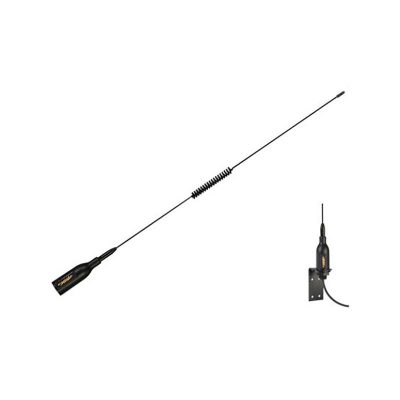 This tiny 530mm whip antenna was designed with RIBs in mind – but it also packs the same punch as you get in a VHF antenna twice its size.

Because of its RIB heritage it certainly is built to survive the bounciest conditions – perfect for those who either choose to or always find themselves with long upwind battles.

This would benefit from being mounted as high as possible but it seems to be pretty impressive even sat on the push pit. Quick to take on and off, it is well worth a look at, especially for smaller boats

Reasons to buy
– Small and mighty – used to a proper work out
– Easy to find a suitable elevated spot, due to its compact size

Buy it now at Cabelas

These fibreglass sturdy antennae will get you the best reception if deck mounting is your only option. 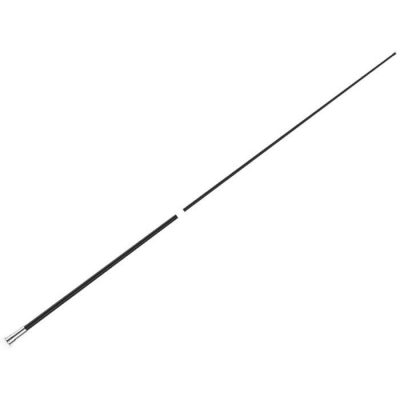 This fiberglass antenna comes under many different company names – Lowrance, Simrad and B&G, all big players in the marine electronics world.

Normal useable length is 1m, which is ideal for using in port or anchorage, but this can be extended to a whopping 2.4m when needed.

The connection is quick fit, so is part of the mount, which makes it really easy to remove the VHF antenna when you are not using the boat for extended periods without having to worry able cable runs.

Buy it now at Waveinn 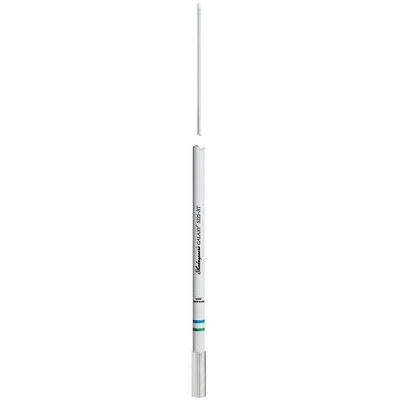 The go-to fibreglass deck mounted antenna for a decent signal, and globally available.

It is extra tough, hence the XT label, and comes in a choice of white or black with a UV protective polyurethane finish to keep it looking smart.

At 2.4m this antenna is probably as long as you would wish on a sailboat, but does get you the sort of boosted signal you need when not using the mast to get great coverage.

As mentioned previously, Shakespeare is a brand at the top of the game, so reliability is good and there is plenty of support, including a five-year warranty.

Reasons to buy
– A very popular antenna from a leading brand.
– Super stiff and tough which will last a long time
– Great coverage from deck level

Reasons to avoid
– Big. About as big as you can would want to get away with, so quite obtrusive