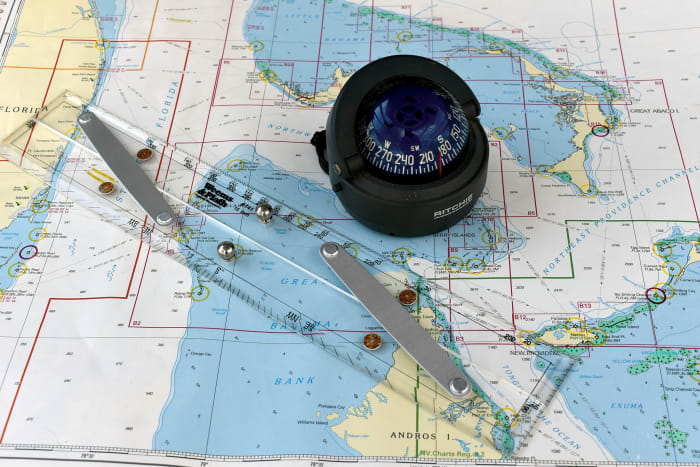 Here’s to the humble magnetic compass, without a doubt the sailor’s most reliable instrument onboard. It’s always there for you and with the rarest of exceptions, always operational.

Yes, I love my chartplotter, autopilot, radar and AIS. They help me be a safer and more competent navigator. However, they rely on electricity and geostationary satellites—which don’t always work. These modern electronics are also so accurate and easy to use that some sailors neglect to ever learn how to properly utilize an old fashion magnetic compass. And that’s a frightening thing.

Maybe you have an electronics blackout story. Here’s mine: on an awful night with an east wind, my brother and I left Government Cut in Miami to cross the Gulf Stream in a small sailboat. We were in a hurry, anxious to see our families in Nassau for Christmas. The northeast seas were huge but manageable, and we were doing fine—until we weren’t. About 0300 a wire chafed through and everything, including the radio, shorted out.

Time for some old school sailing.

With paper chart, parallel rulers and a flashlight taped to the binnacle, we held our course through the night and made the pass at Gun Cay, then on to Nassau, exhausted but grateful for the one instrument that needs only the earth’s magnetic pole to operate.

Before the magnetic compass sailors would navigate away from shore using heavenly bodies, which were great except when it was cloudy. In those days, a knowledge of winds, currents, depths and the habits of migratory birds was crucial, though far from exact. Vikings carried ravens with them. Upon suspecting that they were close to land they released one of their hungry birds. If the raven flew away, the helmsman would follow and likely find land.

The first reference to the use of the compass in navigation was by the Chinese around AD 1100 in the book, Phing-Chou Kho T’an, which included information about sailing ships and customs at sea. One of its passages reads, “Ships’ pilots are acquainted with the configuration of the coasts; at night they steer by the stars, and in the daytime by the sun. In dark weather they look at the south-pointing needle.” These early compasses were made using naturally occurring magnets, called lodestones, which if permitted to turn freely would always point to the Earth’s magnetic pole.

The compass then made its way to Europe where it was refined in Amalfi, Italy, to be used by the Venetians who had traditionally avoided sailing in winter when it was cloudy on the Mediterranean. The new “wind rose,” basically a dry compass in a box, allowed them to sail year-round, as Venice become a wealthy maritime nation. That said, it took time for compasses to come into widespread use as many seamen thought they operated by black magic.

As for the compass in use today, we can thank Edward Ritchie, who filed a patent application in 1862 for a marine compass encased in a glass filled with mineral spirits. The damping effect provided by the oil and gimbal mounting made it relatively stable and immune to the effects of pitching and rolling.

Of course, the magnetic compass is far from perfect. It points to the magnetic pole, not the geographic pole, which can be several degrees off depending on your location. It’s also subject to the whims of each vessel’s own magnetic influence, in what is called deviation. With a little practice, though, any mariner can take a magnetic heading and correct it to a true one.

Every year on the boat show circuit the new offerings get bigger, flashier, pricier, with electronic instruments that remind me more of a spaceship than a boat. I know, that’s just the normal progression of the business. Boatbuilders and equipment suppliers are only trying to make ocean sailing more user friendly (and safer). To me, though, creature comforts are of secondary consideration.

The first thing I do when coming aboard a boat is stand behind the wheel and imagine myself searching for an anchorage in the dark. How are the sight lines, would I be able to quickly douse the sails and deploy the anchor, and where’s the compass? If the electronics went dead would I be able use it to steer?

So, as you sail along with your eyes dancing over those modern instruments, don’t forget about old faithful in that little glass bowl, ready and waiting to save your bacon when the chips are down.