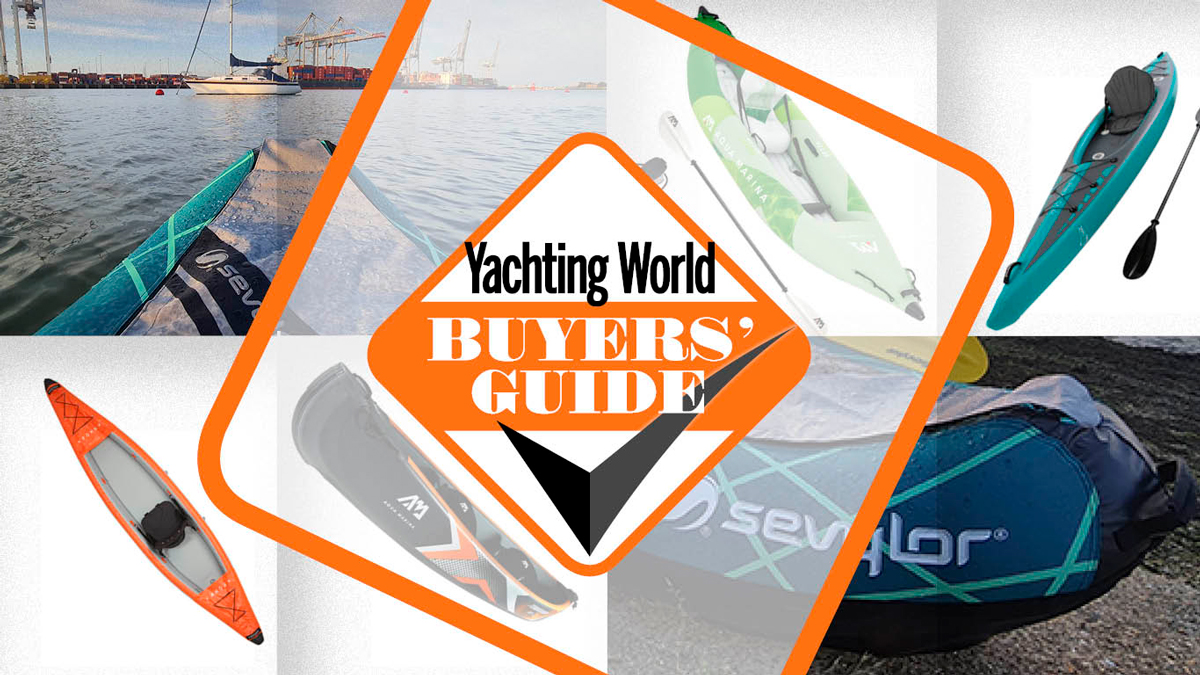 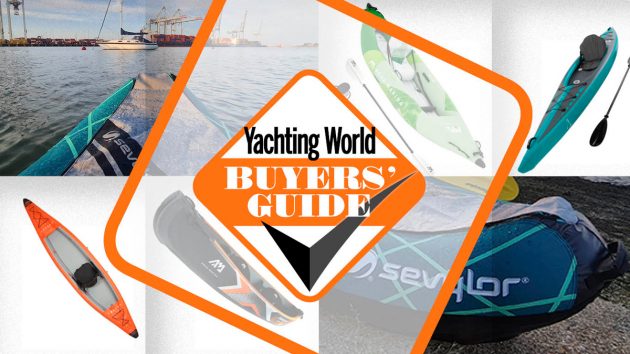 The best inflatable kayak is the one you use.

I’ve had a healthy fear of capsizing since I did an adventure holiday with PGL back in the early 80s. So one of the things I love about the best inflatable kayaks is that they are stable. Like really stable. Stable enough to stand up in, move around in and not worry about going for an unintentional swim. I love my solid boats but for convenience it’s hard to beat an inflatable.

The other great thing about an inflatable kayak is that they fit into the boot of even my tiny car, known as the Angry Badger, a Peugeot 107.

They’re also pretty lightweight too. Though this can vary according to the size and build. The ones I have picked out for you vary from 9kg to 25kg. 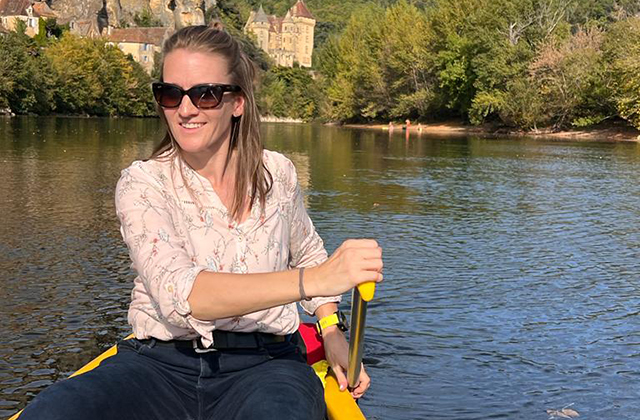 Paddling a canoe is civilised. You simply paddle a bit then use your paddle as a rudder to steer, then paddle some more. Easy peasy. No need for fancy sports gear. I go out in jeans and a shirt.

The great thing about an inflatable kayak or canoe is that they can be used as an alternative to a traditional tender. They allow you to go exploring places where bigger boats can’t go and you can carry some luggage too. And family. And pets. And fishing gear. They’re versatile.

With a kayak you do get a bit of water dribbling into your lap from the double paddles, so you’ll need to think about what clothes you wear (if you don’t have a full spray deck that is). But you can more easily take on some moving water and a few waves. Some of the best inflatable kayaks have the ability to clip on a full spray deck. With a double paddle and a braced seated position, you can cover a good few miles easily.

Canoeing though, that offers a more upright seating position and much less chance of getting wet. What you gain in the civilised paddling of the canoe  you offset for them being slightly more tricky to maneuver in strong winds and they’re less well suited to going through surf and waves. I personally love a canoe for the fact I can wear normal clothes and not get wet. Canoes often have more luggage space too. Though due to their size they can be a lot heavier.

Each have their merits. 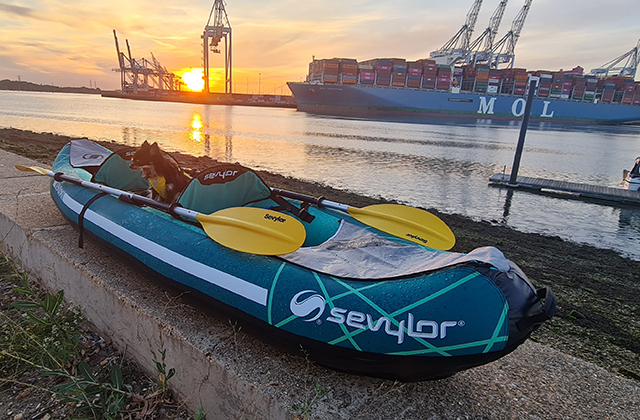 This two person kayak has two side chambers that inflate inside a hard wearing nylon outer that allows them to be pressured up. The floor is inflated too and this gives the kayak a certain degree of rigidity.

The two seats are inflatable and are quite comfy

The front and back have small spray-decks to help keep water spray out of the kayak. 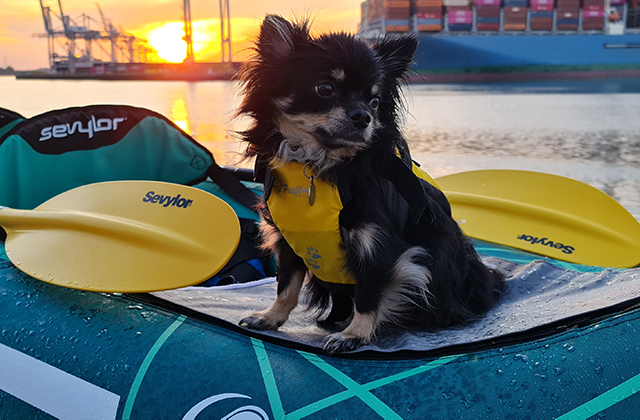 the madison spraydeck is strong enough to support a small dog

Naturally when we kayak with a double paddle, we get a little water coming into the kayak. So having a convenient drainage is good. This also allows you to flush it through with fresh water to remove any salt if you’ve been on the sea or salty water.

The Seylor Madison has a single, removable skeg on the bottom which helps it to track in a straight line.

It comes with a footpump and pressure gauge. The pump hose has a bunch of adapter attachments and I found them to be really awkward to get the right one in the valve and push the others out of the way.

The footpump was ok, but I think a dual chamber stirrup pump would be better. I found the footpump to be a bit leaky as it got up a little bit of pressure.

The two paddles are good enough, but if you paddle a lot then you might consider buying something a little more personally suited.

After an hour or so on the water I found that the chambers, which were pumped up on warm dry land, had gone a little soft, due to the cool water reducing the air pressure. It’s really tricky to top up the tubes while in the kayak and there’s a high risk of accidentally deflating a tube due to the way the valves are screwed in. 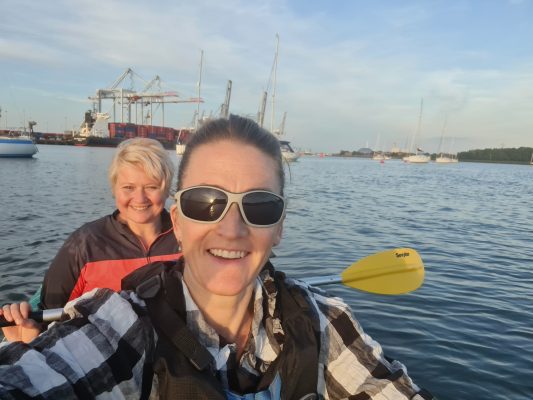 We managed to fit two adults and two small dogs in this Seylor Madison. It was quite a snug fit shall we say. Thankfully the smallest dog could fit on my lap. 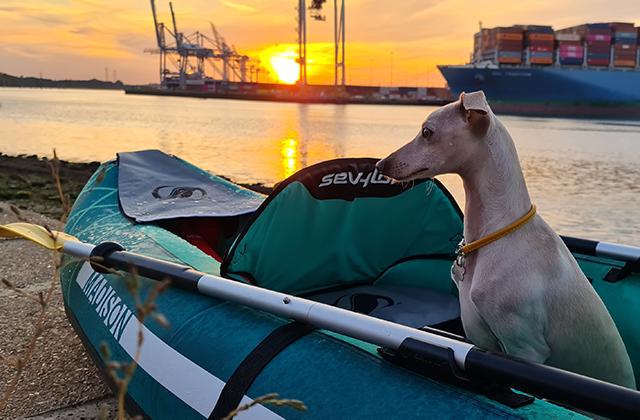 As the sides are quite bulky due to the method of construction, I find paddling a little bit of a reach. The paddles are a little longer than those for a non inflatable kayak to compensate for this. 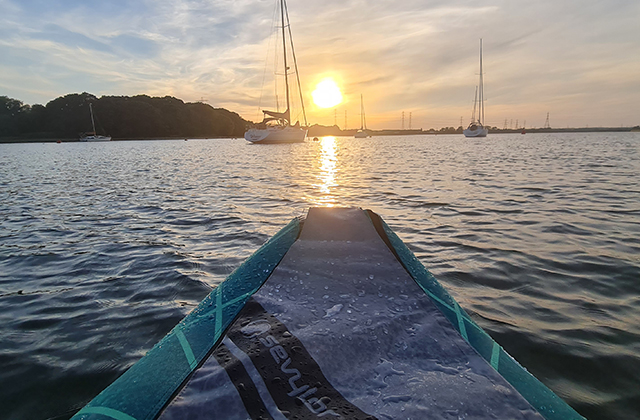 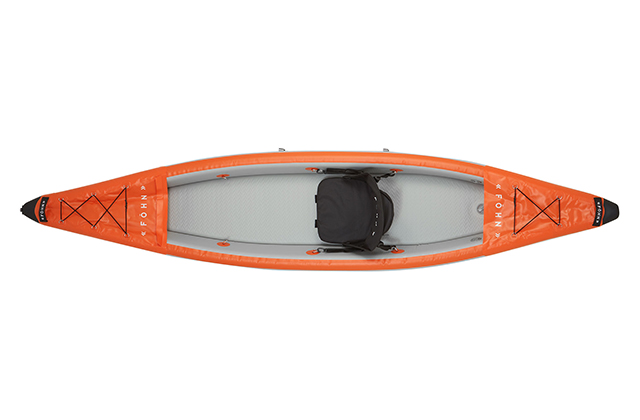 This dropstitch-constructed single-person kayak from Wiggle gives a rigid ride and is agile on the water. Although it’s a solo ride, you could fit a small pet in there with you.

The little spray decks on the bow and stern are handy for lashing bits of kit to or shoving a jacket or jumper under the lash down. 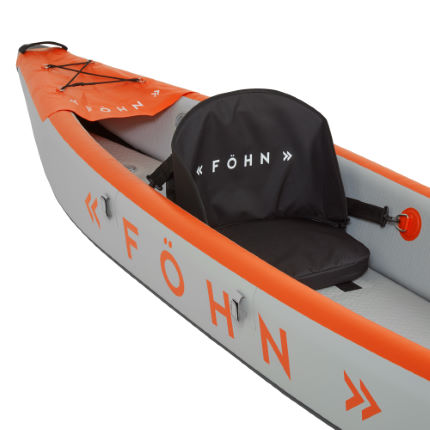 The seat is adjustable and relatively well shaped to avoid a numb bum.

There’s a really handy paddle holder on the side so when you carry your kayak you don’t have the juggle the paddle too.

It comes with a decent shaped rucksack-style carry bag, It has good handles!

As it is drop stitch constructed, this allows the side pontoons to be narrower and less bulky, which allows for a more natural paddling motion. 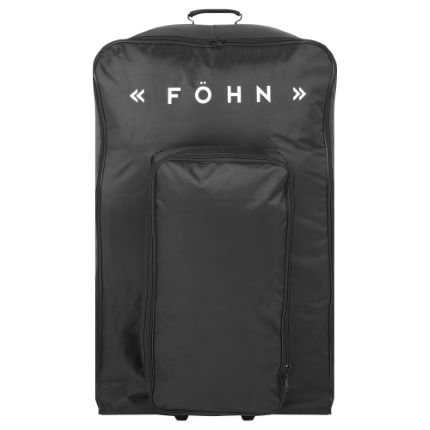 Dimensions of the kayak are 352cm long x 73cm wide, the max load capacity is 220kg and this inflatable kayak weighs in at just 12.9kg. It also has a removable fin for directional stability. 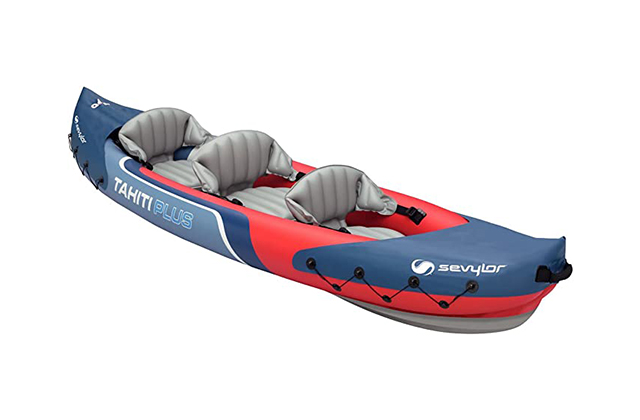 It offers stability and comfort when out on the water, with an integrated spray deck at bow and stern.

The seats are easy to adjust and remove so you can paddle this alone if you want or adjust the seats to accommodate people to suit.

Now I do believe you get what you pay for and at the lower end of the budget range you get very few bells or whistles with this. The inflatable chambers are large capacity making this a bulky kayak to paddle. You’re not getting a rigid solid ride but something a bit softer and more compliant. It’s unlikely you’ll be paddling off particularly far in this, but hey, don’t let me hold you back. It rides waves by flexing over them rather than riding through them. Which can be a bit disconcerting. Avoid waves if you can with this. A bit of a boat wash is about as much as you’d want to tackle.

Definitely more of a summer vibe or for inland waterways exploration.

This inflatable kayak comes with a backpack style carry bag. It has a PVC hull, two PVC side chambers and floor chamber.

It comes with a boat repair kit too.

Buy it now from Amazon 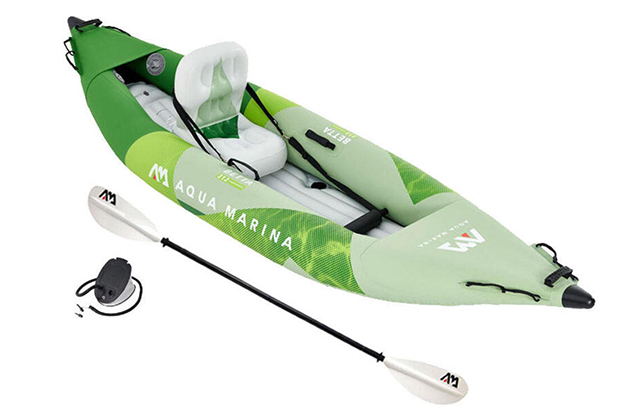 Decathlon is the palace of sporting dreams isn’t it. Their kayaks are pretty decent and budget friendly too.
This single-person inflatable kayak from Decathlon is an entry level price but offers a decent ride and a cheap way to get on the water.
There’s no drop stitching here though so, it flexes more than those that are. There’s two side chambers and an inflatable floor. 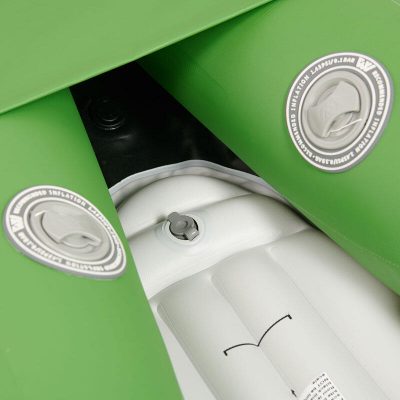 It has an adjustable seat with backrest and the basic essentials to get you out on the water for minimal cost. 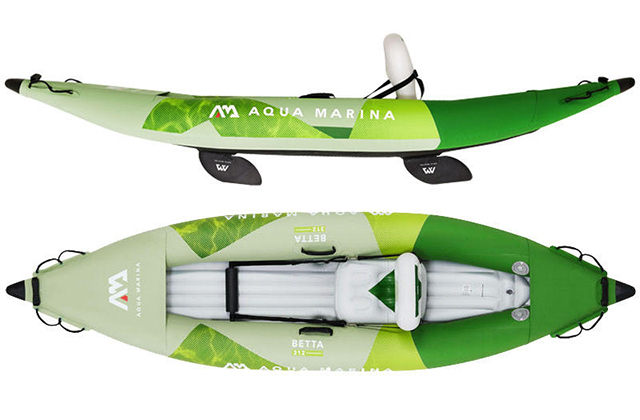 There’s two skegs on the bottom for directional stability and the curved rocker of this inflatable kayak make it idea for playing in small waves.

I really like the foot brace and other kayaks for more money often come without this. A footrest can make a huge difference for being able to paddle efficiently.

Price: £269
Buy it now from Decathlon 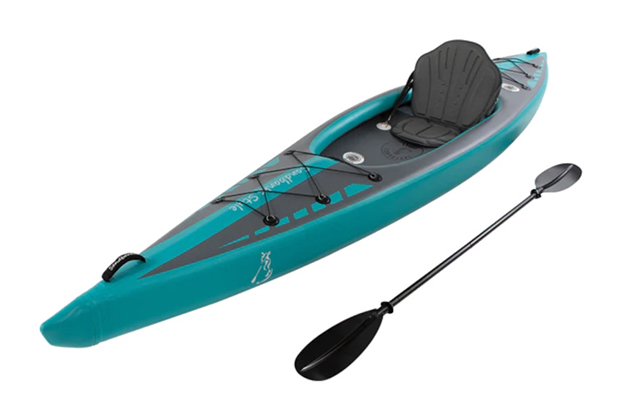 Ooh, Sandbanks style inflatable kayaks are really quite lovely. But then of course they are. just take a look at the price. Lots of people rate these kayaks highly for being a rewarding kayak to paddle.

Drop-stitch construction throughout means it is incredibly stiff and gives a real positive paddling experience. A lot of people have likened the ride in surf to that of a rigid kayak.

It inflates to 10psi and the supplied pump is decent quality. Though as with all drop stitched items, the high pressure required will mean you’ll have to work hard to that up to the correct pressure. An electric pump wouldn’t go amiss if you buy this.

It isn’t a sit in kayak as there’s no access to fit a spray deck. It’s more of a sit-on kayak. The cockpit area is prone to filling easily with water so you might want to carry a small plastic bailer to help stop the slosh. I’d like to see thigh straps for this to help with the paddling efficiency. 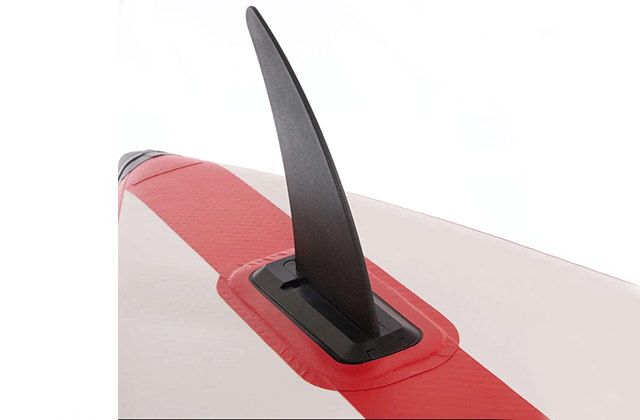 The removable skeg on the bottom is sturdy and well mounted.

Price: £749
But it now from annscottage.com 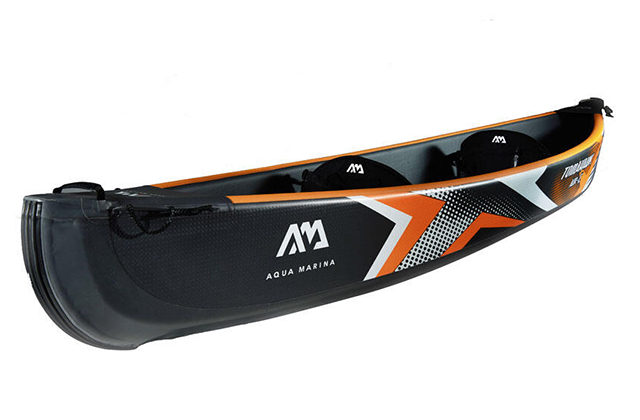 This fab drop-stitched inflatable canoe is distributed by Decathlon, Wiggle and Amazon.

You are spoiled for choice where to get this from, which is probably right, since it’s not a cheap item. Shop around for a reduction if you can.

The Tomahawk inflatable canoe model offers great versatility on the water and could be used an an alternative tender. The high sides and the thinness afforded by the drop stitching makes it easy to paddle and stiff enough to keep it stable. 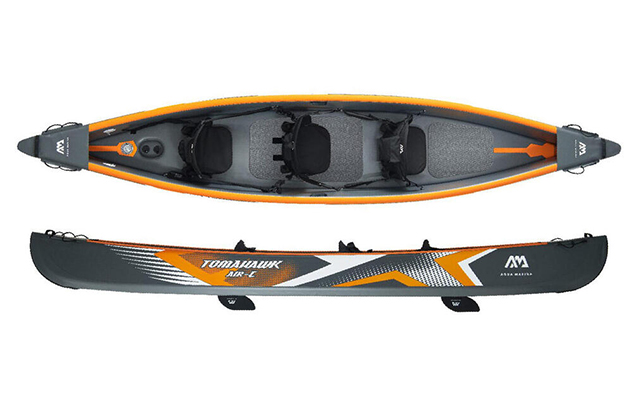 The added bonus is you can carry two people and your dog and some shopping in this one. Or your camping gear. Or 3 friends can paddle out together. It’s pretty big!

Coming at nearly 25 kilos though, you might want a friend to give you hand with this one.

Buy it now from Decathlon

Buy it now from Wiggle 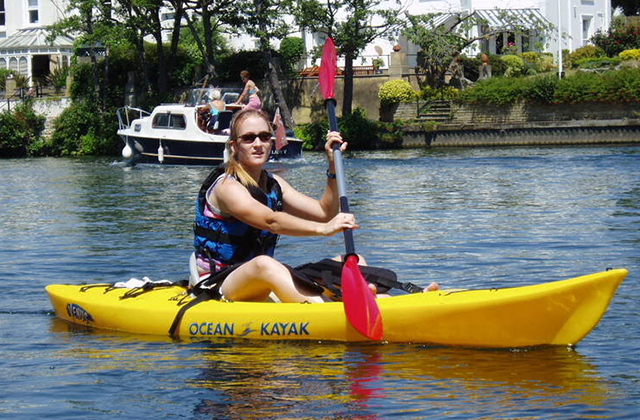 When using personal watercraft we always advise carrying some form of additional buoyancy aid.
This could be a a buoyancy jacket made of foam or an emergency inflate if you need it type of waist pack.

I wear a Yak solid foam buoyancy and a Spinlock Alto when I’m playing with small water craft. 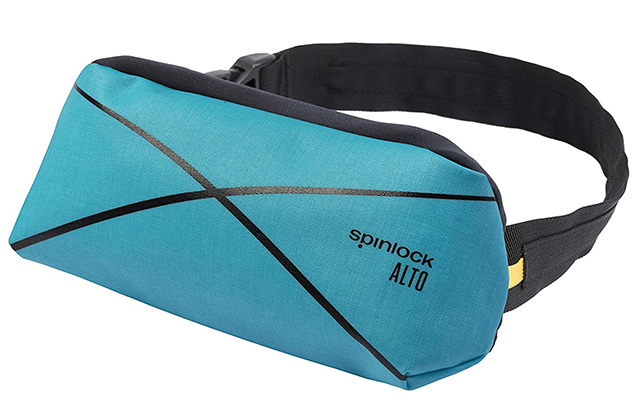 A 50n inflatable horseshoe buoyancy for when you really need it. The waist pack is light and you can barely feel you’re wearing it. So handy for paddlesports where you don’t want a bulky buoyancy to get in the way of paddling. It is manually activated so it won’t go off unless you tell it to. You can fall in the water to your hearts content and only pull the trigger cord if you really need it. 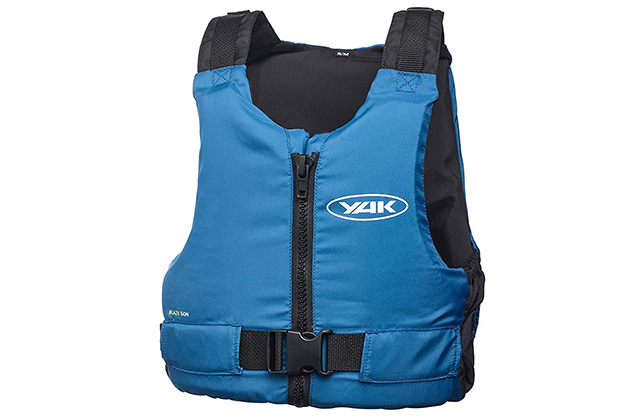 The basic 50n foam buoyancy is a staple of every paddlers cupboard/hanging rail. I’ve had my Yak buoyancy for over 10 years and although there’s the odd dirty mark on it, it’s still in great condition. I’ve used it for kayaking, paddlebaording and dinghy sailing, as well as a float to rest tools on as I swim around the waterline of my yacht scraping weed off.