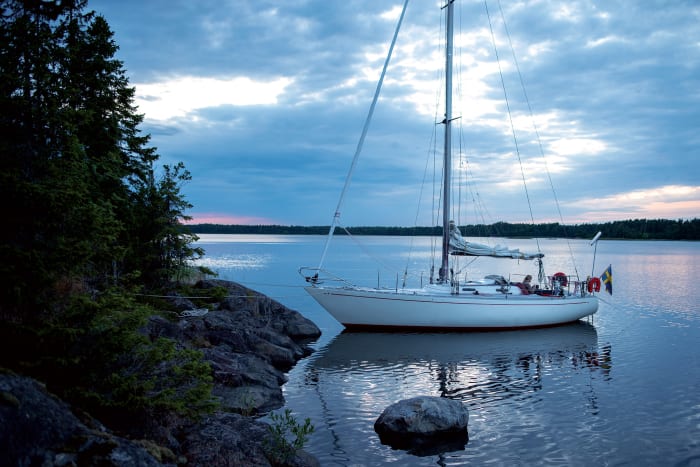 Until very recently, the batteries in sailboats used some form of lead-acid chemistry to store energy. Different manufacturers used different techniques and materials, but in the end, the chemistry and the process by which the batteries charge and discharge electricity remained the same.

Lithium-ion chemistry, more recently introduced, can be confusing as there are several different chemistries all called “lithium-ion.” From a chemistry perspective, the safest lithium-ion batteries are lithium iron phosphate, often seen written as LifePO4, or simply LFP. However, there is a lot more that goes into a lithium-ion battery than chemistry. Well-built batteries with theoretically more volatile chemistries, such as nickel manganese cobalt (NMC), for example, will be safer than poorly built LFP batteries.

The most important thing to know about any electrical system is the principle of Ohm’s Law. In a nutshell, “ohms” are a measure of resistance in an electrical circuit. It’s why you need to size wires correctly—in order to overcome this resistance. The larger the wire diameter, or gauge, the less the resistance. Greater resistance = greater heat generation, which can lead to fire. You can never go wrong by going up a wire size if you’re on the edge between two gauges.

Resistance is also present in a battery’s internal chemistry, with higher resistance in a lead-acid battery than lithium-ion, especially as the battery reaches full capacity when charging. This is arguably the biggest practical difference between lithium-ion and lead-acid chemistry.

When you charge a “dead” lead-acid battery, it will accept lots of amps, or current, at first. However, as its charge percentage increases, so does both the voltage and the battery’s internal resistance.

You’ve probably heard this before: it’s easy to charge a battery from 50 percent to 85 percent state of charge, but it takes a long time to get that final 15 percent. Internal resistance is why. This becomes especially important whenever you’re using your diesel or a genset for the sole purpose of charging up again, because that last 15 percent represents a very inefficient use of fuel. Motoring through a calm and charging by default is really the only time you’ll get that last 15 percent of charge in the real world.

There is something else. When a lead-acid battery is charged and discharged, there is contraction and expansion of the active material in the battery. The deeper the discharge the more the movement and the greater the likelihood of internal shedding, which results in a loss of capacity. To minimize this, in normal use we typically try not to discharge even quality deep-cycle batteries much below a 50 percent state of charge. As a result, in the real-world the usable capacity of any given lead-acid battery bank will only be about 35 percent of its rated capacity.

The big fuss over the dangers of lithium-ion has to do with something called thermal runaway. What this means is that if the internal temperature of the battery gets above a certain threshold, a negative feedback loop is created whereby an increase in temperature creates a further exponential increase in temperature. All chemistries other than LFP can reach temperatures that cause the battery to catch fire, and even LFP can create internal shorts and other failures capable of sparking a flame. These kinds of internal temperature increases can be caused by a number of things, including a fire somewhere else on the boat. Once a battery catches fire, it is very hard to extinguish it. LifePO4 stands out because it has a higher thermal runaway initiation temperature than most other lithium-ion chemistries; has a slower temperature rise once thermal runaway initiates; and it typically does not rise to self-ignition temperatures, making it is less susceptible to this type of disaster. That tradeoff is that the battery isn’t as energy dense as some other lithium-ion types.

To mitigate the risk of thermal runaway, all lithium-ion batteries use something called a battery management system, or BMS, to protect against various potentially unsafe conditions, in the simplest case by disconnecting the battery, or in the case of more complex BMS’s by sending instructions to the various controllers, generating alarms and alerts, etc. Should a fault occur somewhere in the system that threatens the battery, the battery effectively shuts itself down before it can heat up to the point where it incinerates either itself or your boat. Think of a BMS like a circuit breaker or fuse for the batterie’s protection.

This is where the LifePO4 tech we see on boats splits into two camps:

2. The more advanced external BMS-type systems, like those manufactured by Lithionics, that you often see in some higher-end installations

So, what’s the difference? For the record, the Lithionics folks will tell you their systems are the safest in the industry, based on, among other things, the materials used. Hell, Space-X supposedly uses their products. To me, though, the biggest difference—and the reason we will use them as part of our ongoing rebuild of the Farr 65 Falken—is ease of access to this kind of BMS should there ever be a problem; that and the fact the BMS itself is more advanced.

For example, if the external Lithionics BMS we will be using finds a fault on the charging side, it will shut down the current input to the battery but still allow us to discharge the battery and use it (and vice versa). An internal BMS, on the other hand, would simply shut down the battery, end of story. (Note: not all external BMSs do this, not even all Lithionic’s BMSs.)

Thermal runaway aside, lithium-ion batteries also differ dramatically from lead-acid with respect to their charging parameters. Where it is not recommended to routinely discharge lead-acid batteries below 50 percent of rated capacity, for example, lithium-ion batteries can be safely discharged down to 20 percent. Due to their lower internal resistance, the recharge time to get back to 100 percent state of charge can also be much faster, as the voltage in the battery won’t hit that regulated “ceiling” until the battery is nearly full. In other words, the amps going into the battery will not decrease until very late in the charging cycle.

Finally, you can do the discharge-recharge cycle many, many times more than you can with a lead-acid battery before you start to see a measured loss of capacity. This in turn means the price per amp-hour, while much higher initially, goes way down over time.

Ultimately, there are four main benefits to switching to lithium-ion. These include:

2. Increased time between charges due to that same increased capacity

3. Faster recharge times due to the lower internal resistance and high charge acceptance rates to high states of charge

It’s important to note, however, that these four benefits all assume nothing else in your boat’s electrical system changes aside from the necessary adjustments to your charging parameters to accommodate the new battery chemistry. Unfortunately, in the real world, that’s usually not how it works. The temptation with all that extra available energy lithium-ion provides is to add more energy-hungry appliances, which means increased complexity across the board. This in turn means those three aforementioned benefits will all start to disappear as you find yourself using more and more power for longer periods of time. Along these same lines, if you don’t upgrade your alternators, you’re still going to have long recharge times to top off all that extra usable capacity. Keep things simple, though, and the benefits of lithium-ion really start to stand out.

My wife, Mia, and I currently have a set of drop-in style lithium-ion batteries on our family boat, Spica, as do a bunch of my friends. We only sail Spica close to home in Sweden, which means much lower stakes. In this application, Lithionics and its external BMS would have been overkill.

Spica is a solidly built 1977 Norlin 34 with an extremely simple electrical system, which I rebuilt from scratch last spring. Her energy system consists of:

Equally important, thanks to the batteries’ very low internal resistance, I can recharge them 70 percent faster than if they were lead-acid, since the voltage will not increase and hit the recharge ceiling until the battery is nearly fully charged. In the real-world, this means on my 200 Ah bank I now have about 150 Ah of usable capacity that takes about the same time to charge back up as the 70 Ah of usable capacity on the lead-acid. Better still, since I barely have any loads on the system to begin with (we don’t even have a pressure water pump), and we do have a 50W solar panel, our net daily usage is close to zero. In practice, when Mia and I cruise on Spica, we are never running the engine solely for the sake of charging. The charging happens by default when motoring in and out of ports.

Ed Note: Next month Andy will look at Falken’s overall electrical system and the pros and cons of induction versus propane cooking