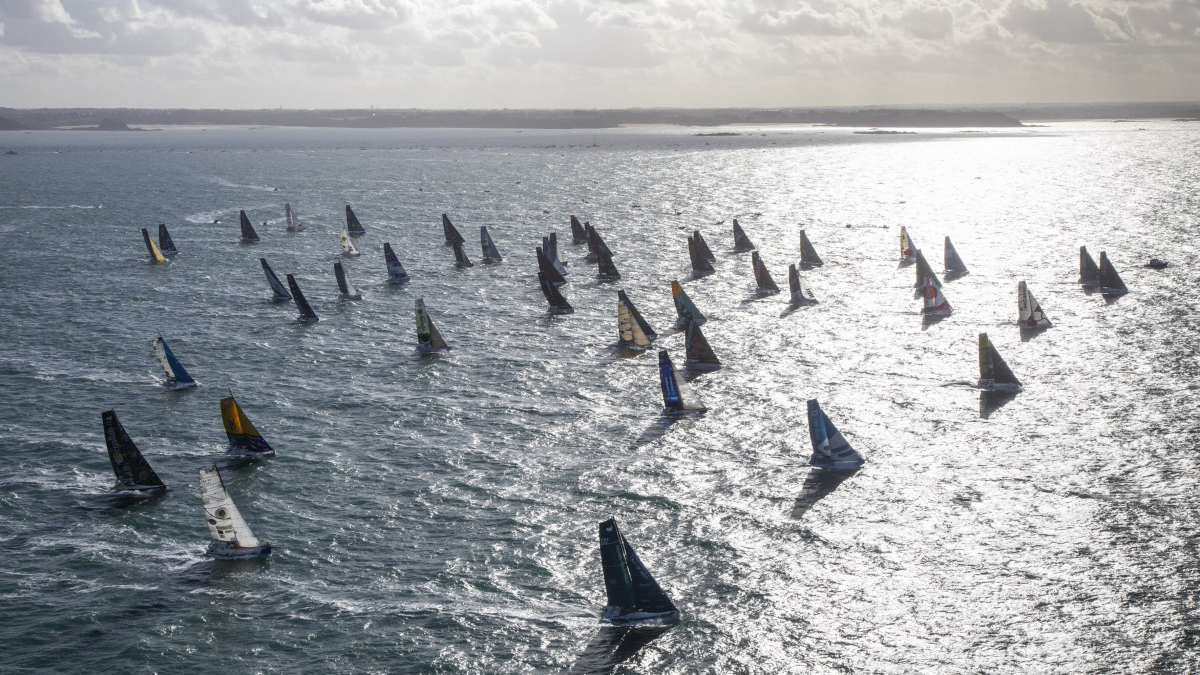 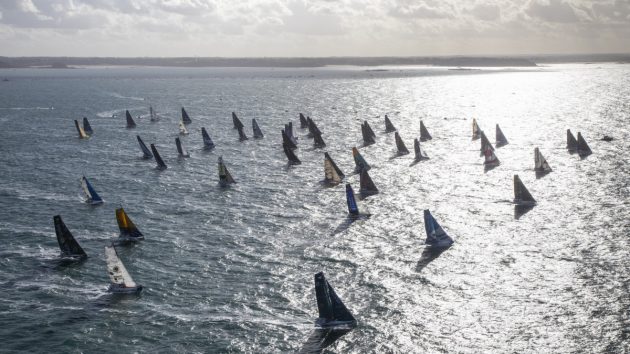 With 138 single-handed boats on the line, the 2022 Route du Rhum start was always going to be spectacular.

Three days later than originally scheduled, thanks to a severe depression and sea state forecast for the North Atlantic, the 2022 Route du Rhum started today in a near-perfect south-westerly of 11-15 knots with sunshine.

All 138 entries – from the giant 100ft Ultimes to the smallest 40-footers – set off upwind from the same line, the largest multihulls furthest out to sea, the huge 38-boat fleet of IMOCAs looking for clean air in the middle, while the 55 Classe 40s ducked and dived around each other at the inner marker as if they were about to start a local club race, not a transatlantic against a multi-million Euro fleet. 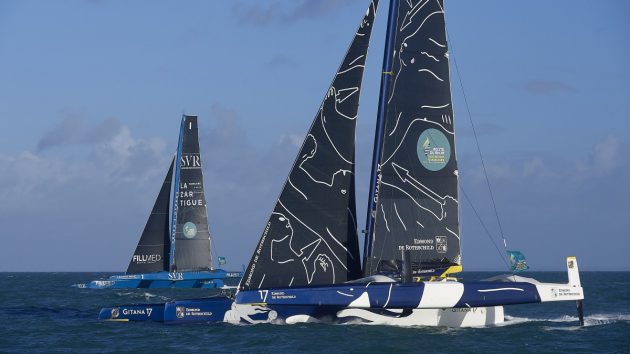 Photos: Close racing for the Ultimes from the start of the 2022 Route du Rhum. Photos: Philpre Arnaud/Route du Rhum

Despite the fact that the race is 3,542 nautical miles to Guadeloupe, there were several boats called OCS at the startline, including the overall leader, Charles Caudrelier on the Gitana Ultime (Maxi Edmond de Rothschild). The standard time penalty is four hours.

There was an incident early in the Ocean 50 class, when British skipper Sam Goodchild, the 32-year-old skipper of Leyton, was injured in the pre-start and had to be evacuated ashore to hospital in Saint Malo. He was reported to have injuries to his arms and face.

A statement from the team this evening said: “Whilst trimming the sails of his Ocean Fifty Leyton during the start phase Sam Goodchild suffered injuries to his arms and face. A technical problem caused the pedestal winch to backwind and he was hit hard by the handles. He was evacuated from the boat and taken to hospital by doctors. He was able to see his family. It is with deep sadness that he is forced to abandon the Route du Rhum-Destination Guadeloupe.” 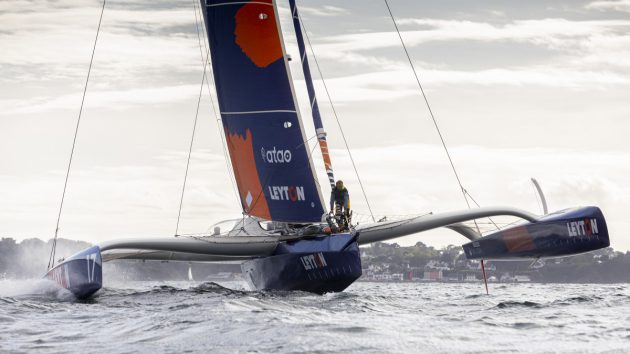 Two IMOCAs have also returned to port after being involved in a port-starboard collision approaching the Cape Fréhel buoy, around three hours after the Route du Rhum start. Ollie Heer (Oliver Heer Ocean Racing) and Kojiro Shiraisihi (DMG MORI Global One) both suffered damage, the most obvious being damage to Heer’s bowsprit and pulpit whilst DMG MORI has damage to the starboard side which is being assessed tonight. Both teams will be reviewing to see if it’s possible to repair and restart.

Heer explained: “I am gutted to say the least. It was a port-starboard incident at the Cape Fréhel gate. I was on starboard and Koji on port. I decided that even though I would have made it through the gate, I decided to hitch closer inland to get out of the tide.

“I tacked over and was a couple of minutes into the tack and was about to pull the windward daggerboard up and there was a massive bang. I was thrown into the pit. I was convinced he had seen me. But now there is huge disappointment and frustration, we have worked hard to get here.

“But we have until Saturday to get it repaired. We are optimistic. The biggest damage is the bowsprit, the crash box took most of the impact and we have a minor hole in the port side. We have a lot of people supporting us. I have Pete Hobson, who was the designer of Alex [Thomson’s] Hugo Boss, on the way here on the ferry. And we will try everything to get going again. We are optimistic.”

On the dock Koji apologised, saying, “We were on the same tack near the mark and he tacked and I did not see him coming. Then the buoy was really close and I could not avoid him. The damage is really big but at the moment I am really glad Ollie is fit and healthy.” 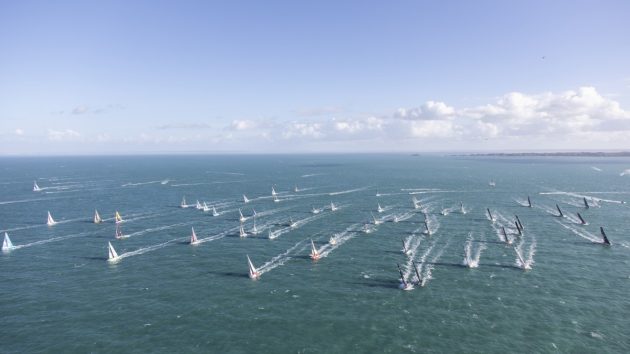 In the 38-strong IMOCA fleet Charlie Dalin on Apivia was first past the first rounding mark of Cape Fréhel. Going into the first night, his nearest rivals were Kevin Escoffier on the new Holcim-PRB, and long-term rival Thomas Ruyant on LinkedOut, who had both taken an inshore line along the Breton coast.

Although the fleet will avoid the most severe weather (50 knot gusts and 6-7m sea state) forecast, thanks to the start postponement, that same front has left some tricky conditions for the skippers to contend with, and are likely to face wave heights of up to 4.5m as they exit the English Channel tonight. 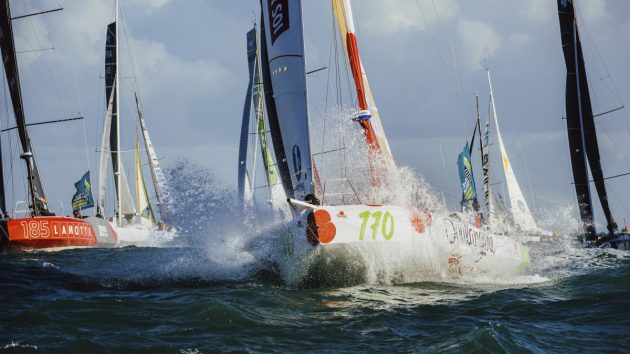 Close racing for the largest fleet, the Class 40s, from the outset. Philpre Arnaud/Route du Rhum

The first major decision will come overnight, as skippers have to decide whether to sail to the North or South of the Traffic Separation Scheme off Ushant. Caudrelier looks to be the first to have tacked to the south-east of it, and was sailing at 30+ knots this evening.

A front stretching from the west of Scotland to the Azores is currently generating stronger winds to its east, though that is likely to also generate heavier seas. An alternative route will be to cross the Bay of Biscay towards La Coruna, although this option will involve an additional number of tacks upwind.