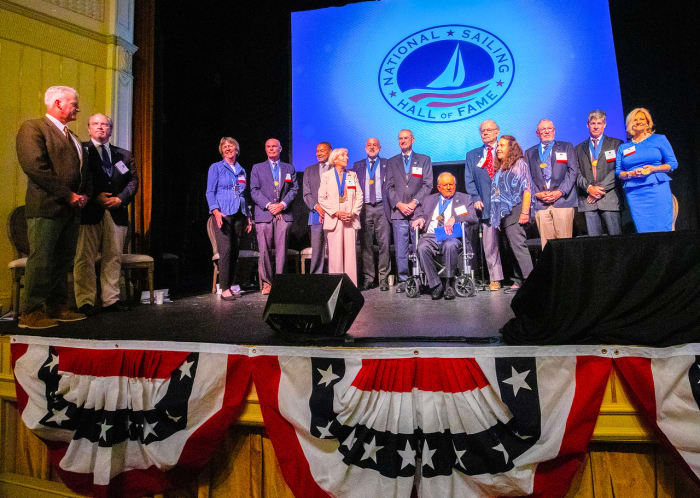 Legendary cruising and racing sailors, sailing education advocates and coaches, innovators in boat and sail design, and mariners past and present who have effected positive change—all were among the National Sailing Hall of Fame’s Class of 2022 celebrated at an induction ceremony and dinner last weekend in Newport, Rhode Island.

“The National Sailing Hall of Fame recognizes excellence in competition, innovative creativity, and contributions to the sport, as well as a lifetime of achievement and service,” said Gary Jobson, Hall of Famer and board member. “We have a full roster of inductees this year and every one has a very different story. They are all deserving of this honor, and we congratulate them all.”

This year’s class truly spanned the breadth of sailing and the remarkable individuals who make up this sport. Among the inductees were legendary “go simple, go small, go now” sailors Lin Pardey and her late husband, Larry, whose journeys aboard their engineless wooden cutters Taleisin and Serrafyn have inspired generations of cruising sailors. At the other end of the spectrum were two-time Olympian Jonathan McKee—who has won nine world championships in designs ranging from the Melges 24 and 32 to the Tasar and Flying Dutchman—and the late Roy Disney, who “set a high example as a top competitor, visionary, and philanthropist.”

Doris Colgate, who with her husband, Steve, founded Offshore Sailing School, was lauded for her dedication to making sailing more accessible to hundreds of thousands of people, while Francis “Frannie” McElwain Wakeman, who won the Adams Cup—the North American Women’s Sailing Championship—four consecutive times from 1935 to 1938, was honored posthumously as a “tireless advocate on behalf of women who raced.”

Also posthumously inducted was Nicholas Salvatore Scandone, who with his crew won gold at the 2008 Paralympic Games in Beijing while battling ALS (also known as Lou Gehrig’s Disease); he succumbed to the devastating illness just four months later. And, Absalom F. Boston, a Black mariner who at 37 years old in 1822 commanded a whaling ship and went on to use his wealth and influence to help integrate public schools in Massachusetts, was honored for his legacy of working to improve the lives of African Americans and mariners.

“Recognizing sailors who history would otherwise forget is notable and laudable and critical to sailing’s strength,” said Richard Jepsen, president of US Sailing. “As we try to grow our sport beyond its current bounds, promoting the extraordinary careers of historic figures who might otherwise fade from history is as essential as it is courageous.”

Among the designers and entrepreneurs whose innovations and drive have influenced the sport of sailing were Bruce Farr, Bill Lee, Terry Kohler, and Garry Hoyt, while Ed Adams, who has won multiple world championships in classes including the Star, J/24, Snipe, and Laser, was lauded also for his coaching skills that have elevated his teams to win world championships in classes including the TP52, Farr 40, Melges 20, and Etchells, among others.

For more information about the honorees, visit nshof.org.