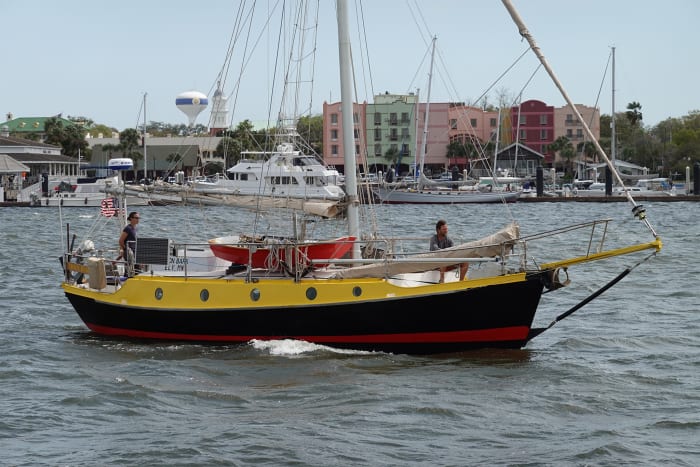 I had just picked up a mooring in the Amelia River off Fernandina Beach, Florida, this past March when I saw an unusual vessel approaching from the north under power—a gaff-rig cutter with flat black topsides under a wide bright yellow whale stripe. A tingle of recognition coursed through me as I reached for the binoculars. In an instant, I confirmed my suspicion: this was the Wylo II Iron Bark. It’s an eccentric design by Nick Skeates, 35 feet on deck, built in steel.

I had never seen this boat in the flesh before, but I had certainly heard of her. I knew she was built in Australia by her original owner, Trevor Robertson, who had cruised the Southern Ocean singlehanded and wintered over, with the boat frozen into the ice on the Antarctic Peninsula, in the year 2000. Later, in company with Annie Hill, Trevor had also wintered over—again frozen in—off the Arctic coast of Greenland in 2005. Iron Bark was, thus, the first (and possibly only) vessel to have survived winters unsupported in both the Arctic and Antarctic. I also knew that Trevor, feeling his age, had listed the boat for sale in Carriacou a few years earlier.

I at once jumped into my dinghy and went over to meet the new owners. I was not disappointed. Dave and Amy Freeman, a young couple from Ely, Minnesota, are exactly the sort of owners a boat like Iron Bark requires. Like Trevor, who won awards from both the Cruising Club of America and the Royal Cruising Club for his adventures aboard Iron Bark, Dave and Amy, I soon learned, had been named National Geographic’s Adventurers of the Year in 2014:  this for an extended 12,000-mile jaunt they made across the diagonal breadth of North America, dog-sledding, paddling and hiking from Alaska to Florida.

Indeed, it was toward the end of this epic adventure, as they were paddling their kayaks down the U.S. East Coast in 2013, that Dave and Amy first contemplated the advantages of cruising under sail. “We were pretty uncomfortable,” Dave recalled. “We were having a hard time finding reasonable places to camp, but we also saw and met lots of people on sailboats. It looked like a more attractive way to travel.”

The Freemans first honed their cruising chops on an old Ericson 27 that they sailed on Lake Superior for a couple of years. They later moved on to a more rugged Vancouver 27 that they sailed to Nova Scotia and eventually sold there. They bought Iron Bark just last year and spent some time with Trevor in Carriacou learning her eccentricities.

One of the more interesting things about Dave and Amy is that they have managed to make a living having adventures. Almost 20 years ago, Dave started creating educational programs for kids during an epic expedition across South America, bicycling over the Andes and traveling by boat across the Amazon basin. After that, and prior to the pandemic, he and Amy were creating programs for schools across the nation through an organization they call Wilderness Classroom, often doing live presentations (wildernessclassroom.org). Now, in the age of Covid, they’ve been crafting Zoom presentations from onboard Iron Bark.

The day after first meeting Dave and Amy, my wife, Clare, and I had them over to our boat for dinner. They were properly impressed with the accommodations aboard Lunacy, our Boreal 47, and talked about how large Iron Bark felt to them after living on a 27-footer. It was certainly a lot more comfortable than a kayak! They also readily admitted they are still novice sailors.

“I get really nervous handling the boat around docks,” Dave confessed. “I’m afraid of doing a lot of damage with that heavy 8-foot metal bowsprit waving around.”

That same night, Amy allowed that their plan for the season was to slowly sail north as things warmed up. Sure enough, I spotted them again a couple of months later, first on AIS coming out of Cape May, New Jersey, then later live and in person from a distance of a couple of miles. We communicated, in the modern style, via phone texts rather than VHF. They had their topsail up, flying proud over their gaff main. I texted that it looked like a great sail.

“Thanks!” they texted back. “We really need it with light winds on the stern like this.” Next, I heard from them, a few weeks later, they told me they were en route to Labrador.

piano tutorial – Snail Mail Forever Sailing outro
Sail Life – New dive compressor and port in Porto 🍷🤿
How did I become a digital nomad?
How to dock your boat with Alistair McGlashan | Club Marine
Stable Diffusion 2.0 – What you need to know!