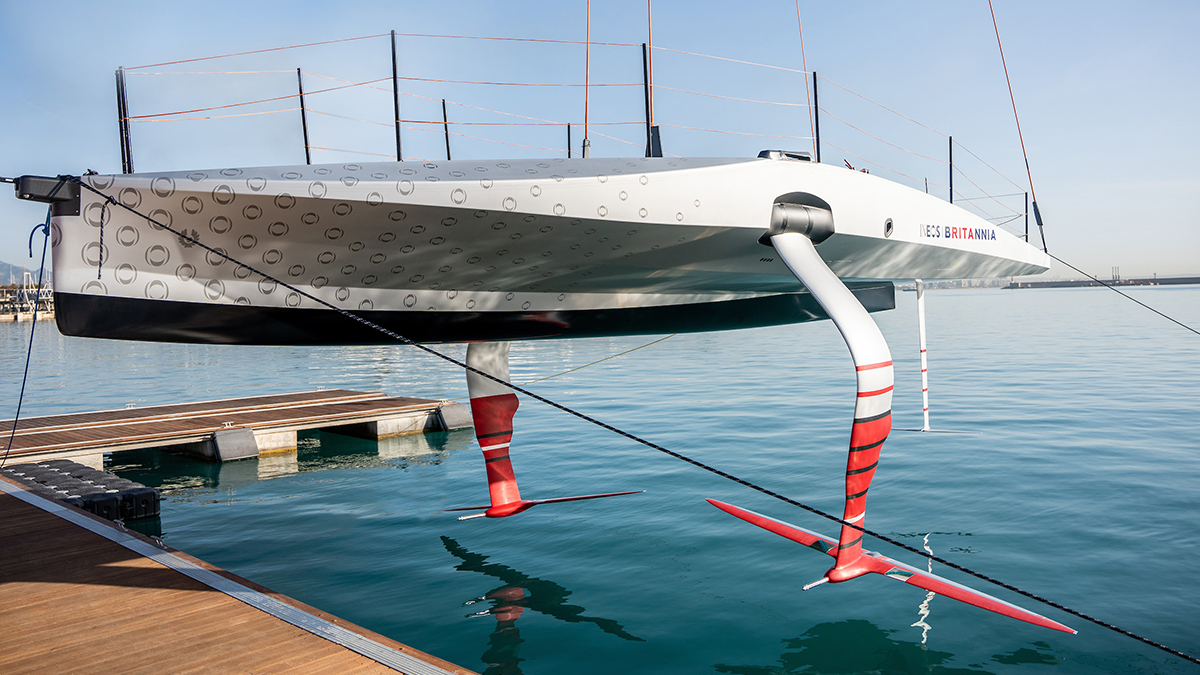 INEOS Britannia has unveiled its new ‘LEQ12’ America’s Cup test boat, T6, while activity among all the teams has ramped up with two years to go until the 37th America’s Cup 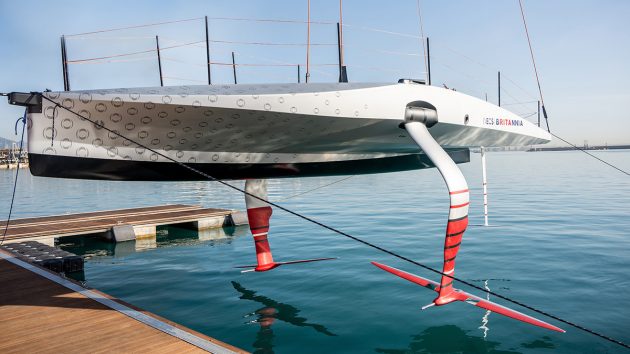 INEOS Britannia has launched its first America’s Cup test boat. Code-named T6, the test boat is known as an ‘LEQ12’ , a scaled down foiling monohull which may be used for testing design developments, in addition to the one-design AC40 which all Cup teams have to purchase.

T6 was built at Carrington Boats in Hythe, then transported to Brackley, UK, the home of the Mercedes-AMG Petronas F1 team for its fit out – the biggest design and engineering project so far for the partnership with the motorsports team. It was launched at the team’s new winter training base in Palma, Mallorca.

As Challenger of Record, one of the British team’s key inputs into the Protocol for AC37 was that teams retained the option of building their own scaled down development boats in addition to the AC40s. It was agreed that these America’s Cup test boat (or towing platforms), must be between 6-12m in length (hence LEQ12, for ‘less or equal to 12’).

Team skipper and CEO Ben Ainslie explained one of the key reasons why the team invested in an additional boat: “We came out of AC36 lacking confidence in our design tools. Ultimately, we made key design decisions in the last Cup using our design tools and our simulation, and they weren’t accurate enough. This was borne out in the end result, across our hull, foil designs and performance.

“T6 is a fantastic opportunity for us to be able to validate our design tools and have more confidence in them, as we go into designing the key components for the race boat for Barcelona.” 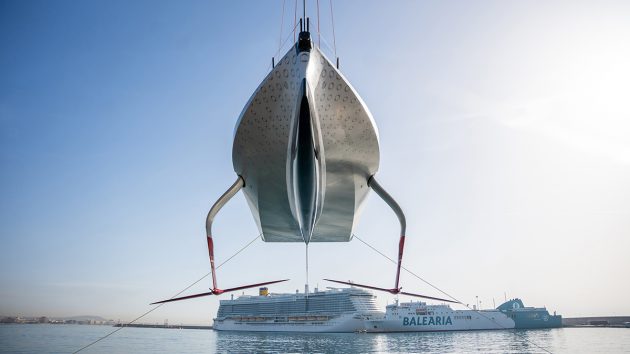 The new boat is also a test-run for working with Mercedes-AMG before building their new AC75. “It’s a big deal trying to bring two design groups together and define common working practices and everything else that goes into designing a successful America’s Cup boat,” Ainslie explained.

“We had the opportunity to do a dry run with T6 before we design and build the race boat for the Cup, and it was really important to us to take that opportunity. It’s highlighted a number of areas where we’ve been able to modify our approach and the overall structure of the team for the better.”

“Lastly, while it’s fantastic to see Emirates Team New Zealand put out the AC40 – and that boat will undoubtedly get a huge amount of use both as a testing platform and a racing platform – we wanted to control our own destiny.

T6 will start to be used for an extensive testing period aimed at validating the team’s design tools and testing key components before the deadline to start the build of the team’s AC75 race boat. Initially, that will involve more tow-testing than sailing.

“We have a long list of tow tests that we want to do to validate the information from our design tools,” said Ainslie. ” The best way to do that is without the variability in the wind, we don’t want unknown aerodynamic influence on what we are measuring. 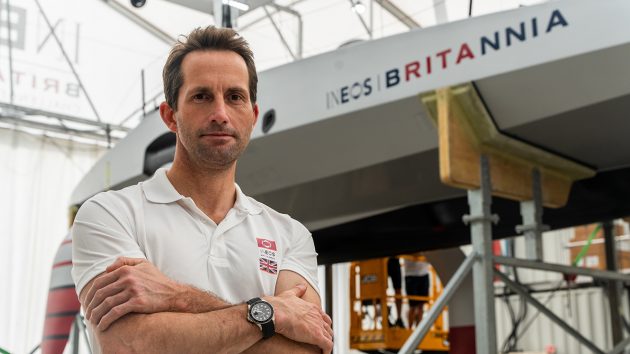 Ben Ainslie, team principal of INEOS Britannia, at the team’s winter training base in Palma

“As we all know, the wind at different heights in the rig is very hard to measure accurately, and therefore hard to model accurately. So we want to take that uncertainty out of our initial testing program with T6, so we can be more accurate in the  performance data that we will collect, and in the validation of the design tools with that data.

“The validation of these tools is really key at this stage. We’ve seen a big step in America’s Cup simulation tools, they enable us to try so many more variations of design philosophy and options than ever before, which is fantastic. However, you have to have really strong confidence in those simulation tools, and trust that they’re actually giving you accurate feedback. All of the teams know this and try and do the best job they can to create the most accurate tools, which will then help them design the fastest boat.”

While T6 will send the winter at the team’s new base in Palma de Mallorca – which is being headed up by Giles Scott – all the live test data and results will be streamed back to the design, engineering and performance teams at the team’s UK headquarters in Brackley.

The British boat will be battery powered and, when sailed, will have a crew of four.

Meanwhile momentum is building among all the Challengers, with activity increasing among every team. The new official ‘recon’ programme means all the teams’ launches and sailing days are observed and recorded.

Luna Rossa Prada Pirelli was first to launch an ‘LEQ12’ America’s Cup test boat, splashing theirs a couple of days before INEOS in October. Despite its ‘dazzle ship’ livery, it bears closest resemblance to the ETNZ winning AC75 from last year. 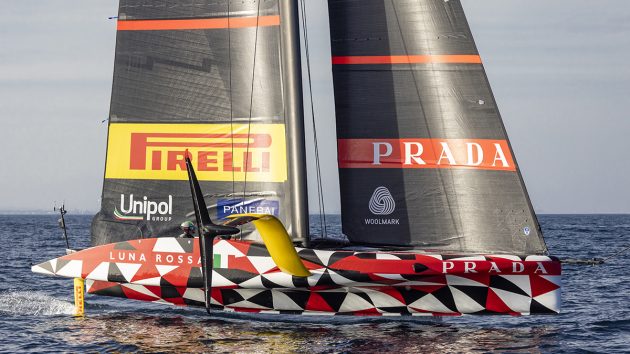 This could give the team an opportunity to not only speed trial, but potentially match race train with multiple helmsmen – both Tom Slingsby and Paul Goodison are signed with the American team.

American Magic has also relaunched Patriot, the AC75 which suffered a dramatic crash landing during the Prada Cup Round Robin last January, sailing on their home waters of Pensacola, Florida. A recent sponsorship deal announced with Sram, ‘the world’s most innovative bicycle component manufacturer’, makes it clear cyclors will be returning to the American entry. Under Version 2 of the AC75 rule pedal-power is once again allowed. 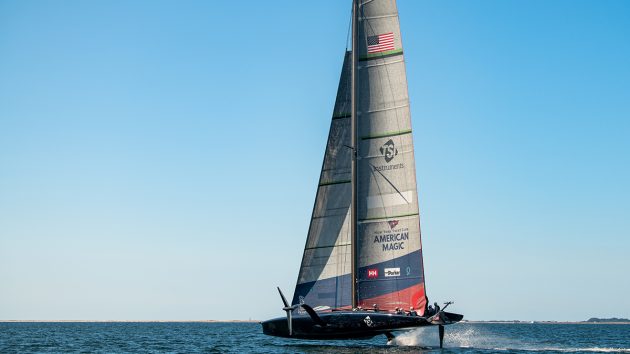 American Magic has updated and relaunched their AC75 Patriot in Florida

British INEOS sailors also seem to be spending a large amount of time pedalling around Mallorca – a mecca for road cyclists.

The Alinghi team has been training on its AC75 off Barcelona – after last month’s capsize under tow the team has experienced more tough conditions, with a nose dive in waves causing them to blow out the clew of a headsail.

At least one home team will line up against the four Cup contenders for these events, with Sail Team BCN, representing the Real Club Náutico de Barcelona, competing in both the Youth and Women’s America’s Cup 2024. The team will be led by Spanish pro sailor Guillermo Altadill and managed by Stewart Hosford, formerly of Alex Thomson Racing and now with Origin Sports.

Meanwhile, Iain Murray has been reappointed as Regatta Director and Richard Slater continues in the role as Chief Umpire, both reprising their roles from AC36.

3 Easy Ways to Make Coins in FIFA 23
Chartering: Swan Song in the BVI
Why Anchoring Like the Swedes is Scary! [S5E10]
how to selling on Instagram English tutorial -7 #facebook #instagram
Increase Conversion Rates On Etsy By Offering Sales & Coupons 🤑 (Full Tutorial!)