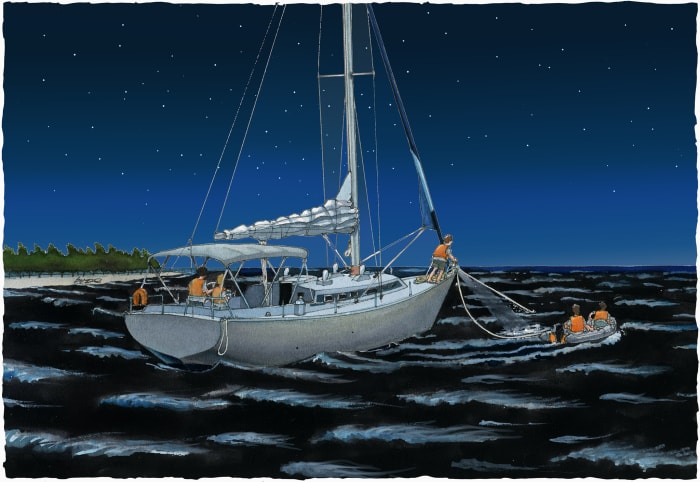 Our anchoring adventure took place a few years ago as my family and I were nearing the end of a weeklong bareboat charter along the west coast of Florida. With me was my wife, Diane, our son and three of his high school classmates. The boys were all age 16 and inexperienced sailors. We had scheduled the charter out of St. Petersburg during the boys’ spring vacation.

Our Moorings charter boat was the Beneteau 51 monohull, Loosha Lady, with four berths and two heads. She was an older but clean and well-appointed boat that the Moorings was chartering out of its Florida base at the time.

We had traveled south uneventfully in good weather as the boys became acclimatized to the sailing life. We sailed past Longboat Key, Sarasota, Venice and Boca Grande to Charlotte Harbor, where we turned around. Sailing back north we explored a portion of the Gulf Intracoastal Waterway and some more interesting keys and bays.

Diane and I are enthusiastic sailors and had bareboat chartered 11 times before in the Pacific Northwest, the British Virgin Islands and the Leeward Islands as well. We have also taken a number of boating and navigation courses and read extensively about sailing, mooring and anchoring. We’d never experienced any major problems under sail and considered ourselves fairly competent sailors.

As we sailed north the last full day of our charter, we found we were too far away from the base to reach it by dark. We decided, therefore, to anchor for the night at Cabbage Key just east of Fort Myers, a small thin island oriented in a north-south direction. The weather forecast called for gentle winds and clear skies, nothing we had not already experienced during our week afloat. Motoring into a shallow bay on the key’s west side I considered our anchoring options. A gentle breeze was blowing out of the north, parallel to the shore. The bottom appeared to be sand. We saw only one other boat anchored in the far distance.

Although I had read about Bahamian Mooring in the past, I had never before attempted it and looked like a good place to try it out. This anchoring technique is helpful in keeping a boat in one place when the wind or current is expected to change direction and can be especially useful when anchoring in a narrow channel. When setting a Bahamian Moor, one anchor is placed upwind (or upstream), and another set down current, or to leeward. The boat is then secured to each rode at the bow, which allows it to turn with the wind or current, while keeping it roughly in place.

From the middle of the bay, we motored upwind and set the bow anchor about 50ft from the shore. That done we paid out some line and let the breeze blow us down to where we set the second anchor. From there we motored back upwind until we were midway between the two. Both anchors seemed well set. To avoid putting them under too much strain, I let out a few more feet of slack and secured each rode to a separate bow cleat. We felt safe and secure.

That evening we enjoyed a nice dinner of leftovers in calm water under a clear moonless sky. We reminisced about our adventures and planned the next day’s return to port. After a last check topside, we turned in. The entire crew quickly fell asleep.

“We’re hitting bottom!” Diane suddenly exclaimed hours later in the middle of the night. Sure enough, I could feel a bump that seemed to coincide with the sound of waves breaking behind us. Running up on deck I looked around and it seemed everything had changed. Our stern was now pointed toward the shore with the wind, which had increased to a good bit more than a gentle breeze, on the bow. The tide had also ebbed significantly, causing our keel to hit the bottom with each wave trough.

Trying to remain calm I considered our options. Obviously, we had to move the boat quickly. However, I was concerned if I tried pulling us into deeper water by taking in on the anchor lines, I might dislodge one or both of the anchors, which would immediately put us on the beach. I therefore started Loosha Lady’s diesel as Diane rousted the boys, and three of them quickly appeared on deck. As a first step, Diane and our son put the engine in gear and slowly motored straight into the wind away from the beach, which stopped the keel striking bottom. One of our son’s friends was then sent to the bow to monitor the anchor lines, while another helped me pull the dinghy up to the stern so I could take a stab at doing something about the anchors.

Because of the swells it was difficult for us to climb into the dinghy, but we eventually succeeded. As my son’s friend held us to the sailboat’s stern, I lowered the outboard. Thankfully it started on the second pull, and we motored up to the bow, where we grabbed one of the anchor lines. From there, as Diane kept Loosha Lady off the beach, we motored gently ahead, pulling ourselves hand over hand to one of the anchors. Fortunately, it came up easily, and we placed it into the dinghy, taking care not to foul the rode on the prop as we shuttled the anchor upwind as far as the rode would allow and dropped it in again. When my son’s friend up at the bow pulled the line tight it seemed to set, so I asked Diane to ease back the throttle, while leaving the engine in gear. As she was doing so, we retrieved the second anchor with the dinghy and repositioned it upwind as well, at an angle to the first. The crew on Loosha Lady’s took in on this rode as well. Again it seemed to hold.

Back on board, we all breathed a sigh of relief. However, any more sleep that night was out of the question, and we were only able to really relax again when we reached deep water after getting underway the following morning. The main thing is Loosha Lady had survived to charter another day. We’d been lucky.