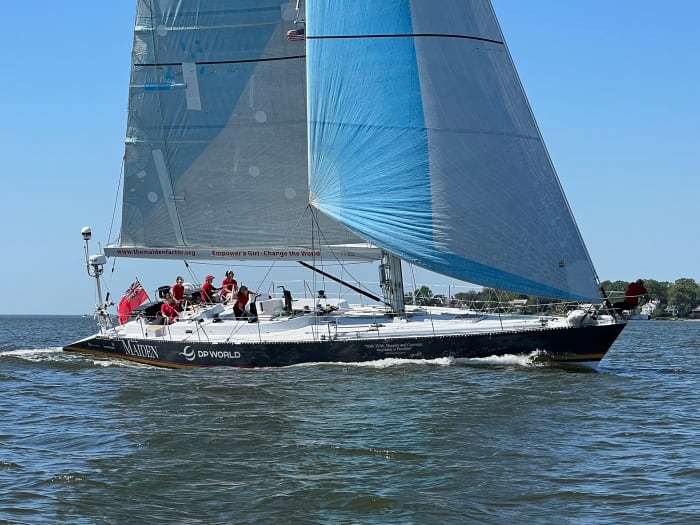 In 1989, the 58ft yacht Maiden made a splash in the Whitbread Round the World Race with the first all-female team in the race’s history. Despite intense criticism and many roadblocks, then 26-year-old Tracy Edwards and her crew won two legs of the race and finished in second in their fleet—the best finish of any British-flagged boat at the time. The crew also inspired a generation of women to find their place on the water. In recent years, the boat has enjoyed a further boost in fame due to a 2018 Alex Holmes documentary, which chronicles the eponymous Maiden’s Whitbread campaign with candor, grace and a wealth of spectacular historic footage, making it an instant sailing classic.

Around the same time the movie came out, Edwards launched Maiden Factor, an organization promoting girls’ education, with a particular eye toward marginalized girls hoping to go into STEM fields. Maiden began its tour in 2018, partnering with six charities that work globally to break down access barriers that prevent girls from getting an education. Like most international travel, the tour screeched to a halt during the pandemic lockdowns of 2020, but is now back up and running, with the boat having spent the summer in America for local presentations, fundraising events and advocacy work. The post-lockdown voyage will cover 90,000 miles over three years, visiting more than 60 destinations in 40 countries, including this summer’s trip up the Eastern Seaboard, with stopovers in Miami, Charlestown, Norfolk, Annapolis, New York City, Newport, Nantucket and more. The boat is now heading back across the Atlantic to Dakar, Sengal, by way of the Azores.

In 2014, nearly 25 years after completing the race and selling Maiden, Edwards got a call from a boatyard in the Seychelles. “They said, ‘We have your boat, do you want it?’ and I knew we had to save her,” she says. Soon afterward, Edwards launched a crowd funding campaign to pay the owed docking fees and make repairs, but the damage to the boat was so extensive it had to be shipped home rather than sailed. The subsequent refit brought the boat up to date regarding modern safety regulation standards and made it somewhat more comfortable to sail. Boat skipper (and Volvo Ocean Race veteran) Liz Wardley points out that the boat’s pipe berths were once stacked three high, and notes various areas that have been redesignated to accommodate their post-racing mission, including a spot across from the skipper’s cabin decorated with photos, children’s drawings and mementos from the boat’s career.

Still, even with the updates, walking around the boat provides some very distinct insights into a bygone era in yacht design—the largely unprotected cockpit with the wraparound coaming, in particular. “The coaming acts as sort of a ski jump that launches the water straighted into the grinder’s faces when it comes up on deck,” Wardley says of this setup in rougher weather, in stark contrast to the cockpits aboard today’s IMOCA60s, which are almost completely enclosed. Additionally, the iconic pink twin wheels are recessed into their own pockets in the deck, necessitating some big steps back up to deck-level and then down again whenever tacking or jibing.

Belowdecks, on the other hand, the boat is cozy with low ceilings, which manages to give it the feel (and grab points) of a purpose-built voyaging boat, rather than a stuffy, dated design. After being aboard, it’s impossible not to imagine heading out to sea on your own adventure.