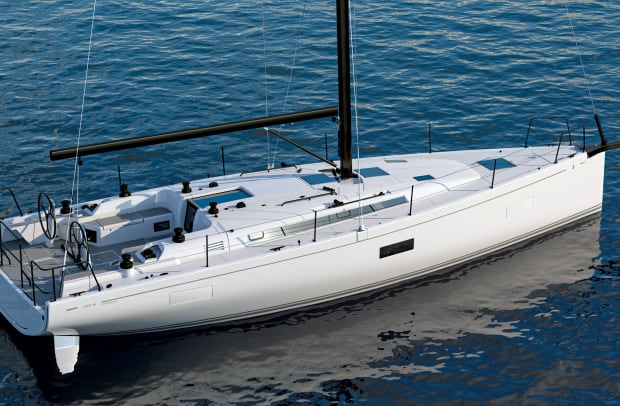 It should come as no surprise that lots of owners want a boat that can do it all. Monohull sailors, in particular, tend to love the idea of a performance cruiser that will be as at home on a racecourse as it is anchored off some remote island. Along these same lines, if there’s one thing the boatbuilding industry is great at, it’s identifying what the market wants. It only makes sense then that performance cruisers are not only at the top of their game these days, but they seem to get more impressive every season. Here are a few of the latest generation of boats built for sailors who want it all.

Beneteau’s First 44 comes as the latest in a 45-year-long tradition, completing the redesign of the classic line and filling the gap between the 36 and the 53. Two deck layout options are available catering to very different sailing styles—one standard and one designed with fully-crewed racing in mind. On the standard version, a fixed centerline block for the mainsheet, four winches and a mast set farther aft makes the design more manageable while remaining a good sailer. The mast, in particular, lends itself to flying a larger headsail and a smaller main, making it ideal for shorthanded sailing. Beneteau has also recently invested in a number of smaller performance designs, like the Figaro 2, and the racing features found aboard these boats are clearly now trickling up to Beneteau’s larger models, as seen in the 44’s twin 80-gallon ballast tanks, controlled electronically from the helms. The Performance layout has two additional winches and a foam non-skid surface that replaces the teak cockpit sole, a la its smaller performance designs. Aboard the racing version, the fixed centerline block also makes way for a traveler, and the keel and mast have been reconfigured for maximum performance. Belowdecks, elegance and comfort were clearly a part of designer Lorenzo Argento’s brief as well, as seen in the boat’s three-cabin, two-head layout. The saloon is cozy with a transversal table to port and a couch and nav station to starboard. The boat will probably draw the attention of sailors more on the “racer” side of “racer-cruiser,” but it certainly would be no hardship spending a week at sea aboard this boat either.

The popular Dehler 38 SQ has in many ways been supersized to create the line’s new flagship, the 46 SQ—with the “SQ” standing for the line’s defining characteristics, speed and quality. The new 46-footer also offers a number of other upgrades that will surely interest buyers looking to go up on LOA, like a new interior layout and performance options with the rig. On deck, the layout has been optimized for comfort while still being a true sailor’s boat, with fold-out footrests at the twin helm stations, optional sporty Y-spoke wheels, electric racing winches and an optional cockpit arch that makes for a good sheeting point for the main. For your passengers, a fully reconfigured swim platform offers great water access, and a set of coachroof sun pads are available as an option. Much thought has clearly gone into the sailplan, as can be seen in the bowsprit with bobstay and integrated anchor arm to which a gennaker or Code 0 can be attached. Similarly, Facnor Flatdeck furling allows for a longer luff and more sail area. A competition keel and rudder, taller carbon mast and Quantum high-performance sails are also available for true speed enthusiasts. Belowdecks, the hull windows have been enlarged and two more have been added to keep the large boat feeling light and airy. Four different saloon layouts allow the space to be customized to each owner’s preference. Several layouts are available with respect to the aft cabins alone, making the interior design of the Dehler 46 SQ quite flexible.

The Jeanneau Yachts 60 represents an impressive new undertaking by the renowned French builder as it aims to make available a semi-custom production yacht with no less than 19 possible layouts. The boat can also be configured in what Jeanneau calls a “Mediterranean Sport” version as well as for offshore cruising. Aesthetically, the 60’s inverted bow, hull chines, integrated bowsprit and high sheer line give it a stately “modern classic” look fitting of its proportions. Sailing performance will vary greatly depending on the options each owner chooses and the kind of sailing they plan to do, with the many add-ons that can be ordered ranging from a cockpit arch to a hardtop, spray hood, regular mast, furling mast and more. The interior looks plenty spacious while still feeling warm and bright, thanks in part to the 60’s expansive windows set into the topsides of the boat’s stepped hull. There’s even carpeting (which looks to be removable but could still cause problems in a marine environment) suggesting the boat’s designers made a point of putting comfort front and center. The master cabin is aft, which makes sense as the most seakindly sleeping arrangement for the boat’s owners. The aforementioned 16 different layouts include the option of three cabins, three heads; four cabins, four heads; and five cabins, three heads.