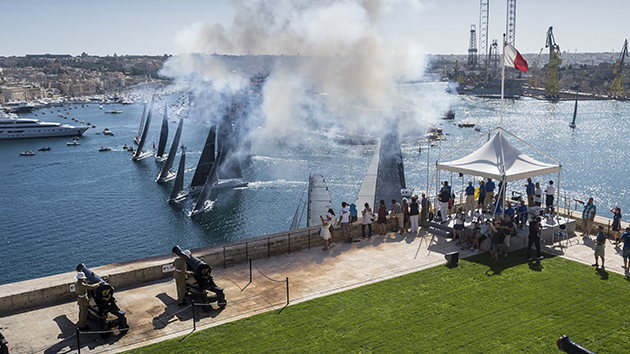 The 43rd Rolex Middle Sea Race starts this weekend from its spectacular start line in the middle of Valetta harbour, in Malta.


The Rolex Middle Sea Race is one of the classic 600-mile offshores, but the only one that takes place in the Mediterranean. Despite its scenic backdrop, the Middle Sea Race is run over a genuinely challenging course – an anticlockwise loop around Sicily which usually provides varied conditions and requires complex tactical decisions.

The race often draws some of the biggest boats on the offshore racing scene chasing for the prestigious line honours win. However, the 2022 edition of the Middle Sea Race has a surprising lack of maxi monohulls making an appearance, with neither defending champions Comanche, nor Skorpios or Rambler 88 (also past challengers for line honours) taking part this year.

The largest yacht competing in the IRC monohull fleet this year is the 100ft Leopard 3, a likely contender for monohull line honours. Their nearest challengers in size is the Wally/Judel Vrolijk-designed Bullit, at 93ft, followed by the Marten 72 Aragon.

Some of the closest racing is likely to be among the 60-70-footers, which includes Vismara, Botin and other custom designs racing against VO60, VO65 and VO70 ocean warhorses.

The start and finish of the 606-nautical mile Middle Sea Race take place in Grand Harbour, Malta. The course sees the boats sail counter-clockwise around Sicily and a number of surrounding islands.

Shortly after the start the fleet must sail along the eastern coast of Sicily and through the Straits of Messina, considered one of the most technically demanding parts of the course thanks to its challenging currents and funnelling winds: the whole event can often be won or lost in this early part of the course. Once through the Straits the course leads north to the Aeolian Islands and the active volcano of Stromboli where the yachts turn west to the Egadi Islands.

The fastest yachts will endeavour to complete the course in less than 48 hours. Last year ‘once-in-a-lifetime’ conditions resulted in the course record being broken for the first time in 14 years.
The maxi trimaran Argo set a new outright benchmark of 33 hours, 29 minutes and 28 seconds, while the100-foot Comanche established a new monohull record of 40 hours, 17 minutes and 50 seconds.

Given the near-perfect conditions last year when these record were set and some of the worlds fastest monohulls taking a year away from the race, it seems unlikely this year will be a record breaking one for single hulled racers, but if the conditions play ball, the multihull record might well still be up for grabs.

Favourite for line honours among the MOCRA entries this year will be Giovanni Soldini’s heavily modified former Multi 70 (formerly a MOD70), Maserati. Maserati has been developing an experimental foiling programme for many years and is a regular competitor in the Middle Sea Race. They will face challenges from four other non-foiling MOD70s, who’ll be hoping for a fast and furious race forecast.

Live Updates: streamed on Facebook each morning at 09:00 CEST, from Sunday, 23 October to Friday, 28 October

You can also follow the race via the race tracker at: yb.tl/rmsr2022