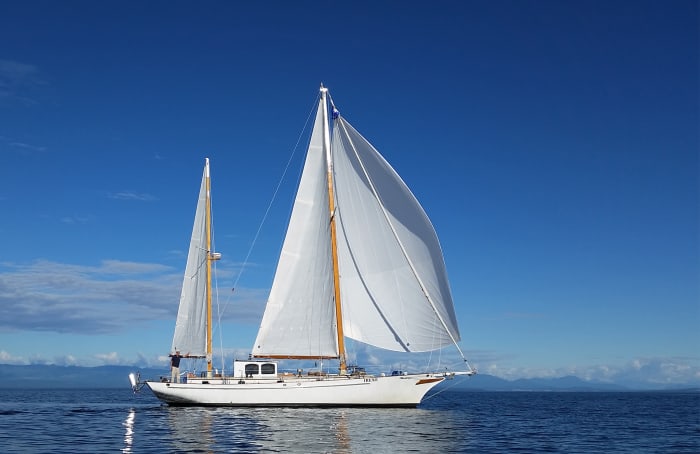 Perseverance and an embrace of adventure have always been prerequisites for sailors who earn the Cruising Club of America’s Blue Water Medal, but like everything in these pandemic-influenced times, Ginger and Peter Niemann had to take both up a notch when they completed a second circumnavigation as a way to sail home from Turkey when COVID-19 shut down the world.

The Niemanns were among several people the CCA’s members recognized at a gala dinner in Newport, Rhode Island, in September as part of the club’s centennial celebration. Among them were high-latitude legend Skip Novak, adventurer-turned-environmental-expedition sailor Matt Rutherford, and Curtis Green, whose heroism saved three people from drowning in a capsized fishing trawler.

The Niemanns, who joined sailing luminaries such as Rod Stephens, Sir Francis Chichester, and Webb Chiles as winners of the CCA Blue Water Medal, had already completed a west-about, four-year circumnavigation in a 47-foot sloop-turned-schooner in 2010. In 2017, they left Washington state again, this time in a 52-foot ketch named Irene, transiting the Northwest Passage and eventually sailing to Europe via landfall in Ireland. They were in Turkey when the pandemic began.

A CCA media release describes what happened then:

“Like international cruisers everywhere, they were stopped in their tracks, previous plans irrelevant. Unwilling to leave Irene, they considered staying in Turkey; sailing back home across the Atlantic; or heading home to the Pacific Northwest through the Suez Canal. They chose the third option, negotiating a landfall in distant Batam, Indonesia. Their of-necessity-non-stop voyage across the Indian Ocean during the monsoon to Indonesia required extraordinary perseverance…Two non-stop months and nearly 6,000 miles later, the Niemanns arrived in Batam, only to find that their permission to stay in Indonesia had been revoked. Nearby Singapore let them stay but they couldn’t leave the boat. They lived onboard at the Changi Sailing Club for five months. In all, they spent nearly 300 days aboard, unable to go ashore in any country. On February 2, 2021, they departed on the long cruise home via Japan and the Aleutians.”

In awarding the Niemanns the 2021 Blue Water Medal, the CCA said their “their teamwork, courage, good humor, flexibility, and innovative spirit are evidence of their exceptional personal and sailing mettle.” The club has awarded the Blue Water Medal since 1923 to “reward meritorious seamanship and adventure upon the sea displayed by amateur sailors of all nationalities, that might otherwise go unrecognized.”

Skip Novak, who has sailed four round-the-world races and is best known now for his high-latitude expedition sailing, won the Royal Cruising Club Trophy. The club noted his 2,400-mile voyage in 2021 in Pelagic Australia from Cape Town to remote Gough Island in the South Atlantic, “in support of a scientific expedition to eradicate an aggressive mouse population threatening albatross and other resident bird species. The voyage was completed despite seemingly insurmountable challenges of weather, location, and sea state, but also despite strict COVID quarantine and lockdown rules.”

Matt Rutherford, who singlehanded around the Americas in a 27-foot Albin Vega and in so doing became the skipper of the smallest boat to traverse the Northwest Passage, won the Young Voyager Award. “Rutherford began sailing to move past a difficult youth of drugs, rehab, prison time, and more,” the CCA noted. “Over the ensuing years, he became a mission-driven sailor and adventurer, raising money and awareness for programs ranging from accessibility to ocean pollution and high-latitudes climate-change research.” Today, he’s a leader of the Save Our Seas Foundation, supporting science, research, conservation, and education.

Curtis Green earned the Rod Stephens Seamanship Trophy for his heroic efforts in December 2019 to save three fishermen who were trapped in their trawler, Darean Rose, which had capsized in the waters just off the docks of his family’s marine supply business in Charlestown, Oregon. Using nothing but a claw hammer and finally a lead ball at the end of an outrigger, Green was able to smash through the trawler’s windshield literally seconds before the three trapped men drowned. (This story was expertly told by Kim Kavin in “Straight-Up Bravery” in the February 2021 issue of Soundings.) Green also earned the U.S. Coast Guard Distinguished Public Service Medal for his actions.

Don and Sharry Stabbert, of Seattle and Honolulu, Hawaii, once small-boat sailors who now have put more 100,000 miles on their 77-foot Northern Marine trawler, Starr, won the CCA’s Far Horizons Medal. “Aboard Starr, they have made extended circuits of the Pacific Ocean as well crossing the Atlantic Ocean and exploring the Mediterranean,” the club noted. “While operating and maintaining Starr themselves, they have developed friendships by the dozen and applied their problem-solving skills to a wide range of challenges such as upgrading a school’s computers and teaching and equipping remote islanders to build fiberglass canoes.”