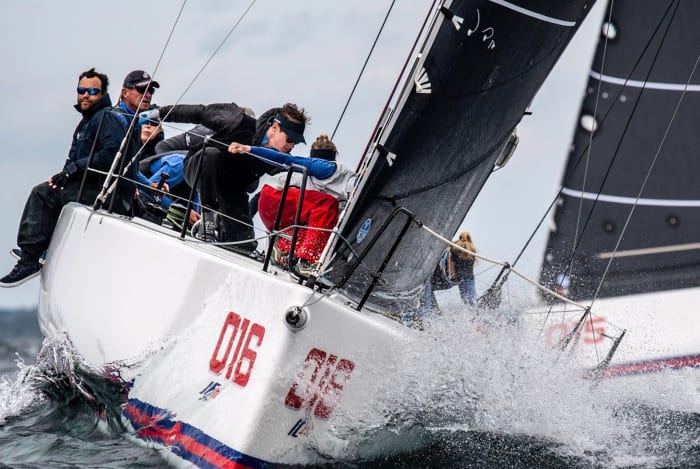 This past weekend saw 20 IC37s off Newport, Rhode Island engage in fast and furious one-design racing with the win going to Peter McClennen’s Gamecock.

“It’s huge,” said McClennen of the win. “I think of the one-designs of this club going back to the New York 30 [built in 1905]. As a classic yacht enthusiast, I think it’s one of the most special things about the club, large one-design, big-boat racing.”

In less-than-ideal conditions, the fleet of 20 had to complete the regatta in just two days, and teams that have worked together as a unit over the recent years and followed the fleet to some of its winter competitions in Florida really shone through when the races wrapped up on Sunday.

The New York Yacht Club-based fleet of IC37s is unique not only because the NYYC members come from as far away as California, Florida, and Texas to compete in the North Americans, but because the New York Yacht Club initially introduced the fleet for their biennial International Cup event, and the fleet has come into its own over the past few years with top sailors who dominate bigger boat one-design racing

“I have done this event since its first year and over time have gone from 13th, to ninth to third and now first. Our team has now been together for four years and this class is amazing especially with our espirit de corps which has been fantastic.” McLennan continued that, “to finally break through and be North American champion this year, it hasn’t full sunk in. We’ve been on the podium before, [at the 2021 IC37 North Americans] we were second, in the Melges 20 we were third, but never won [a North American or national championship].”

The collective time in the IC37 for the 20-strong fleet over the summer was evident in the crowded mark roundings and close finishes. Mistakes were punished quickly and grinding back after a poor start was extremely tough.

Being away from other boats, even if that meant taking some transoms to find the space, also enabled tactician Cameron Appleton the freedom to work the variations in the breeze, which were significant, for different reasons, on both days.

“For us, because we’ve done the Florida series both seasons, we’re very used to the waves,” said McClennen. “I’m more comfortable in those waves than if we only sailed inside [Narragansett Bay].”

Entering this fleet for new owners or chartering teams represents an opportunity to race in a fleet that has an amazing amount of talent, including many top female sailors like Hannah Swett and Cory Sertl. Six of the boats in the top TK had more women onboard than men, and the event had 53 women racing, making up 25% of the sailors.

Swett, who has been a regular fixture in the IC37 in recent seasons, said that the racing is highly competitive. “As women sailors, we feel we are just as competent as the men,” Swett noted. “What I will say is that since these are big boat one-design boats, we are all very equal and you cannot even make one small mistake in this fleet. It is that close.”

The North American championship was the final event of the 2022 IC37 Summer Series. While Gamecock was the best team on the water this weekend, the season championship went to Steve Liebel’s New Wave.

Liebel sailed in the class prior to this year but purchased his own boat last fall. “We had one goal, win the summer,” says Liebel. “We knew coming in you had to get top five in the major regattas and then top two in the ‘B’ regattas. We thought if did that we’d be in good shape. And it turns out, that’s what we did.”

A total of 15 boats qualified for the season championship, a strong indication of the strength of the class.