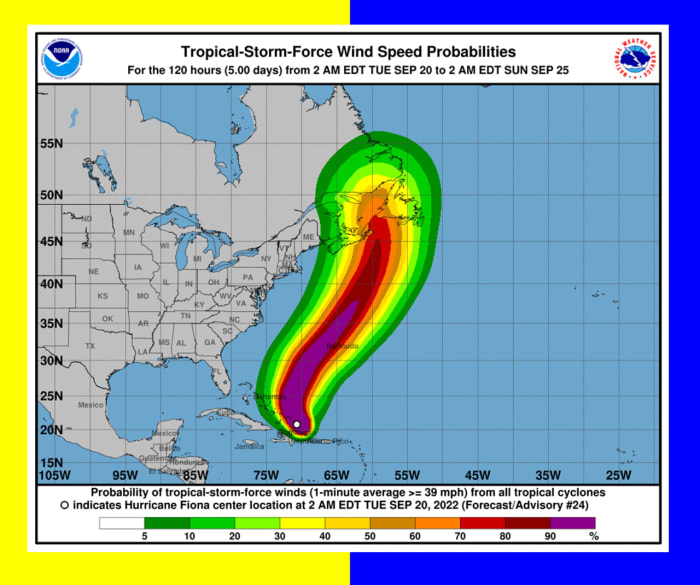 There’s so much going on in the news that you would be in good company if you didn’t realize the first major storm to hit the Caribbean was in full force. Hurricane Fiona is currently raging over the Turks and Caicos and is projected to make its way north in the coming three days.

Puerto Rico was hit particularly hard, with a near-total power blackout and more than one million people without running water. National Guard troops have rescued hundreds of people stranded by mudslides and flooding, but the crisis continues. The U.S. territory hadn’t fully recovered from the last direct hurricane hit which destroyed the power grid, exacerbating Fiona’s power and infrastructural damage.

Hurricane Fiona is not expected to make landfall in the continental U.S., but will likely hit Bermuda hard and may reach Canada’s Gulf of St. Lawrence by the end of the week. As the system travels north, it will cause elevated sea states and difficult conditions along the Eastern Seaboard. NOAA’s National Hurricane Center has issued advisories for the Atlantic.

The 2023 hurricane season is off to a bit of a delayed start, with Fiona being the latest first major hurricane of the season in 20 years. Despite that, NOAA still predicts that the season will be more active than the 30-year average due to a warmer than average tropical Atlantic and analysis of La Niña.

Look after each other and stay safe out there.

For more information, click here for NOAA’s forecast maps and here for the NHC’s public advisory.

Rafted Up in the Grenadines! – S4:E33
The Ocean Race: All set for leg two
BONDEE! THROW A MESSAGE IN A BOTTLE! HOW SAILING WORKS?!
What’s it Like to Sail a Legend?
The Ocean Race: Leg underway in very light winds