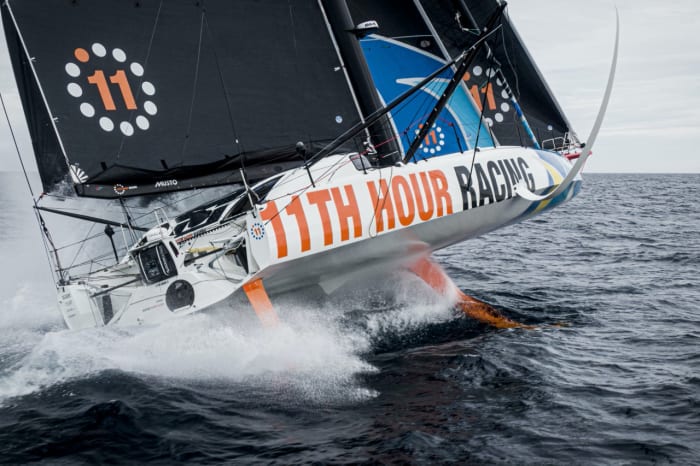 With IMOCA 60s gaining more attention globally due to their inclusion as the principal class in The 2023 Ocean Race, events like Le Défi Azimut are suddenly in the spotlight. If you’re a new fan of the IMOCA class, here’s what you need to know.

What makes Le Defi Azimut so special is that it’s a “showcase” regatta designed to put teams through their paces with different events. Think of a track and field athlete running the 100m, the mile, and hurdles. This results in a sort of proving arena that exposes a boat or team’s strengths and weaknesses. And since all IMOCA 60s are slightly different, that information is vital in future events like the Vendée Globe or Ocean Race.

The first event is a speed run in which teams attempt to post the fastest time over a one-mile course. The second event is the longest, a 48-hour offshore course aimed at replicating some of the varied conditions these boats might encounter when racing longer events. And finally, a fleet race around the Île de Groix concludes the showcase.

29 IMOCA 60s will be at the start line in 2022, four of which will be competing in the fully-crewed configuration as practice for The Ocean Race. This is the final opportunity to face off against in-class opponents before the start of The Ocean Race, which is undoubtedly in the back of everyone’s minds this week, especially with so many new and retrofitted boats hitting the water.

The IMOCA 60 is a monohull box-rule class that has been around for decades, resulting in several generations of innovations, including the relatively recently introduced (and still occasionally elusive) reliable foils. Historically, these boats have been built primarily for Vendée Globe campaigns, meaning they’re set up for a solo skipper. However, The Ocean Race is driving some of the latest generations of boats to be optimized for a crew. According to Mark Towill, CEO of 11th Hour Racing Team, this means the designs don’t have to focus on average speed under autopilot anymore and can push for greater performance around the clock as conditions change.

For Towill and his crew at 11th Hour Racing Team, this is one of the first and last opportunities to test their IMOCA 60. “It doesn’t matter how much you push yourselves in training, there’s nothing quite like the reality of direct competition,” says skipper Charlie Enright “The Défi Azimut is such a unique event with the speed runs, the 48-hour race and the sprint around Île de Groix. There’s no other race quite like it. We’re going to enjoy being back out fleet racing again.”

After launching their boat Mālama a year ago, 11th Hour Racing Team immediately competed in the 2021 Le Défi Azimut and then Transat Jaques Vabre, both of which can gently be described as “a learning experience” for the team. “When Charlie and Pascal [Bidégorry] got to the finish of the Transat Jaques Vabre, they were completely shattered,” remembers Towill. “Those are ultimately team building and defining moments that you can take a lot away from.” Still, even with some tough luck, 11th Hour Racing Team took gold on the speed course. The team is hoping for that same fortitude in all three events this year.

For more on the race and to view the race tracker, visit defi-azimut.net/en