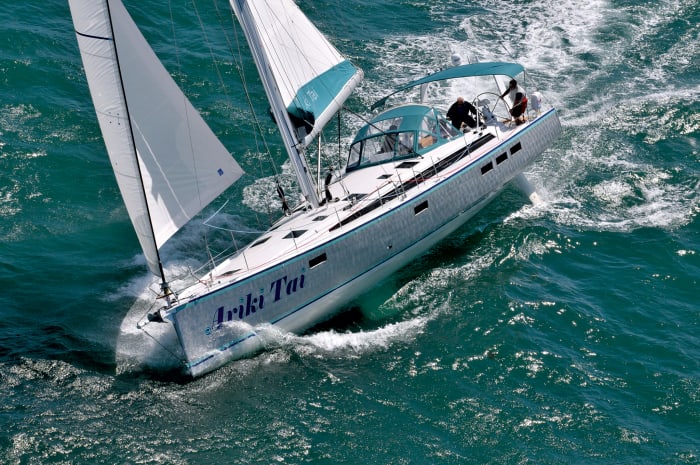 Aluminum cruising boats from French builders like Garcia, Boréal and Alubat have been gaining traction in the United States over the past several years. These heavy-duty so-called “adventure cruisers” are versatile and, of necessity, conservatively rigged, with centerboards that both reduce draft and allow owners to beach their vessels with impunity. For many years Alubat has also offered a high-performance alternative to its centerboard Ovni range, the ULDB Cigale line, which features deep fixed keels, much taller rigs and lighter construction. The first Cigale 16 ever shown in the United States appeared at Annapolis last fall, and we were anxious to get aboard.

The original Cigale 16, as designed by Jean-Marie Finot back in the 1990s, was loosely based on then-current Open 60 designs, with round bilges, tons of beam carried aft and even an option for water-ballast tanks. In updating the design a few years back, Alubat tapped Marc Lombard, who stretched the hull a bit, added twin rudders, streamlined the deck, reduced build weight, moved the mast aft and added hard chines in lieu of water ballast to boost initial stability.

The boat is entirely constructed of welded 5083 H111 aluminum, a high-grade marine alloy. Scantlings for structures well above the waterline are significantly reduced to save weight. The hull above the waterline is also insulated in cork, and interior bilge spaces are carefully painted. The keel is a fixed high-aspect aluminum fin carrying a lead bulb. A lifting-keel version is also available.

The cockpit layout on our test boat conformed to modern trends, with twin helms behind a fixed centerline cockpit table with folding leaves. A single wheel can be ordered if desired. All lines from the mast are led aft under the deck to a pair of Harken Performa 46 winches stationed either side of the companionway. There is little room for line bags here, but the owner of our test boat neatly solved this problem by hanging coils of idle line from the dodger frame.

The mainsail on our boat was controlled by two separate sheets arranged in a wide bridle just forward of the dodger, with the tails led to the companionway winches. Sheets for the jib and staysail are led above the deck to conventional deck tracks and are controlled by Harken Performa 50 and 60 winches on the cockpit coamings forward of the helm stations.

I found good handholds and deep gunwales to help keep me secure moving forward on deck. At the bow there is a huge, bifurcated rode locker with enough room to carry two full rodes. Just behind it is a large sail locker that can be accessed either from on deck or below. I also found a short, fixed bowsprit for flying Code 0-type sails and a longer retractable bowsprit for flying A-sails.

The boat’s most distinctive deck feature aft is its vast transom scoop. Hanging over it is a large fixed arch, an ideal spot for a solar array. The arch can also be fitted with a folding gantry for stowing a tender up high, davit-style. There’s plenty of room to store a tender flat on the scoop deck as well. Fixed stairs lead down to the scoop from either corner of the cockpit.

The dominant feature in the boat’s living space below is an enormous stern saloon taking up the entire space behind the companionway. A large U-shaped settee wraps around an equally large table, under which is installed the auxiliary engine. Outboard of the settee are pilot berths on either side. The pilot berths and the two longitudinal sections of the settee all make fantastic sea berths, situated right in the most comfortable section of the hull. This is also a great social space, with lots of seating and plenty of light coming from portlights in the hulls and a pair of portholes aft opening directly out onto the transom scoop.

Forward of the saloon to port, there is a large open galley boasting tons of storage space, a three-burner GN Espace stove and both front-loading and top-loading Isotherm fridges. To starboard there is a huge nav station with a swiveling stool, plenty of room for electronics and laying out charts and, again, lots of storage spaces.

Our test boat was laid out with three staterooms (a fourth is optional), all positioned forward. All the way up front the master stateroom has an offset Pullman double berth opposite a useful standing desk, with an en suite head to port. Farther back are the two guest staterooms, one with a double berth to port, another with twin bunk berths to starboard, and another communal head, also to starboard. All staterooms, I should note, have generous amounts of storage. However, neither of the heads have a dedicated showering space.

The interior throughout is nicely finished with light oak joinery and a wealth of portlights and hatches for letting in light and air.

I test-sailed the Cigale 16 off Annapolis in 9-14 knots of true wind and was properly impressed by its performance. It was both fast and closewinded. To augment the sail area on our test boat, the owner had specified a big square-top mainsail with no fixed backstays and only runners to support it, and this certainly didn’t hurt.

Sailing to windward, the boat felt fully powered up at a 35-degree apparent wind angle and made good a very satisfying 7.2 knots over ground. Pinching up inside 30 degrees, we kept moving at better than 6 knots. Bearing off to 45 degrees we accelerated nicely to over 9 knots, a pace we easily maintained continuing on down to a beam reach. Steering down to a broad reach, with the jib and no downwind sails flying, we still kept moving at a good 6-plus knots.

One thing I immediately noticed was that the helm felt different at the two wheels. When I asked why, the owner explained this was because he had set them up differently, with more friction on the starboard side, per his wife’s preference, and less friction for him to port. Quite a clever trick, I thought. At either wheel, the helm had no tendency to load up. Indeed, it wasn’t until we got into apparent wind gusts blowing over 20 knots while thrashing to windward that I felt any weather helm at all.

Our test boat was equipped with the standard powerplant, a 75hp Volvo turbo diesel turning a four-blade feathering Maxprop on a saildrive. Access to the engine, through a clever array of opening ports and hatches in the saloon table, is excellent. Sound insulation, an important feature when your engine sits in the middle of your saloon, was good.

The boat felt quite agile when maneuvering, turning sharply in less than a boatlength and with good control when backing down. To help out in tight situations, our test boat also boasted a bow-thruster.

You won’t find a boat like this anywhere else on the market! With its light but strong metal construction, its very unique interior layout and superior sailing performance, the Cigale 16 is a boat that stands alone. A boat you can sail anywhere…at speed.

Ed Note: At press time, the Cigale 16 was scheduled to be discontinued in the near future to be replaced by the new, yet-to-be-launched Cigale 15. E-mail or call SouthEast Sailing & Yachts for details