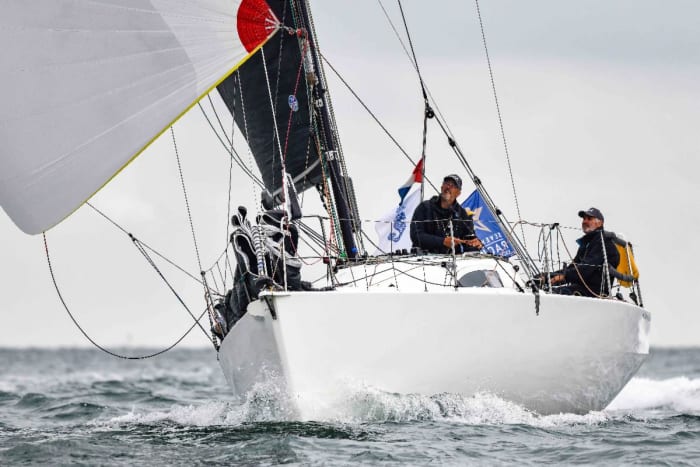 Though perhaps less well known to American audiences than the RORC’s races on this side of the Atlantic, The Sevenstar Round Britain & Ireland Race is nevertheless an impressive and exciting event. The 1,805nm course took the front of the pack 16 days to complete, with the first ten boats sprinting across the line in the same 14 hour window. In addition to being a finish to write home about, by all accounts, this concentration of boats also made for a lively dock party after.

The win was awarded to JPK 1010 Jangada with the fastest IRC corrected time by just seven minutes—made all the more notable by the fact that such a close finish followed over two weeks on the course. The double-handed crew consisted of the boat’s owner, Richard Palmer, and Rupert Holmes, who may be familiar to readers from his regular contributions to SAIL magazine.

“It was just a full-on race, absolutely no let-up; snakes and ladders all the way. The pressure was always on. Mentally this race was totally exhausting but great fun with really close competition,” said Palmer. “The final 12 hours were incredible. As soon as Bellino crossed the line the clock started ticking, and we had a goal to aim for. Our routing program predicted we could reach that goal with two minutes to spare. I woke Rupert up and told him it was game on and we went for it.”

The Sun Fast 3600 Bellino sailed by Rob Craigie and Deb Fish was second. Sam White and Sam North sailed JPK 1080 Mzungu! to a third-place finish. All three teams were racing in the IRC Two-Handed division.

For more on The Sevenstar Round Britain & Ireland Race, visit roundbritainandireland.rorc.org.