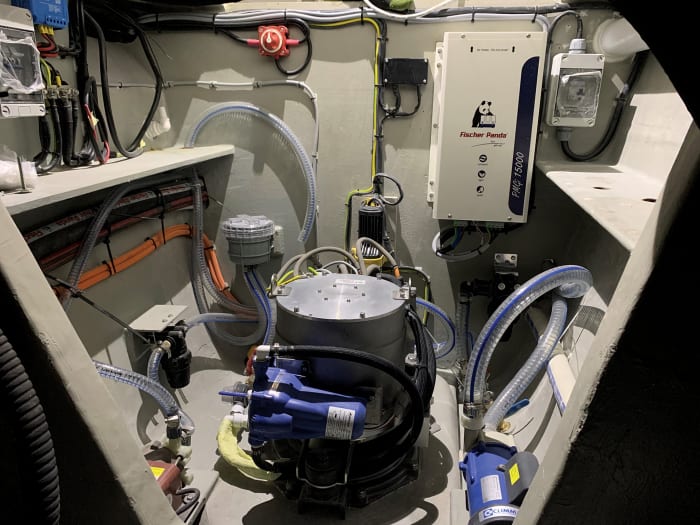 As electric cars become mainstream it’s only natural for sailors and boatbuilders to eye solutions that work the same way on the water. To date, only 2 percent of boats worldwide are powered by electric or hybrid propulsion, but e-mobility is expected to grow by 50 percent over the next two decades, which will likely result in electric-powered boats in the charter market as well.

Today there are multiple players in electrification. Germany’s Torqeedo launched its small electric outboard technology in 2005 and then expanded into high-voltage systems for inboard use. The company’s Deep Blue 25kW and 100kW inboard motor applications have also been combined with saildrives in various power and sailboats. At this year’s Miami boat show, Torqeedo launched a 50kW version, which is paired with a folding propeller and a regeneration feature that produces power when you sail at speeds as low as 6 knots.

Swedish engine manufacturer Volvo Penta is also experimenting with electric motors installed inline between their diesels and IPS pods. As part of this effort, they’ve been working with Fountaine Pajot production catamarans on driving a Lucia 40 sailing cat. Meanwhile, Dutch bow and stern-thruster manufacturer Vetus has developed inboard electric motors for small powerboats, and the Finnish company OceanVolt is now powering a number of J/Boats and Alerion daysailers.

In terms of applications that may have implications for charterers sooner rather than later, Torqeedo has been hard at work with catamarans, boats that present the ideal platform for electric propulsion due to their space, weight and efficient hull shapes. With this in mind, Torqeedo is working on systems for production boats as well as high-performance cats. Last year, for example, the company launched an Excess 15 with twin Deep Blue 50 kW motors and twin 40 kWh BMW i3 batteries (modified by Torqeedo).

Another smaller system was also installed in an Ocean Renegade R5, a Tony Grainger-designed E-glass and carbon-fiber performance cruising cat built in South Africa. With its lightweight construction and carbon mast, the 54ft boat, named Oxygen, is light, with a 31,000lb displacement, so it doesn’t take much to move it.

Seeing the twin Deep Blue motors in the R5’s engine compartments (now called “motor rooms”) gives you an appreciation for how much space is left over when you don’t wedge in a massive diesel. The boat’s propulsion battery is also tucked into a space half under a cockpit settee and half under the galley. This particular R5 has a hybrid system, so there’s a Fischer Panda 15000i generator with a 105-gallon fuel capacity as well. Cruising speed under power is 6 knots with a top end around 10 knots. Expect to cruise 25 miles with electric-only propulsion, perfect for maneuvering in and out of harbors and anchorages. When combined with the genset, the range reaches 600 miles. Since the cat has been clocked sailing 17 knots in 20 knots of wind, you’ll probably not experience much range anxiety.

The house bank aboard the R5 includes twin Torqeedo Power 24-3500 batteries. There’s also a DC-to-DC converter for charging. Speaking of charging, there are no less than four different ways of putting power into the batteries aboard the R5: a 2.4 kWh solar array on the Bimini; the genset; shore power; and hydro regeneration, which can begin creating meaningful amounts of power at 10 knots. There is also air conditioning, two fridges, two freezers, electric winches, B&G electronics and an electric stove aboard Oxygen, so the boat is as power hungry as modern cruisers get. Nonetheless, according to Chris Crane of Tampa Yacht Sales, “You always have power when you need it.”

With respect to cost, Oxygen’s owner estimates the system set him back $135,000 or about $30,000 more than traditional diesel propulsion. However, there’s much less regular maintenance needed with electric propulsion and less fuel consumed, so the overall cost of ownership brings the two options somewhat into parity over time.

As an added benefit, Torqeedo’s electric motors carry a two-year warranty, and the batteries offer an eight-year lifespan from time of install. The current owner is so smitten with the boat he’s already building a new 64ft R6, so the 2020 Oxygen is up for sale with Tampa Yacht Sales. Anyone looking for a technology-driven top performer without the standard year-long waiting list is in luck.

As for the current state of electric power and the charter market, many companies are now experimenting with electric propulsion. Currently, Voyage in the British Virgin Islands is offering a 48-footer bareboat and larger boat crewed. In terms of ease of use, a hybrid system like the one on Oxygen represents a good compromise because the fact there is always a means of charging the batteries via a generator means there is also always plenty of juice. It’s early days, but expect to see more electric or combination diesel/electric options out there soon.