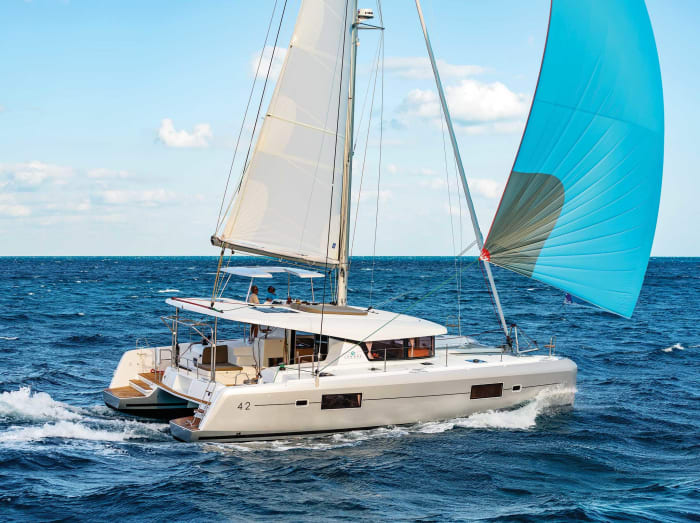 For sailors of a certain age, the entire concept of a mulithull is cutting edge. However, even a cursory glance at a harbor full of cats and tris will show that the “cutting edge” of today looks very different from the cutting edge of, say, the ‘90s, or even the early 2000s—to the point where today’s cats and tris are as different from their predecessors as their predecessors were from the monohulls that came before them.

Where better to start than at the very front of the boat? Two decades ago, in the run-up to The Race, a no-holds-barred, nonstop fully-crewed race around the world, British Vendée Globe hero Pete Goss launched a then radical twin-masted catamaran with “wave piercing” bows. The 120ft Team Phillips, as it was called, ended up falling to pieces during a storm in the mid-Atlantic. However, the boat’s bow concept lived on and can now be found aboard everything from grand prix foiling cats and tris, like those competing in the SailGP, TF35 and GC32 pro circuits, to the latest generations of cruisers. Among the latter, the amount of “piercing” can range from the dramatically fine bows found on the amas of the Neel trimaran line to the “tumblehome” bows found on more conventional cruising cats. Wave-piercing bows are also de rigueur aboard today’s higher-performance cruisers and smaller racing and cruising trimarans with folding amas, like those built by Corsair or in Denmark’s Dragonfly line.

In every case, the goal is to reduce hobby-horsing in chop or a seaway, both by removing weight out of the ends and allowing the bow to better slice its way through the waves (as opposed to lifting over them). Fortunately, since the anchor is deployed amidships aboard a cruising cat, you don’t have to worry about banging the stem when deploying or retrieving the hook. (Neel trimarans employ a combination anchor roller/sprint to help keep you out of trouble: same thing with the new Dragonfly 40.) For what it’s worth wave-piercing, or “tumblehome” bows are also damn sexy looking.

With their split backstays and aggressively swept spreaders obviating the need for a single, fixed centerline backstay, multihulls are a natural fit for square-headed mains. The result has been their appearance aboard everything from America’s Cup racers and bleeding-edge A-class cats to performance-cruisers like those built by Balance, Gunboat and HH Catamarans and out-and-out cruisers. Complementing this trend has been the now essentially ubiquitous use of full-length battens—a feature that was already widely used before the advent of square-top mains to support the larger roaches found aboard multihull mainsails.

Not quite as obvious has been mast placement. To anyone not used to sailing a multihull, the size and weight of a multihull mainsail, in particular, can be daunting, to say the least. The reason for this is that, in addition to their size, multihull mains need to be especially robust in order to stand up to the loads resulting from the fact the boats don’t heel before the force of the wind when things get gusty. This is turn can make for a sail that is a bear to hoist when setting out, never mind reefing.

To help rectify this problem, a few years ago a number of cruising-cat manufacturers, including Bali and Lagoon, decided to start moving their masts aft. The result is a smaller, narrower, high-aspect main complemented by a larger foretriangle area and headsail. Because it’s 1) a lot easier (and less scary!) rolling up a jib as opposed to reefing a main and 2) a LOT easier unrolling a jib as opposed to hauling a mainsail to the top of the mast, this makes for a much more user-friendly rig overall.

Finally, there are sprits. Already being reaching machines, multihulls of all kinds are a natural fit for the panoply of downwind sails available these days, be they Code 0s, asymmetrical spinnakers, screechers or, well, you name it. The advent of continuous-line furlers has only served to make the fit that much better. To make these sails as effective as possible, bowsprits of all kinds are also now found aboard multihulls of all kinds. These can take the form of a simple tubular aluminum sprit secured to the crossmember of a typical cruising cat to massive, oh-so-cool molded “longerons” aboard boats like those in the more performance-oriented HH Catamaran, Gunboat and Balance lines.

Though not quite as obvious as things like wave-piercing bows, bowsprits and square-top mains, one of the most interesting and innovative aspects of multihull design these days can be found in the area of helm stations. Time was a whole lot of helm stations could be found up a short flight of steps to where a bench seat and wheel could be found overlooking the cabintop. But while there’s nothing wrong with this configuration—plenty of new designs continue to employ this kind of elevated helm station, and there are few better perches from which to steer and watch the watery world go by—there are now plenty of other options in the marketplace as well.

Personally, I’m a big fan of dual outboard helm stations because of the way they allow you to sit out near or even on the windward hull when sailing hard on the wind. With this in mind, one of my favorite arrangements is the one found aboard the Seawind line of performance cruisers, in which the helms are mounted on either side of the aft bulkhead of the cabintrunk. The arrangement also makes it possible to duck out of any spray or dirty weather due to the fact the wheels are on the same level as the cockpit sole. HH Catamarans offers a similar arrangement, with the helms elevated a few steps immediately aft of the cabintrunk.

Also fun are the outboard helm stations located all the way aft, like those found aboard the new Excess line of performance cruisers or the outboard tillers that can be specced for just forward of the aft swim steps aboard boats like the Outremer 55. (The latter complements the boats’ twin wheels, also located well outboard.) Then, of course, there’s Balance Catamaran’s propriety Versa-Helm. In this configuration, the entire pedestal can be swung between either a lower or upper position, allowing the person at the helm to con the boat from an elevated position when the weather is good, or from beneath the shelter of the hardtop with things turn snotty.

Finally, there are the forward centerline single helm stations found aboard the boats making up the Gunboat line. Placing the control center of the boat deep within the saloon provides the ultimate in terms of protection from the weather. Locating it directly aft of both the mast and a compact line-handling cockpit forward ensures you remain in direct contact with the boat while sailing at the impressive speeds for which these vessels are renowned. Other builders offering this kind of helm station include HH Catamarans, Kinetic Catamarans and Maine Cat.

Although at first blush, chines and living space may seem like unrelated design elements, they are, in fact, closely related. The reason for this is the way chines on multihulls serve to increase living space by helping flare out a boat’s topsides to create additional interior volume while retaining a relatively narrow hull form below the waterline. Under sail they can also help keep spray down and provide some additional stiffness to the overall structure. As an added benefit, aesthetically they draw the eye fore and aft accentuating the apparent length of the hulls—always a good thing given the somewhat boxy look of many multihulls.

By contrast, the relationship between deck area and lounging space is self-evident—and boy is it evident aboard some of today’s less performance-oriented cruising cats in particular! Elevated lounging areas, forward cockpits complete with cushioned benches and tables, seamless “open” concept designs in which voluminous sliding doors give way to create scads of uninterrupted acreage between the saloon and cockpit—today’s cruising cats provide room for a crowd and then some. Case in point, the recently launched “Catspace” design from France’s Bali Catamarans. Suffice it to say, the name says it all!

On a side note, another way today’s designers and builders are maximizing interior volume is through the use of reverse sheers, an approach that allows them to maximize headroom amidships while keeping weight to a minimum in the ends.

Daggerboards are another feature that is far from new aboard multihulls. However, the blades found aboard today’s boats are most definitely not the same as those found aboard even higher-performing boats in years past. The impetus for all this was, of course, the AC72 catamaran, which managed to take flight during the 34th America’s Cup in 2013 on San Francisco Bay—despite rulemakers’ best efforts to keep it from doing so. While full-foiling multihulls had existed previously, the 34th Cup immediately propelled lifting foils into the mainstream for those production builders looking to provide America’s Cup-like thrills to their adrenaline-addicted customers. Think such boats as the aforementioned GC32, the UK-built White Formula Whisper beach cat, the now full-foiling Olympic-class Nacra 17 and even the diminutive UFO full-foiler, built by Rhode Island’s Fulcrum Speedworks.

Just as interesting have been the inroads lifting foils have made into the performance-cruiser market. In this case, the goal is not so much taking flight as it is reducing wetted surface area underway, improving sail-carrying ability through the increase in righting moment that comes with increased speed, and smoothing out the ride by lifting a boat’s leeward hull partially clear—all the while minimizing leeway when sailing to windward. The result has been a menagerie of curved and/or angled lifting foils, inevitably fabricated out of carbon-fiber to provide the necessary strength while still keeping weight down.

Finally, there are solar panels. With their vast deck and cabintrunk areas, mulithulls are a natural fit for installing solar panels. Hard dodgers aft have proved especially useful locations, since it’s not unusual for them to be free of shadows created by sails, spars or rigging—vexing problems aboard their narrower monohull brethren. Creating a totally carbon-neutral boat remains a challenge, especially for those cruisers who struggle to survive without bringing shore-style mod cons with them offshore. However, in combination with the latest generation of hydrogenerators, like those manufactured by Finland’s Oceanvolt (in which an electric drive leg can also be “reversed” to produce electricity under sail) and France’s Watt&Sea, which makes hydrogenerators expressly calibrated for the higher speeds achieved by cats and tris, truly “green” cruising and passagemaking is only a matter of time.

Best Black Friday Helly Hansen deals – waterproof wear for sailors
Beginners Guide to DMZ – How to Play DMZ for noobs
How To Start Dropshipping in 2023 (FOR BEGINNERS)
Rose from Titanic has nothing on Gee! #titanic #shorts #yacht
Dora the Explorer We’re Sailing to Treasure Island Piano Tutorial