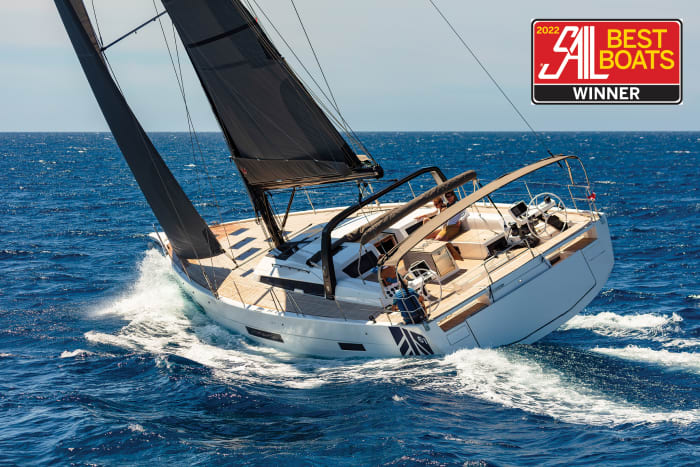 Dufour, long one of France’s most well-respected builders, has been producing sailboats in La Rochelle since the dawn of fiberglass boatbuilding. Having recently merged with another La Rochelle-based builder, Fountaine Pajot, Dufour has now joined other European mass-production yards in producing a large-scale luxury cruising yacht. Its new Dufour 61, winner of SAIL’s 2022 Best Boat Award in the Flagship Monohull category, combines a competitive price point with high-end comfort and some seat-of-the pants performance.

Dufour has been working with Italian designer Umberto Felci since the turn of this century when it bifurcated its models into a Grand Large cruising range and a Performance racing range. Stepping now into the big-boat luxury cruising market, Dufour has again teamed with Felci to create a boat that hews to the contemporary design idiom: lots of beam carried aft with a hard chine to increase initial stability, a low-profile cabinhouse, an open flush foredeck and an efficient T-bulb keel.

The boat’s construction is fairly straightforward. The fiberglass hull laminate is solid below the waterline, with the topsides cored in end-grain balsa. An internal aluminum grid supports the keel, which boasts lead ballast. The infused deck is also cored with balsa. Finish quality is better than average for a mass-production vessel.

The Dufour 61’s cockpit layout is modern in every respect. There are twin wheels aft turning one deep rudder, and I was pleased to see engine controls and a full set of instruments at both helm stations. All lines are led aft under the deck to two pairs of Lewmar 65 winches positioned just in front of each station. The double-ended German mainsheet is controlled via a narrow bridle positioned atop a tall carbon-fiber arch at the forward end of the cockpit.

Behind the helm stations you’ll find a large fold-down transom through which there is access to a modest-size under-cockpit dinghy garage. There’s also space here under a bench seat for an optional outdoor galley unit, featuring a grill and a small sink and tap. Forward of the helms there’s comfortable bench seating for eight and a large centerline cockpit table with folding leaves and a small deck fridge at its aft end.

Moving forward on the wide-sidedecks, you’ll be reassured to find grabrails on the mainsheet arch and coachroof, with solid gunwales of reasonable height outboard. Forward of the mast, in the modern style, the deck is flush and free of handholds.

The Dufour 61 is blessed with an array of layout options featuring what amounts to three different galley treatments. Our test boat had a step-down galley just forward of the saloon to port with what I would call a small passage cabin, with two over-and-under single berths, directly across to starboard. Another layout finds the passage cabin deleted, with the forward galley stretching all the way across the breadth of the boat, a truly glorious space for a serious cook to work in.

In both these forward-galley iterations—besides enjoying lots of storage and counter space, twin sinks near centerline and a huge front-loading fridge/freezer—the cook is bathed in ambient light flowing down from the large windows and deck hatches overhead. The third galley option finds the cook aft to port, just back from the companionway, in a more conventional and cramped location. But this allows space midships for a rather larger passage cabin to port opposite a large head to starboard.

Two of the layouts feature twin aft cabins in the conventional style, and these are pleasant spaces, with lots of headroom and good lighting. The starboard stateroom boasts a full-size double berth; to port there’s a useful pair of single berths, for children or non-conjugal guests. Both staterooms are equipped with en suite heads. The third layout has a truncated aft cabin to port, with just one single berth, behind the aft galley.

The common elements in all three layouts include a spacious saloon just forward of the companionway. This features robust handholds, both at the companionway base and overhead, a detail sadly lacking on many modern boats. To port a large L-shaped settee wraps around a clever folding table that can be raised or lowered to coffee table or dining height. The starboard settee meanwhile has a modular insert that can be moved to centerline to increase seating around the table. At the forward end of this settee you’ll also find a modest nav desk.

Another common element is the palatial owner’s stateroom forward. There is room here for an offset island berth, something I’ve not seen on a monohull before, and a comfortable settee seat. There’s also a good amount of storage space, with a large hanging locker, and, of course, an en suite head.

The third common element is a tiny crew cabin, up in the peak, for the skipper you may need to hire to help run the show.

This is where the Dufour 61 took me by surprise. When I was told my test boat had been set up and rigged for the first time just prior to the Annapolis show, and that in fact no one had ever test-sailed a Dufour 61 before, my expectations were immediately diminished. It’s a common problem in this game—a test boat that isn’t quite ready to go sailing yet—and I wasn’t surprised when I noted the self-tacking blade jib needed more halyard tension only to be told we couldn’t just take up on the halyard due to the modern “half-halyard” rig which makes this is a complicated task. Then there was the in-mast furling mainsail—always convenient, yes, but never optimum in terms of performance.

But damn…the boat sailed really well, in spite of such handicaps. First, it was fast and weatherly. We sailed off Annapolis in 12-15 knots of true breeze and had a great ride. Hitting a 40-degree apparent wind angle, we were soon flying at 8.5 knots. Pinching to 35 degrees we continued doing a respectable 7.8. Even when I squeezed her up inside of 30 degrees, she still didn’t stall out and kept on making a good 5 knots. Off the wind I wished we had an A-sail to fly off our bowsprit. But even with just the little jib upfront we topped 7 knots on a broad reach and clocked over 8 knots with the wind on the beam.

What I liked best was the helm feel, which was well balanced, with just the right amount of friction, and offered excellent feedback and response. The boat’s powerful rudder had good bite, with no tendency I could find to lose its grip. The boat was really fun to sail, with a visceral feel to it, and was easy to handle, like a giant dinghy almost. Set the Dufour 61 up right (you can order a slab-reefed main, an overlapping jib and, of course, downwind sails), and I am sure you will not be disappointed.

The boat turned easily within its own length and was easy to control when backing down, turning promptly in either direction.

Dufour is known for building boats that sail well, and they have lived up to that reputation here. Add in all the luxury features, the living-large accommodation spaces and a competitive price for a boat this size, and the Dufour 61 is a yacht that demands attention.

Base price $1.18 million at time of publication

Black Friday Garmin Watch Deals: Our pick of the best bargains
HOW TO START DROPSHIPPING WITH $0 IN 2023 (Beginners Guide)
EU4 1.34 Mughals Guide – The BEST NATION For A WORLD CONQUEST
F1 Cribs. Daniel Ricciardo’s Motorhome for Europe
I was Dared to POLAR PLUNGE whilst Sailing.. ( Part 4/5 )