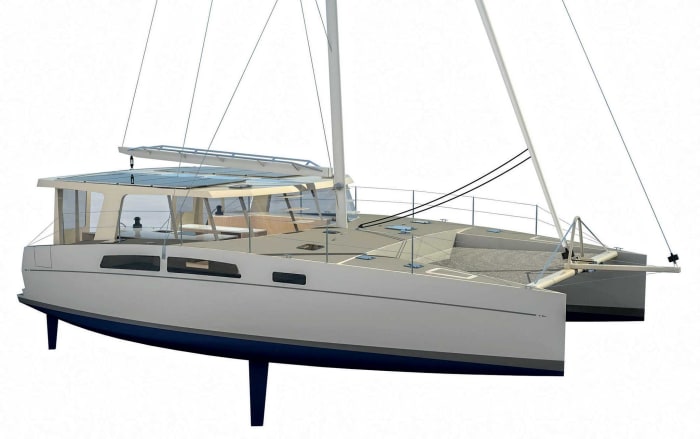 Anacortes, Washington, is an unassuming sea-salty town near the San Juan Islands of Puget Sound, and the Betts Boats yard is easy for a passerby to miss. But within Betts’ facilities, the dawn of an era in Pacific Northwest production boatbuilding could be breaking with the construction of Hull #1 of the new performance-cruiser Whitacre 47. In true Cascadian fashion, it’ll be locally grown with a sustainable ethos, both environmentally and economically, for rugged off-grid all-weather living. Combined with a high degree of customization and ideal market conditions, the Whitacre 47 is positioned to make quite a splash.

The seeds that sprouted into the Whitacre 47 were first sown when Mike Mullenberg, a yacht broker with his own Anacortes-based brokerage Pacific Cruising Yachts (PCY), sold retired U.S. Navy fighter pilot, aerospace engineer and avid sailor TC Skeels a Dragonfly 1000. After cruising extensively with his wife for over six years, it was time to go bigger.

“TC and I started looking for boats after I sold him his Dragonfly,” Mullenberg told me in the PCY office a few miles from Betts Boats. Mullenberg started working in the sailing industry in 1975 and has made a career selling sailboats. “I’ve sold just about everything,” he joked, rattling off mainstream brands. But he didn’t have the right boat for Skeels’ next purchase—not yet.

Skeels’ dream catamaran would maintain nimble performance sailing under full liveaboard loads year-round in the Pacific Northwest with minimal marina stops. But the global markets and supply chain woes of the pandemic era forced them to pivot.

“We priced out a Bali, and it came out to $750,000 to $800,000, and out of that, around $75,000 was freight,” explained Mullenberg. “TC wasn’t going to have it. He’d rather put that 75 grand into the boat. That’s when we started talking about custom design.” Mullenberg has 10 years of experience with custom home builds, so he guided Skeels along the process. The first step was to seek the right designer with multihull experience. Turns out, Skeels knew just the guy—Hal Whitacre.

Whitacre studied naval architecture and marine engineering at the University of Michigan before working for the naval architecture company Gibbs & Cox in Washington, DC. He then launched Whitacre Yacht Design with a MORC racing sailboat design and the Delta one-design racing dinghy. Whitacre’s career has produced many notable multihull projects, and he has an ongoing partnership with the designs-for-sale and home-kit titan Bruce Roberts. Together the two have dreamed up over 100 boats, in both design and kit forms.

Whitacre’s name likely rings a bell with multihull afficionados thanks to his association with performance catamaran builder Gunboat. After the initial tumultuous launchings of the company, Whitacre joined mid-project. “I was brought on as the chief naval architect in 2014, which involved engineering and design oversight of the Gunboat 55 production line,” said Whitacre. He was involved with other Gunboat builds until the U.S. facility in North Carolina closed in 2015, after which he continued working on Gunboat related projects with private clients. He is also the chief naval architect for Stiletto Catamarans and Daedalus Yachts.

When it came to Skeels’ brief, the key design consideration for Whitacre was the age-old weight versus performance challenge. Many catamarans are touted as high-performance when unloaded, but that same performance is sacrificed under the real-world load of a liveaboard couple or family. Whitacre reverse engineered the hull shapes to make them capable of carrying a full load—from foulies to furniture (real landlubber furniture one can rearrange, as per Skeels’ request)—while maintaining good speed.

“They developed until they got enough scantlings to find a builder,” said Mullenberg. At the point Mullenberg introduced Skeels to the relative handful of local Pacific Northwest boatbuilders up to the task. Eventually, he and Skeels met with James Betts. The rest is history.

Mullenberg and I paid a visit to Betts Boats to meet up with Skeels, who spends most days at the yard. In greeting, Skeels—over six-foot tall with silver mustache—leapt from the foredeck onto what will someday be the saloon floor with an enthusiastic thud, a show of confidence in the construction. In addition to his globe-trotting U.S. Navy fighter pilot career, Skeels flew a F14 Tomcat for the movie Top Gun.

“This [Hull #1] is designed to be a liveaboard for a couple,” explained Skeels. “It’s maximizing the living space and comfort.” The hull is primarily fiberglass and fully cored using a high-ductility SAN type foam. Carbon fiber is employed in key points where extra strength and stiffness is beneficial, including the wet deck transverse frames, mast bulkhead and aft garage-door style swim platform.

“A lot of those traditional fiberglass methods are really good,” Whitacre later told me, explaining why he broke from the “carbon fiber is everything” craze of the 2010s.

As Skeels showed me around, one of the designs that struck me was the helm layout: twin helms set aft and inside the cabin. “You see a lot of boats where the skipper is isolated somewhere outside,” Skeels said disapprovingly. But that clearly won’t be a problem aboard the Whitacre 47. Not only that but the cabin windows on Whitacre’s design are configured to provide basically 360-degree visibility from either helm. A row of skylights is also built into the cabintop, so the skipper should be able to read telltales, even tucked in out of the weather. In an especially neat design twist, the boat’s halyards and reefing lines are tended forward at the mast, another idea Whitacre came up with based on experience.

“In past builds I’ve worked on, there’d be this giant central island with all the winches in one spot,” said Whitacre. But while this kind of arrangement was meant to make things easier for the operator, Whitacre was not a fan. “It was a mess,” he continued, citing weight, aesthetics and practicality concerns, including the fact center console models often provide poor sail visibility, thanks to the position of the boom and the sight angle from the wheel. “Moving the helms back was a conscious design choice for the 47,” Whitacre also told me.

Beyond that, the layout for the Whitacre 47 is highly custom with a varying number of berths and heads in the two hulls. Most of the aft cabin section is part of a novel garage door-style swim platform. The dinghy and its attendant davits will also live back here.

Notable is Skeels’s idea of putting an all-electric inboard engine in one ama and a traditional diesel inboard in the other. According to Skeels, the combination provides the diesel’s benefits of reliability, range and raw power in a pinch with the electric engine’s fuel savings potential and quiet operation. Naturally, the boat is equipped with a large solar array (estimated at nearly 3,200 watts) atop the cabintop, which will trickle charge the battery bank (estimated 20,000 to 40,000 watt capacity).

Below the waterline, the Whitacre 47 features a contemporary but fairly standard twin rudder and centerboard design. The plumb bows are fine with a gentle parabolic shape that should give the boat dynamic lift in a swell to prevent plunging. The aft portion straightens to keep trim minimal for better performance. A slight chine aims to prevent water from running up the sides at high speeds and add buoyancy aft.

The sailplan includes an aluminum mast and boom with stainless steel compact strand wire as standing rigging. Lower shrouds will be Dyneema or Aramid. Owners will be able to choose between a pin-headed or square-headed full battened configuration. Foresails range among self-tending non-overlapping jib, solent or flying sails that can benefit from the bowsprit.

Hull #1 is focused on its life’s mission: all-season liveaboard performance cruising in the Pacific Northwest that’s market-competitive with other sailing catamarans of its class. Zoom out, and larger themes reveal themselves with the Whitacre 47 project.

“Charter growth has been solid uphill for the last decade and that drives introduction and awareness to consumers when they go to the Caribbean, charter a cat and go, ‘oh this is cool,’” Mullenberg said. While multihull demand is rising, the major production catamaran players are overseas in places like France, South Africa and South East Asia. The demand coupled with robust older generation wealth as the pandemic era pushes some to early retirement could be a good sign for American boat builders.

“It’s demographics and economics. I truly believe that we stumbled into it. We’re probably at the pinnacle of opportunity for bringing a new cat on the market, particularly if it’s US-built,” said Mullenberg. From his perspective, both the economics related to the global supply chain issues and the socio-political influences of Americans wanting domestic built boats make it a sales perfect storm.

Mullenberg’s observations align with empirical trends in manufacturing. According to the 2021 State of North America Manufacturing Report, which utilizes aggregated data from 1.6 million monthly industrial U.S. buyers, 83 percent of manufacturers indicated they are “likely” or “extremely likely” to reshore in 2021 (up 54 percent since March 2020). The report posits that if four in five U.S. manufacturers follow through and bring on a single new domestic single-contract supplier each, it could inject $443 billion into the economy. The Whitacre 47 project has already directly created tradesperson jobs at Betts Boats, helping the Anacortes community.

A key to Betts Boats’ success is to be ahead of the curve with regards to the strict environmental practices of California—where James Betts once operated—and now Washington. Both California and Washington are infamous in the boatbuilding industry for having strict environmental regulations, notably on volatile organic compound (VOC) emissions. However, while some boatbuilders fled to locales with lower environmental standards to cut costs, Betts evolved to make it work. For example, Betts builds with epoxies instead of the styrene producing standard polyester resins. (If you have ever lamented urban smog, industrial-released styrene emissions are a common culprit.)

“The only off-gassing you’ll smell there [Betts Boats] is maybe if they are shooting urethane paint or something,” admired Mullenberg. Betts also likes to buy U.S. products because of the Jones Act, a longstanding maritime manufacturing law in the United States that mandates vessels used for commercial purposes in U.S. waters be built in the United States with U.S. materials. Betts builds many boats for commercial life, notably tourism catamarans bound for Hawaii. As a result, from a practical standpoint, it makes sense to buy American to be in Jones Act compliance as a baseline.

When viewed in this light, Whitacre 47’s success potentially means more than the already exciting launch of a new competitive production sailing catamaran. We may be witnessing the first signs of a wider manufacturing “re-homing” trend that also means American jobs, Jones Act compliance and buying local. This could also be the start of an emphasis on environmental consciousness being a key market competitive factor: Washington state green standards, off-grid sustainability emphasis, electric engine and all.

“We’re all anxious,” said Mullenberg. “We want to get this boat on the water.” At the time of this writing, the composite construction was nearly finished and installation mode had begun. Whitacre Catamarans anticipated a finished boat by June or July 2022. “The boat is getting done how TC wants it, and it’s getting done properly, no shortcuts.” According to Mullenberg, about a dozen serious potential buyers are waiting on the sidelines, keen to see Hull #1 splash. If the Whitacre 47 delivers as anticipated this summer, those potentials won’t be on the sidelines for long.