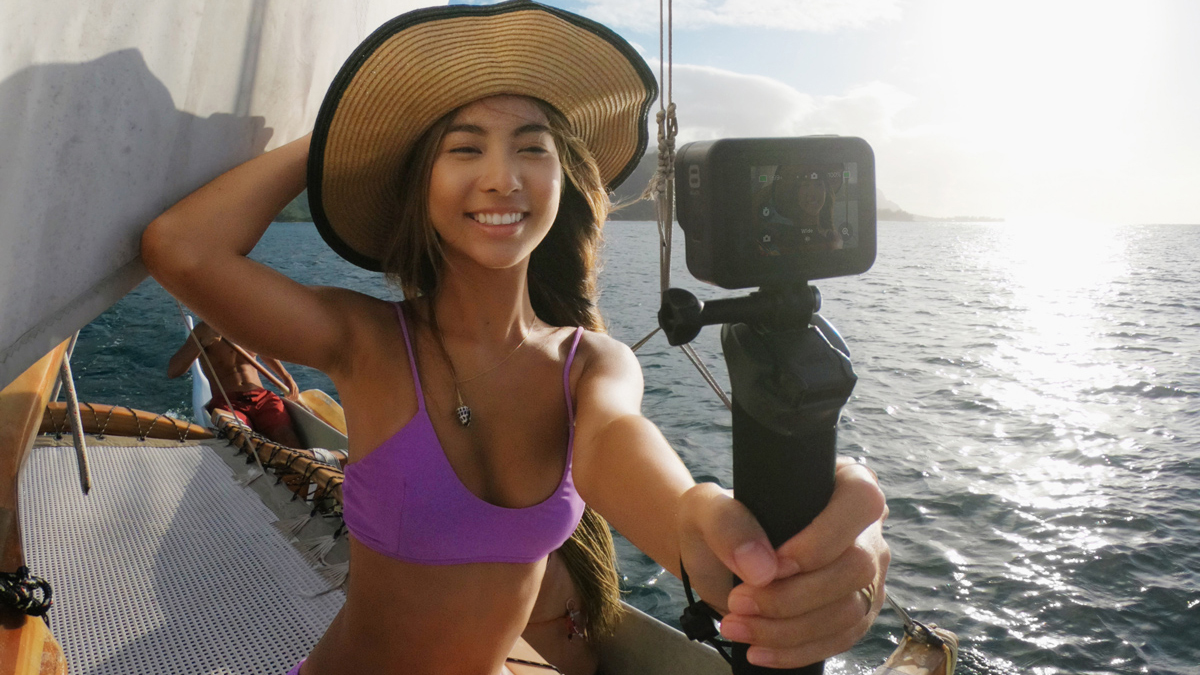 Action cameras, adventure cameras, body cams or head cams; call them what you will – we take a look at the best ‘GoPro’ style cameras (named after the company largely responsible for making this type of device popular in action sports) for boating and watersports 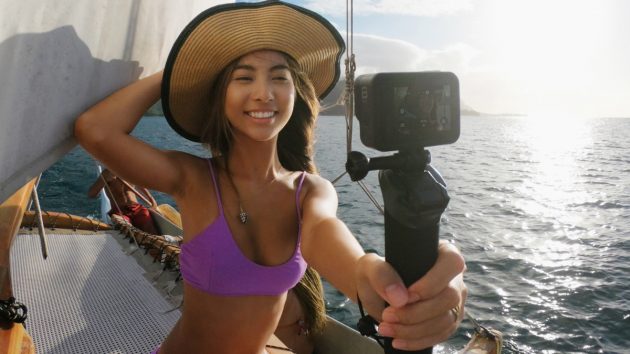 GoPro’s meteoric rise to success was powered by the fact that it let users capture stunning point-of-view action sequences, the likes of which had previously been limited to professional sports filming.

Unsurprisingly, the brand spawned not only a generation of imitators but also a tranche of alternatives. Today, action cameras inhabit a crowded marketplace, which is generally good news for consumers – there’s plenty of choice, prices are affordable and what can be achieved in terms of results is nothing short of breathtaking. 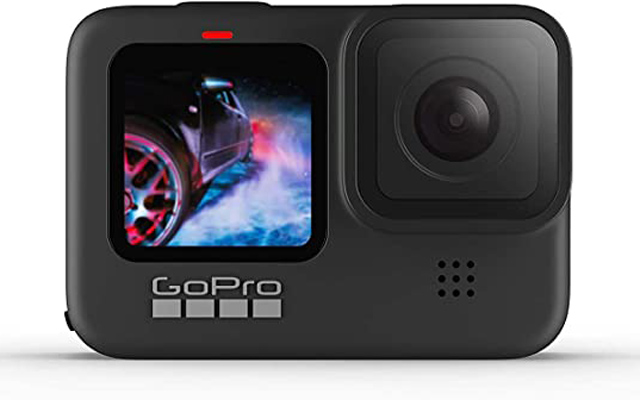 The definitive gopro for boating

Widely recognised by many as the gold standard of action cameras, GoPro has been setting the bar since its launch in 2004. The GoPro HERO 9 Black featured here offers the highest video resolution – 5K ultra HD – of any camera in our review. The camera comes equipped with a touch rear screen and a front LCD screen.

In addition to video recording and capturing 20 mega pixel still photos, the HERO 9 Black is capable of live streaming. At 2.27″, the touch rear screen is larger than most, which should make hitting the controls that little bit easier, and the integral flip out ‘folding fingers’ means that a separate mounting frame is no longer required – simply attach the camera to any mount and away you go. This is undoubtedly a premium, high-spec offer, but to get the most from it mounting accessories will need to be purchased too. 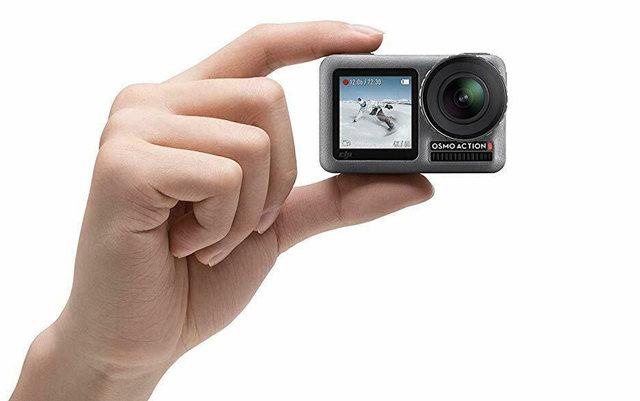 With products such as its Pocket camera today being the weapon of choice of myriad vloggers the world over, DJI Osmo has established itself as a prime contender in the gyro-stabilised camera field. Its action camera comes complete with a dedicated charging kit, which includes the Osmo Action Charging Hub and two spare batteries and cases.

Unlike many other action cameras we’ve seen, the DJI Osmo Action is only waterproof to 10 metres. But what it does have in common with many other higher-end action cams is two screens – a touch screen on the back and a front screen that is great for selfies. To ensure its movies have that larger-than-life look, the DJI Osmo Action shoots in 4K High Dynamic Range (HDR) format. 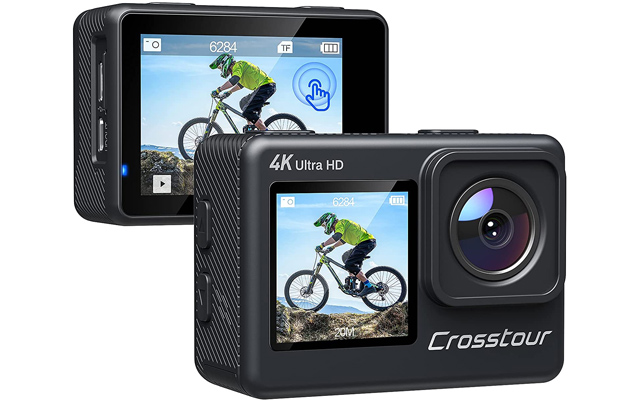 The Crosstour CT9300 action cam is an Amazon Choice product. Priced in the mid-range bracket, it’s waterproof and offers a number of cool features; time lapse, anti-shake, loop recording and built-in lens distortion correction to iron out the fisheye effect of the super wide angle lens, to name but a few.

Video is 4K ultra high definition and still images weigh in at a hefty 24 mega pixels. Up to 90 minutes is promised on a single battery charge and connectivity is by way of WiFi and USB. The camera is bundled with an upgraded accessories kit to add further appeal to the offer. 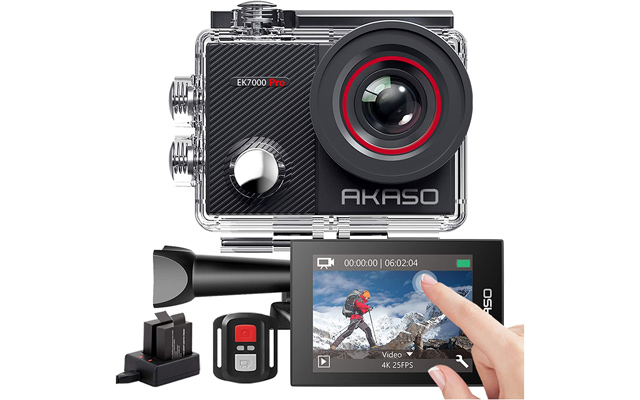 As another Amazon Choice action camera, the AKASO EK7000 Pro has a huge spec and promises to deliver ultra high definition 4K videos and outstanding 16 mega pixel still images. Equipped with a 2-inch screen/user interface and a lens featuring narrow, medium, wide or super wide view angles, the EK70000 is waterproof to 40 metres, which should be plenty deep enough for most users.

There’s a neat wrist controller for taking videos and stills, and onboard connectivity includes WiFi and an HDMI interface. The camera links up to an app for editing, sharing, operation or review via a smartphone or tablet. This looks to be a great buy for the money, but purchasers are likely to also want to add the AKASO accessories kit, which adds £15.99 to the price. 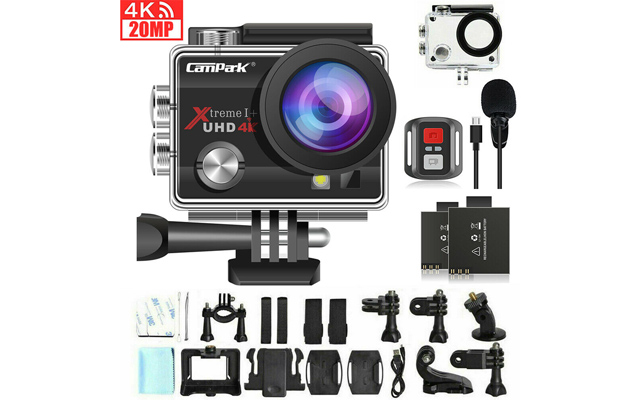 If a fully functioning, ultra high definition 4K, waterproof sports camera for under £35 sounds too good to be true, it may well be. But that’s what’s on offer on eBay, with multiple sellers promoting not just the Campark or similar cameras but also a full kit of accessories to go with it.

What’s more, postage is free and according to the listing we’ve chosen, stock is held in the UK.

Included in the Campark’s lengthy list of features is built-in WiFi, image stabilisation, infrared control and much more. In addition to three video modes, images of up to 20 mega pixels in size can be recorded.

Providing the quality is as claimed, and it keeps working, how far wrong can you go at this price? 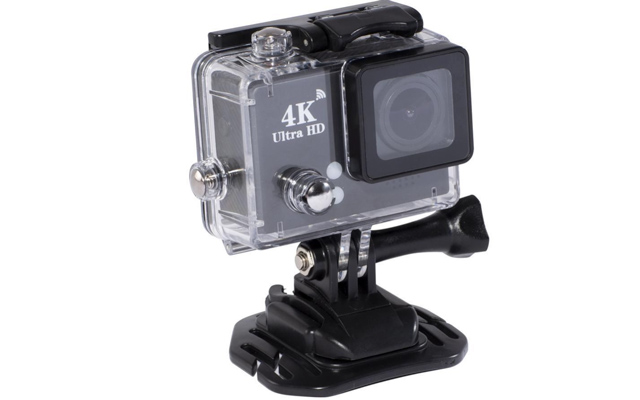 Daewoo is one of those South Korean mega-companies that make just about everything – from cars and buses to textiles and electronics, they do the lot.

Being able to manufacture and ship an action cam halfway around the world at a price which allows a respected retailer such Currys to retail it for under £30 speaks volumes about Daewoo’s commercial muscle.

And with 4K ultra high definition 3840 x 1080P video, a wide angle 170-degree lens and built-in WiFi, the spec of its action cam is pretty impressive too. Waterproof to 30 metres with its included housing, the camera doubles up as a webcam when not in use elsewhere.

Buy it now with Currys 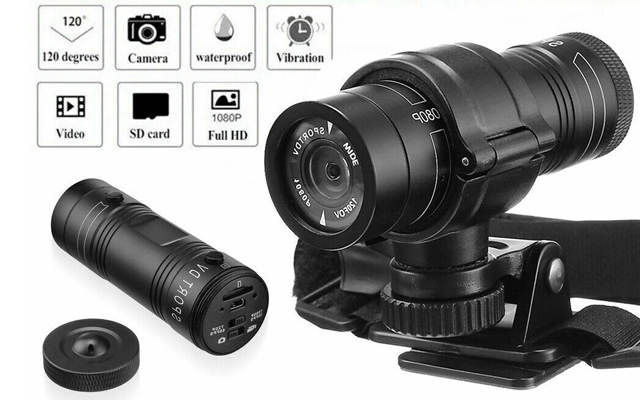 Another product from the bargain basement is this sports action camera, which is actually billed as a motorcycle helmet cam. But given it’s waterproof and vibration resistant too, there’s nothing to say it can’t be used to good effect by sailors and motor boaters as well.

Its bag of accessories includes a rail mount, presumably intended for handlebars but which may also come in handy for attaching to boat rails. Made of aluminium alloy and with a year-long warrantee, this unbranded offer represents an ultra-low cost entry into the action cam arena.

No matter which type of action camera you opt for, there are a number of key features to consider before you buy a gopro for boating.

Build quality: Any action camera needs to be rugged, tough and durable as they’re going to be taken to places ordinary cameras fear to tread. From under (salt)water to strapped to the mast in a gale, a GoPro for boating needs to be able take whatever you and the environment decide to throw at it.

Video quality: In terms of image quality, the options include HD, 4K and 6K. Then there’s the output format; MP4, HEVC and so on, so think about the quality you want to achieve and how you want to view it.

Sound quality: Consider sound as well. If audio quality is important to your videos, then a camera with an external microphone socket is a must. Do your homework so you can make an informed choice when it comes to deciding which GoPro to buy for your boating adventure.

Size: As elsewhere in life, size matters when it comes to action cameras. Small and fiddly or larger but easier to operate sum up the options here, but think about where you’re going to mount it – or if it will be worn on the body.

Battery life: A vital consideration. The batteries on early action cameras had extremely limited power storage, meaning you had to carry a bagful of them for a full day’s shooting. Things are far better today, but battery life is still worth checking.

Accessories: Body mounts, helmet mounts, remote controllers, waterproof casings; the list goes on. And on and on. To avoid disappointment, shortlist the cameras you like and compare their accessories before buying.

Making the Most of TRANSFERS in FM21 | Guide to Selling Players in Football Manager 2021
America’s Cup: Alinghi Red Bull Racing launch their AC75
Selling Cross-Border via Tmall Global, JD & WeChat: A Video Tutorial
How to Sail – How to tack (turn around) a two person sailboat
New wallywind range proves luxury and speed do mix