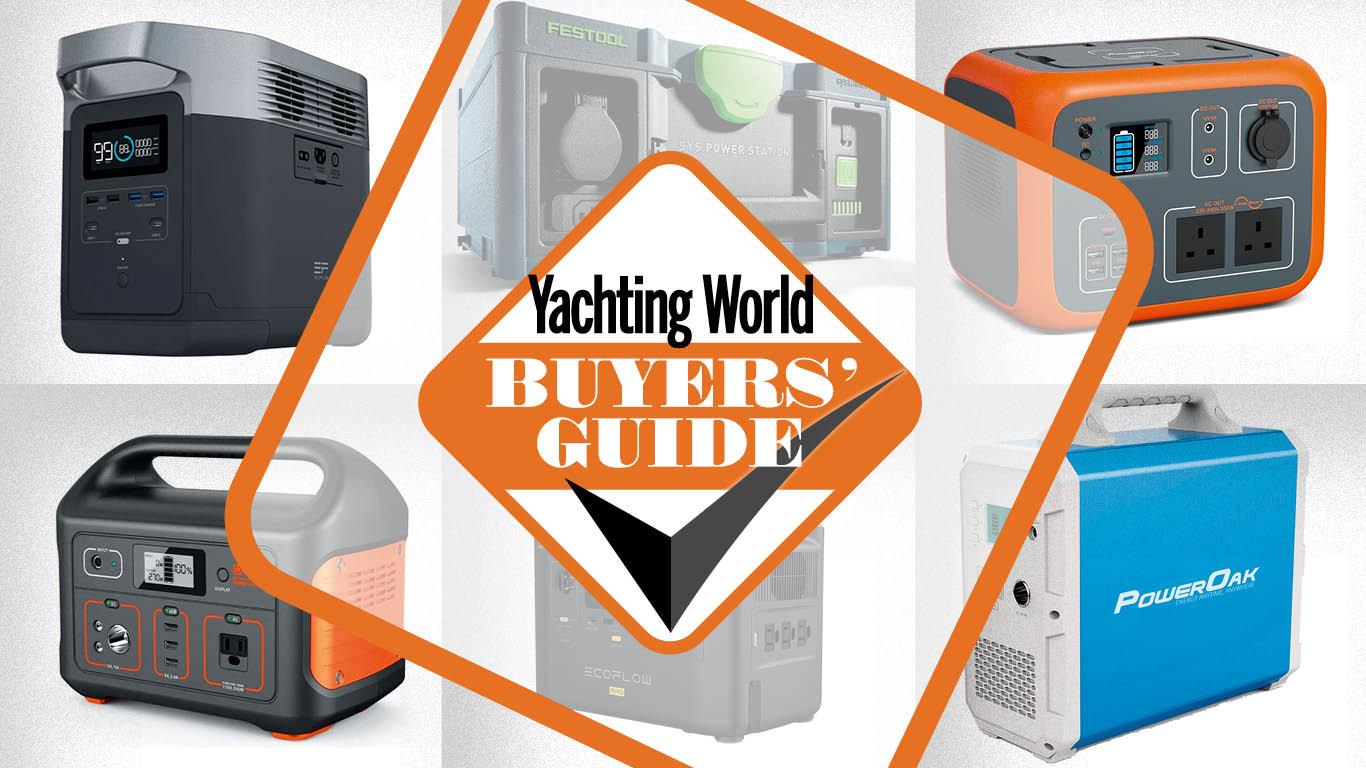 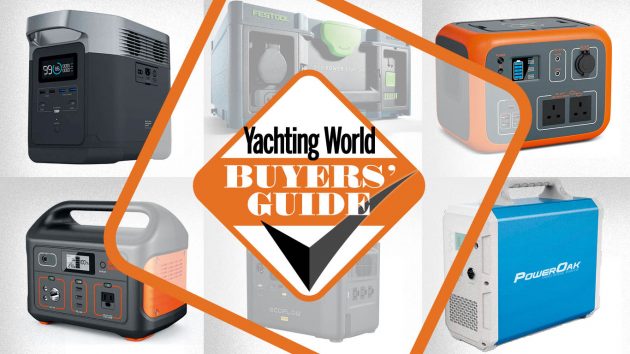 When Joni Mitchell sang ‘You don’t know what you’ve got till it’s gone’ in her iconic song Big Yellow Taxi, she could have been singing about shore power. For as every yacht owner without an onboard generator discovers, the 240V AC mains supply we take for granted ashore becomes a distant dream whenever you leave the marina. Without mains power to recharge laptops and run kettles, microwaves and the like, life becomes more restricted.

While some might view 240V at sea as something of a luxury – after all, plenty of us have got by without it up until now – anyone who has spent an extended time on the water, especially at anchor without the engines running, will know that DC battery power is very much a finite resource. Cabin and cockpit lights, fridges and fans, or firing up the heater for a chilly night onboard, all take a battery-draining toll.

While a fully plumbed-in auxiliary generator provides the solution for larger yachts, the same does not hold true for smaller craft where engine room space and finances are often at a premium. Here, owners seeking mains power have traditionally either carried a portable genset – usually a low powered, noisy, smelly petrol-fuelled unit – or have simply gone without.

But now there’s another way: the portable electric power station. These rechargeable lithium-ion battery packs with built-in 240V inverters are small enough to tuck away under a seat or in a locker but many of them are also powerful enough to run energy intensive items like electric kettles. They are much less cumbersome than a traditional genny as well as being silent and emission free – ideal for occasional overnights at anchor or weekending aboard. In the same way that electric outboards are nibbling away at the market share of petrol-powered ones, portable electric power stations are now creeping quietly into the boating world.

The capabilities of these upstart interlopers vary widely but, as a general guide, the more you pay, the more portable power you get to take away. 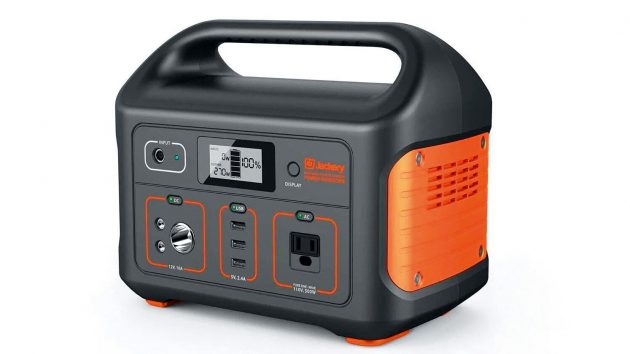 Jackery’s Explorer 500 Power Station is a 518Wh unit with three 12V DC outputs, three USB sockets and a UK three-pin 240V plug socket. The AC power output is 500W continuous and 1,000W peak. Jackery describes its Explorer 500 as a versatile green solar generator. That’s because when used in conjunction with the firm’s SolarSaga 100W solar panel, the unit’s lithium-ion battery pack can be fully recharged in around 9.5 hours. In 2016 Jackery won a prestigious Red Dot award for the design of its products. One notable feature on the Explorer 500 is the large LCD display showing the input/output power at any given time together with the battery charge status. 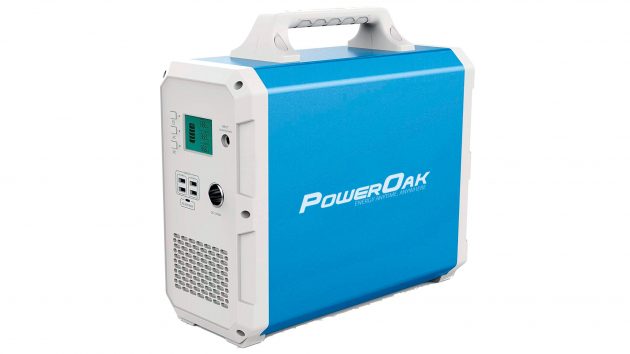 The 1,500Wh of power stored by the PowerOak PS8 EB150 means it is capable of running a 1kW travel kettle (or any other 1kW appliance) for 90 minutes non-stop – which of course nobody does. Estimating the time taken to boil a typical two-cup travel kettle as two minutes suggests this stylish power station would serve up to 90 brews on a single charge. The unit delivers its power via one of the two UK three-pin 240V AC sockets on the back of the box. In addition, the unit has five USB ports, including one USB-C outlet. An LCD display shows charging power, AC and DC output power, AC and DC on/off status, and a battery status indicator. 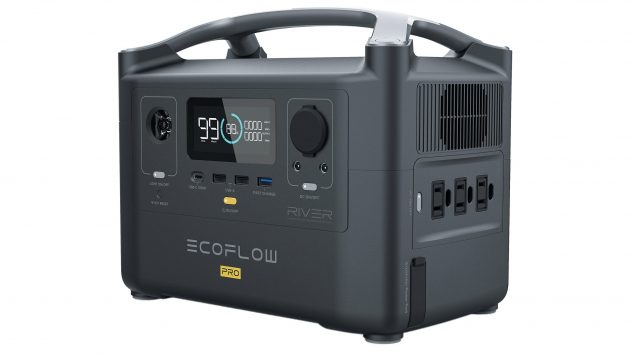 While the EcoFlow River PRO is supplied as a 720Wh unit with a 600W output capability, it has a neat trick up its sleeve – a second battery can be added to double the energy storage capacity to 1,440Wh. And if you need more output power, that’s not a problem either as the unit features what EcoFlow calls its X-boost mode.

This allows the River PRO to power devices up to 1,800W, which covers around 80% of kitchen appliances and DIY tools. Solar panel recharging times of as little as four hours are possible by using two EF 11W solar panels (sold separately), while the unit can be recharged from the mains from zero to 80% in just one hour, with a full charge achieved in 1.6 hours. 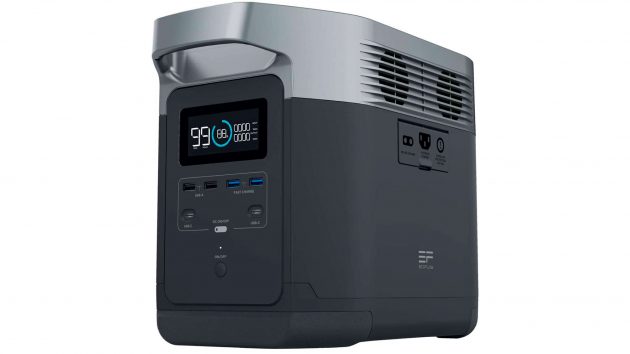 Packing a 1,260Wh punch, the EcoFlow Delta is a fully-featured portable power station with four three-pin 240V AC 1,800W (3,300W surge) sockets, six USB outlets (two USB-A, two fast charge and two USB-C) and a 13.6V car cigarette lighter-style socket. That means it is theoretically possible to run up to 11 appliances at once, although the power would quickly drain at that rate. The EcoFlow Delta can run a mains appliance such as a microwave for 1 to 1.8 hours or a TV for up to 16 hours. It will also power a coffee machine long enough to deliver between 50 and 60 cups. An additional bonus offered by the EcoFlow Delta is its solar panel/car cigarette lighter input which allows the unit to be recharged either by solar or car battery power. 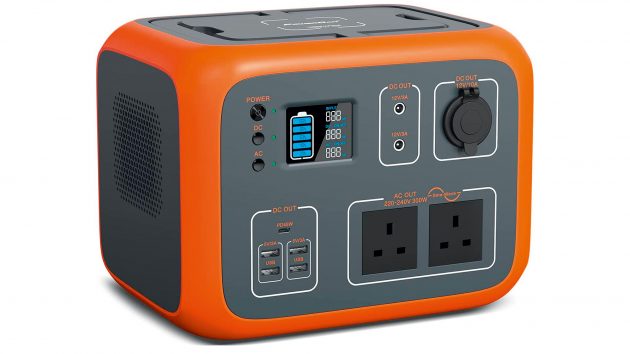 This compact 500Wh Bluetti PS6S portable power station features two 240V outlets providing up to 300W of AC power, which makes it capable of running products such as a mini-fridge. There are five USB points, including a USB-C socket, two 12V 3A sockets and a 12V 9A cigarette lighter outlet. Poweroak says the onboard lithium-ion battery cell is good for more than 1,000 cycles, and an in-built multi-protection system guards against over-voltage, over-current, over-temperature and short circuit. Recharging takes 6 to 6.5 hours using the included AC adaptor/generator, or 6 to 7 hours using Poweroak’s SP120 120W solar panel (sold separately). Includes a 24-month warranty. 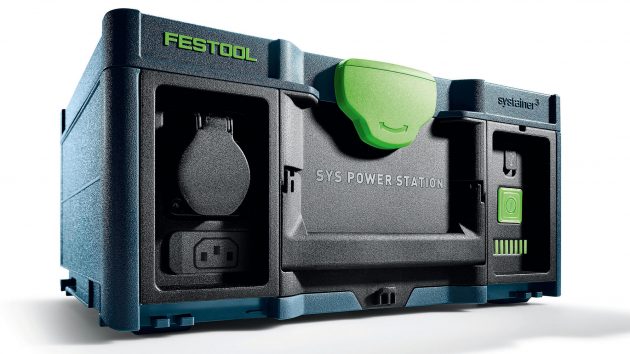 The big daddy of our pick of portable power stations, the Festool SYS-PST 1500 delivers a mighty 2,990W of permanent power and up to 11,000W in a short-term burst. Despite this hefty performance the unit is not too heavy or large; it weighs 16.5kg and measures 396 x 296 x 187mm. A full recharge takes three hours, with a built-in smart charging system protecting the battery cells while charging is under way. In addition to a single 240V UK three-pin outlet, the unit also provides 5-20V via a USB-C connection. Designed primarily for the construction industry, the SYS-PST 1500’s lithium-ion battery stores 1,500Wh of energy. This, Festool claims, is sufficient to run all the tools a builder typically uses for an entire working day – and as the average skipper is likely to demand much less power than a tradesman, it should run for considerably longer on a boat.

Buy it now at Festool