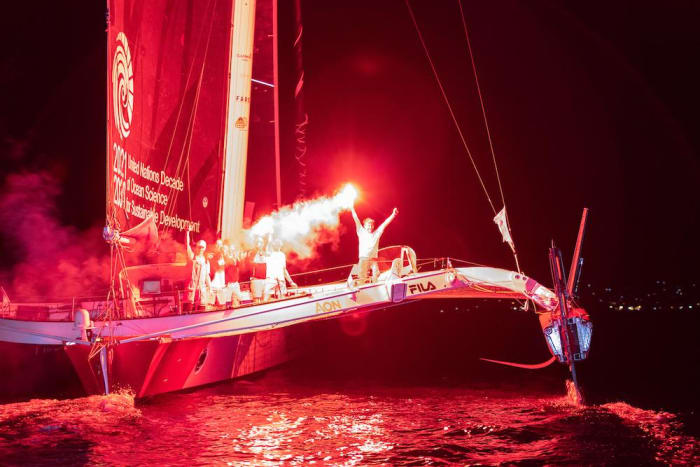 Over the weekend, the first finishers of the 2022 RORC Transat made landfall in Grenada, led by Giovanni Soldini’s Multi70 Maserati, which was awarded line honors with a corrected time of six days, 18 hours and 51 minutes. Maserati finished ahead of Peter Cunningham’s MOD70 PowerPlay and Jason Carroll’s MOD70 Argo by less than 20 miles.

“That was really fantastic,” said Soldini after the finish. “To do a transatlantic race like that with three boat 20 miles from each other is just amazing. We had a big problem the first night as straight away we broke the port rudder (hitting a UFO). However, in the second part of the race, luckily the angle was such that the starboard rudder was in the water.”

The next day, the famed 100ft VPLP Design/Verdier Maxi Comanche was awarded line honors for monohulls and secured the IMA Trophy. Comanche has set a new race record of seven days, 22 hours and one minute, beating the previous monohull record by over two days. Their speed run is not a huge surprise given that Comanche is in the habit of squashing records, and it already holds the title for the Monohull West-East Transatlantic record, as well as race records and line honors for the Rolex Fastnet Race, the RORC Caribbean 600, the Rolex Sydney Hobart, the Transpac and the Rolex Middle Sea Race. It’s still possible, however, that another monohull in the fleet could take the overall victory with a corrected IRC time.

“Comanche is an absolute weapon in the open ocean,” said skipper Mitch Booth. “The team are just so privileged to have the opportunity to race this boat with the full support and trust from the owners. It’s just a real thrill to be on board” The crew is a mix of offshore sailors, grand prix inshore sailors and a few newcomers. “We are not in set roles,” Booth says. “Everyone is trimming and on the helm. We are mixing it up, having a great time. It’s been really fun sailing together. Setting Atlantic records is iconic and very special.”

At press time, Ultim Emotion 2 and L4 Trifork were the only other boat to have finished, securing fifth and sixth overall respectively. At the back of the pack, the American-flagged Gunboat 68, Tosca is back on the course after several days of repairs in the Azores.

To follow the rest of the fleet as they finish, visit the race tracker here.