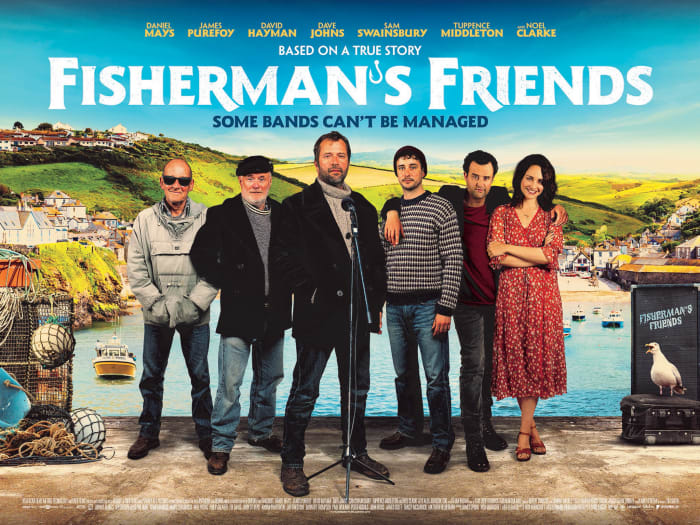 Along with other timeless pursuits, like baking sourdough and gardening, singing sea shanties surged back into popularity during the recent lockdown, thanks, in part, to the app TikTok and its “duet” feature, which allows singers from around the world create music together.

By the time late-night host Stephen Colbert tweeted it was the “Year of the Sea Shanty”—with a video featuring the unlikely duo of an American gamer and a British rock and roller singing Roll Me Bully Boys in haunting harmony—the trend had hit the mainstream. Almost overnight, thousands of young people had a version of The Wellerman by Scottish singer Nathan Evans stuck in their heads. The original video has been “liked” 2.4 million times since its debut in late 2020.

But sea shanties are more than just a cultural trend for young people during a pandemic. The film Fisherman’s Friends, which was released in the UK pre-Covid, and has since enjoyed broad appeal, with a Netflix release and a sequel in the works, describes the fictionalized rise of the real-life Cornwall shanty group by the same name. The film is sweet, at times poignant and richly scored with the group’s enchanting music. The shanty group has turned out to be such a phenomenon that this October a musical about them, creatively titled The Fisherman’s Friends Musical, made its debut as well.

As shanties have enjoyed their ongoing surge in popularity, many have been asking what exactly makes a sea shanty. The term “sea shanty” is often used to describe any kind of folk music about sailing and whaling. However, technically, shanties are only those songs whose rhythms were once used to synchronize a crew when hauling lines aboard large sailing ships. With this in mind, shanties can be further divided into three categories based on the purpose of the song. “Short-haul” shanties, for example, are short, simple songs for lines that only needed a few pulls. An example would be Haul Away Joe. “Halyard” shanties are for longer lines and have distinctive “pull and relax” rhythms, like those found in The Black Ball Line or The Drunken Sailor. Finally, “capstan,” or “pumping,” shanties were used for synchronizing the crew’s footsteps when, say, weighing anchor. This allowed for longer songs, resulting in some of the most recognizable tunes, like Cape Cod Girls and Leave Her, Johnny.

In many ways, it makes perfect sense that sea shanties should be in vogue this year. Shanties often include mournful themes, like missing loved ones or just passing the time until a better day. They’re powerful yet easy to join, a sort of mass musical communion—exactly the kind of songs that would have appeal during a time of loss and loneliness.

For those just getting into the genre, the following is a selection of artists with a variety of sounds and approaches to their shanties. Whether you like more traditional tunes or something with a bit of a kick, there’s a shanty group out there for you.

Though most of his songs were not sea shanties in the technical sense, if you’re in the mood for somber folktales of calamities on the high seas (or Great Lakes), Stan Rogers is for you. This Canadian singer died tragically young in 1983, but his rumbling baritone and melancholy stories continue to move listeners to this day. When exploring his discography, be sure to check out Northwest Passage, Barret’s Privateers and The Mary Ellen Carter.

This group has been performing together for over 25 years, and has both the sound and chemistry to prove it. As a group of working fishermen from the rural Cornish town of Port Isaac, Fisherman’s Friends is one of the most authentic performers of shanties as work songs. Some of my personal favorite tracks include Pay Me My Money Down, No Hopers, Jokers & Rogues and Keep Hauling.

The Longest Johns were a big winner in last year’s shanty boom. The group invited fans to submit videos of themselves singing Leave Her Johnny and compiled a digital “Mass Choir” of the nearly 500 submissions. To date, it has received over five and a half million views on YouTube (search “Leave Her Johnny The Longest Johns”). When not conducting a massive e-choir, the group has completed six albums of sea songs in its gentle, lilting style. Bones in the Ocean and The Cruel Wars are among their best.

If you want something a little more spirited, try the Vancouver-based folk-punk group The Dreadnoughts. Drawing inspiration from the likes of the Pogues and the Dropkick Murphys, these certainly aren’t your grandfather’s shanties. However, the harmonizing in their version of Sally Brown is breathtaking, and Grace O’Malley and Randy Dandy-Oh are also not to be missed.

Friends Of The Shipyard and Fisherman’s Fayre

If you’re looking for a selection of authentic short-haul, halyard and capstan shanties with a few modern sea songs in the mix, look for the album simply titled Sea Shanties. This album is a great option if you’re looking to learn more stripped-down versions of these songs. From this album, The Wild Cape Horn and Tommy’s Gone to Hilo have always moved me, and their version of Barrett’s Privateers is also fun.

Click to read the book review of Sailor Song, the Shanties and Ballads of the High Seas, by Gerry Smyth.