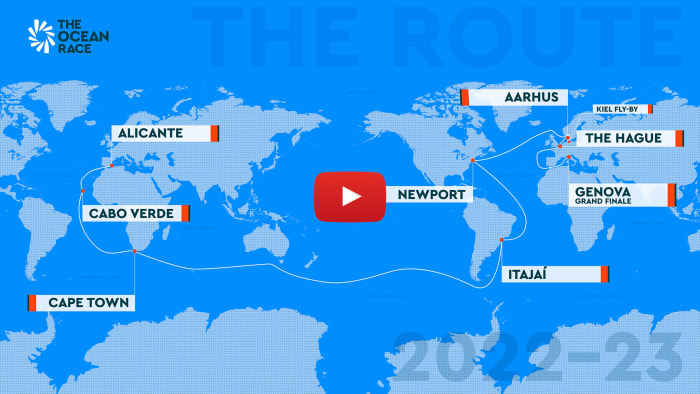 The Ocean Race will get underway early in 2023 after a five-year hiatus and a number of changes to the race’s formula, most notably the introduction of the IMOCA 60 as the race’s main class, while the VO65 fleet will be for emerging teams with a specified number of younger sailors per boat. The race is still being billed as the 2022-2023 edition despite no actual racing happening in 2022 because there is a prologue series planned for the final four months of the year.

Some of the recent regular stopovers are on the roster again and some past favorites like Cape Town, South Africa will be returning. Notably, however, there will be no stops in the Indian Ocean or Oceania, making a monstrously long leg from Cape Town to Itajai, Brazil the only Southern Ocean section. “We have added the longest leg in the history of the event–taking the fleet three-quarters of the way around Antarctica–and for the first time, the race will start and finish in the Mediterranean,” said Phil Lawrence, the Race Director. “The updated course and schedule for The Ocean Race 2022-23 provides an intense six-months of racing around the world and will challenge the best sailors and teams in a way that only The Ocean Race can do,”

Newport, Rhode Island, will once again host the American stopover. Additionally, this race will include a “fly-by” in Germany, presumably to increase the number of opportunities for spectators to see the fleet.

The schedule will be as follows: