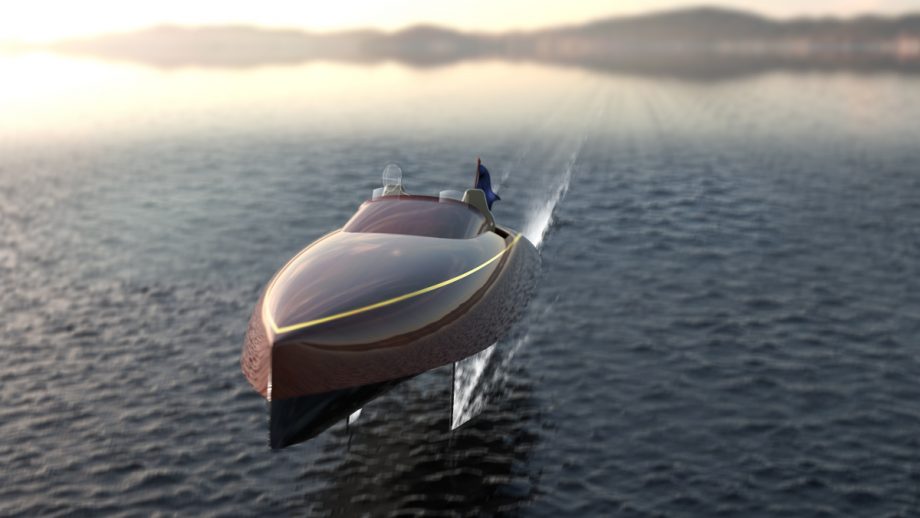 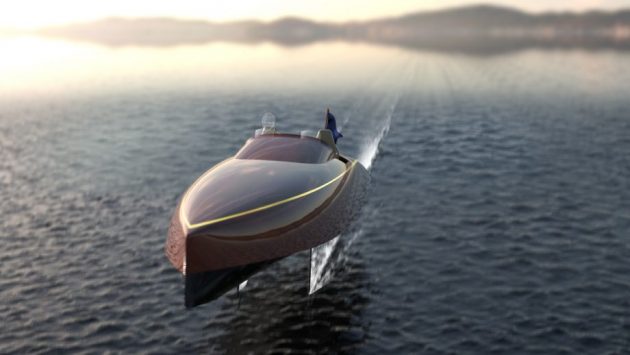 What happens when you combine cutting-edge America’s Cup foiling technology, the fabulously retro styling of modern classic yacht builders Spirit Yachts, and the visionaries behind the jaw dropping super-sloop Geist? Well, you get this: the Spirit 35 Foiler

This James Bond-worthy powerboat has been commissioned as a chase-boat toy by the same European owner as Spirit Yachts’ largest and most technologically advanced project to date, the 111ft super yacht Geist.

The foiling technology behind the boat was developed by BAR Technologies (BART), the innovation and engineering company which emerged out of Sir Ben Ainslie’s America’s Cup campaigns and develops commercial projects that harness some of the cutting edge development from the Cup arena. 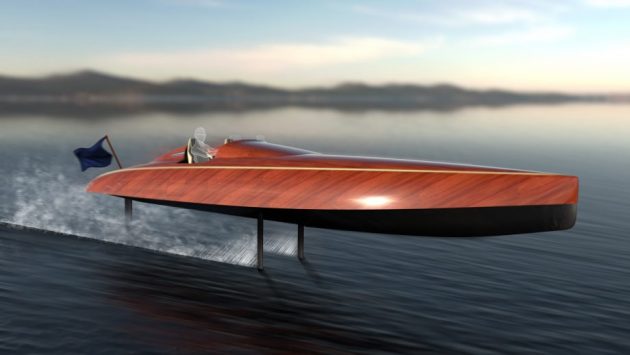 Like Baby Bootlegger, the Spirit 35 Foiler is also rather reminiscent of a vintage racing car, complete with token fold-down aero-screens and aerodynamic cowls enhancing gorgeous sloping aft sections. Those cowls actually hinge up and back to form part of an otherwise concealed and separate guest cockpit behind that will seat up to six.

For the moment Spirit and BART are choosing not to reveal details of the integral electric drivetrain partner, although have said there will be just the one propulsion unit. All they will say now is the claimed top speed is 27-28 knots, but the usual fast cruise speed will be in the low 20s, at which the quoted range is 100nm. The hull will begin to fly from around 14 knots.

The underwater profile is a modified deep-vee – with a sharp entry forward, a single step amidships, and flattened off towards the transom.

Sean McMillan says below the natural waterline is obviously all about lift, whereas above it is pure stylistic indulgence. The bare structure of hull and deck are likely to weigh little more than 2,200lbs (1.0 tonne) and ultimately her finished light displacement will be just 5,280lbs (2.4 tonnes).

The retractable foiling control technology is a development of various active systems developed by BAR Technologies over the past decade, including Ben Sir Ainslie’s extreme-foiling America’s Cup racers and the foil-assisted Princess R35 sportsboat, which was unveiled back in autumn 2018. 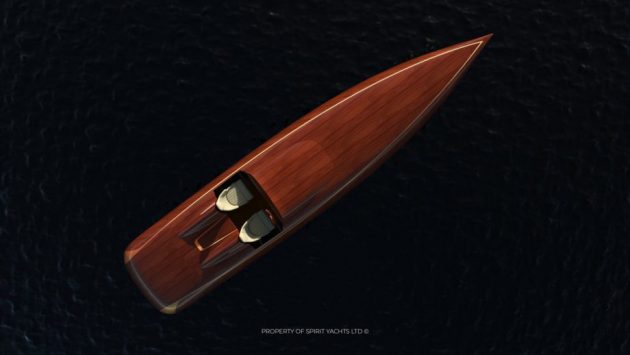 Fabricated from solid titanium, the Spirit 35 Foiler’s retractable appendages consist of a single T-foil rudder aft, which will control the pitch and yaw, and twin leg and single bar forward, which has wide port and starboard aileron-style trim tabs on its trailing edge that control roll.

Underway the flying attitude will be adjusted automatically via an IMU that takes inputs from various ride sensors. Probably capable of powering over swells of up to 5ft (1.5m) in height, she should register a flying draught of just 2ft (600mm). We’re told she will heel in to the turns reassuringly. 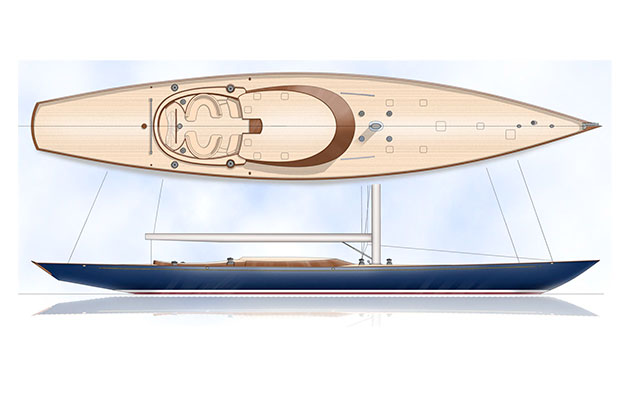 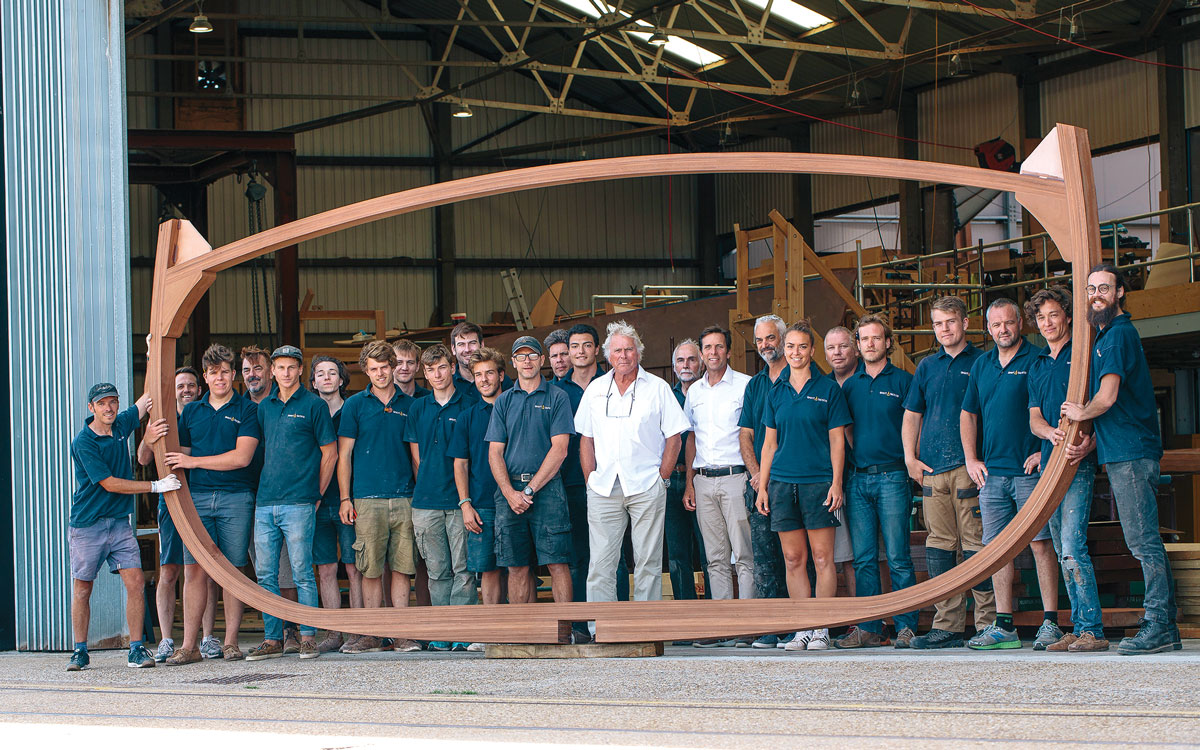 However, with the foils retracted for displacement speed cruising in shoal waters or berthing, the normal draught should be little more than a foot (0.3m). When raised, those three foil legs will stand visibly proud of the superstructure.

Construction is already underway at Spirit Yachts’ Ipswich, Suffolk facility. Alaskan ‘yellow cedar’ has been chosen for the ring frames and longitudinal planking, which will then be skinned with a vacuum-bagged layer of carbonfibre to add stiffness. Then the topsides will be further skinned with a decorative layer of African Sipo, similar to a mahogany, that will be finished with a high-gloss two-pack varnish.

Spirit expects to finish all its work by early summer when she will transfer to BART’s Portsmouth facility for installation of the hydraulics and carbonfibre appendages. Her owner intends to ship her around the world in a 40ft container along with Geist’s support stores.

For anyone who fancies ordering one, BAR Technologies’ CEO John Cooper confirms that it would be “reassuring expensive”.

Beside their new motorboat project, Spirit Yachts has six other cold-molded sailing yachts at various stages of construction.

It has an electric 44ft sailing yacht, due for delivery in spring 2022, an electric 52footer launching imminently, a 68-footer build just beginning and no fewer than three 72-footers in hand, one presently undergoing her sea trials, one in fit-out and another whose hull will soon be turned.

A Force for Change: Captain Liz Gillooly
How did I become a digital nomad?
Sailing in the Growth Zone
Best Black Friday Dehumidifier deals: Save up to 55%
Stable Diffusion 2.0 – What you need to know!