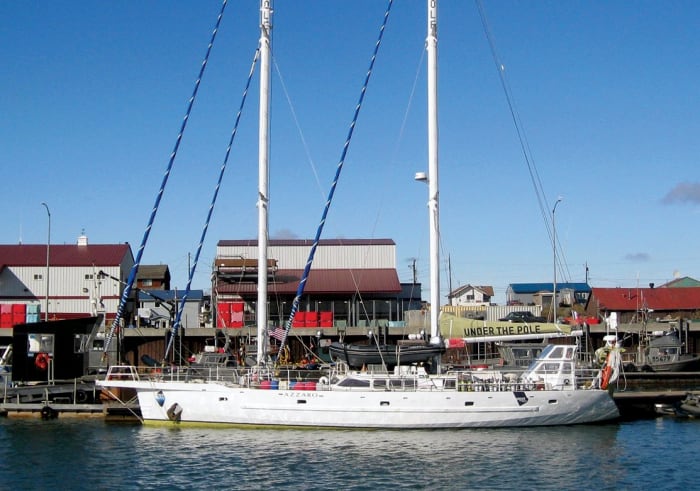 I was preparing some tea just before heading topside for my watch. Even though it was summertime, the tea was not iced—it was hot. That’s because our boat was in the High Arctic.

We were trying to complete a westbound transit of the treacherous Northwest Passage. If we succeeded, it would be particularly admirable because our sailboat was not some beefed-up, steel expedition vessel. Instead, she was a fiberglass production boat—a Tartan 42.

Suddenly, the boat started vibrating and screeching. I hollered up to the helmsman, telling him to kill the engine. The owner came barreling out of the aft-cabin, and we set about trying to determine the problem, which we swiftly concluded was a drive-line issue since there was no vibration when the engine was running in neutral.

The most likely possibilities were something wrapped around the prop, a damaged cutless bearing or a lost propeller blade. Because the engine has a V-drive, we were able to grab the shaft. It was extremely wobbly, which meant the neoprene rubber in the cutless bearing had likely worn down. This, unfortunately, meant we would not be using the engine for the foreseeable future—or the unforeseeable future, either.

We had left Cambridge Bay, Canada, at 69 degrees north latitude a couple of days earlier, and while the worst of the ice was behind us, you are nonetheless always fighting the clock in the Arctic. The reason is the massive polar ice cap that inevitably works its way south each September until it butts up against land in Alaska and northern Canada. Obviously, once that happens any kind of passage becomes impossible. Our best strategy was therefore to continue the 600 miles to the port of Tuktoyaktuk and hope we could find some kind of help.

When we were in Cambridge Bay topping off fuel, water and food, a rather amazing sailboat had arrived. Her name was Why, an appropriate question for any sailing boat taking on the Northwest Passage. Not only that, but apparently the lunatics on this vessel were even crazier than the rest of us because they had dozens of scuba diving tanks secured along the decks and a logo that said, “Under the Pole.” It was distinctly humbling to realize that while we had been feeling pretty good about our simply having been able to sail through the better part of the Northwest Passage, the crew of the boat in question had also been going diving.

The sail to “Tuk-Tuk,” as it’s called, sans auxiliary power, had more than its share of “moments.” The toughest stretch was the long narrow channel that leads into the harbor itself, with shallows to either side and a ferocious current among its many frigid delights.

It would be hard to find a more “end of the road” town than Tuktoyaktuk. In fact, until 2017, when the highway finally came through, there was not even any kind of road to end there. With a population of less than 900, we were doubtful as to our chances of finding anyone capable of helping us out.

Once we were anchored, we attached a submersible camera to a boathook and discovered the cutless bearing in question had, indeed, managed to squirm completely out of its strut. Not having any kind of cold-water dive gear, our prospects looked grim.

It was then that the Neptune of the North chose to smile upon us. For who should come sailing in, but arguably the one vessel in the entire world best suited to help us out of our predicament. We promptly sent a begging party over, and a half-hour later two of the Why’s best divers arrived in the Why’s dinghy.

The plan we had concocted was to drive the bearing back into its housing and then attach a hose clamp at either end to keep it in place. Theoretically, the two clamps would do the trick the remaining 1,000 miles to Nome, Alaska.

I saluted the ghost of Jacques Cousteau as the first diver, Sylvain, a Frenchman, went to work. Because Tuk-tuk also serves as the outlet for the mighty Mackenzie River, the water was the color of cafe con leche, which meant zero visibility. Nonetheless, with just a hammer and screwdriver, Sylvain, our Miracle Worker, had us up and running again in about 20 minutes.

We offered to pay Sylvain and his helper for their services. But being a not-for-profit and already having plenty of sponsorship dollars, they told us no thanks. Because they were French, though, we knew their weak spot and succeeded in loading them up with some of the very best of our supply of wine. The whites were, of course, already well chilled.