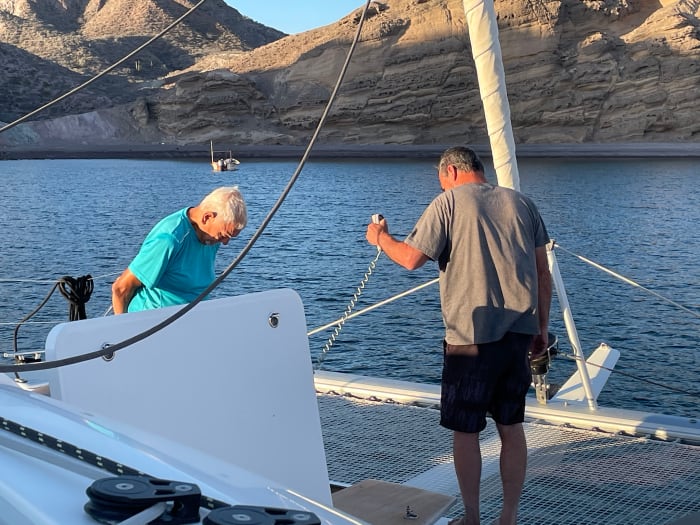 Watching charterers make a run for the last mooring in a cove is fun—and weird. I always wonder why so many would rather try to catch a mooring than drop the hook. Maybe charterers don’t trust their anchoring skills, but it’s harder to drive up and grab a buoy than most people think. I actually find anchoring not only easier, but safer and more enjoyable. It also allows you to get off the beaten path. Here are some reasons why moorings aren’t always the answer.

You never know what you’re getting

Moorings are set up differently, and you never know what exactly you’re going to encounter. I was once forced to catch a mooring in a deep bay on the island of Taha’a in French Polynesia. It was the first day of the charter, and my crew eagerly ran forward, caught the mooring, strung the lines from the catamaran’s two bows and walked back to have a beer. I went up just to check. They had caught a jug and put the lines through the handle without lifting the contraption out of the water far enough to see the eye in the hawser below. It was blowing 20 knots, but all aboard believed we were secure and ready to go ashore.

Some moorings have one buoy. Others have two. Some have a straightforward setup with a line and wand. Others require you to hoist them well clear of the water to see which of the mess of lines below you need to tie off to. Some moorings are private, and unless you understand the local coloring scheme, you may find yourself receiving a rude awakening in the middle of the night if the owner comes back. Finally, unless you can personally inspect it, it’s impossible to know the condition of the gear connecting you to the bottom, so don’t just assume it’s safe. If you’ve inspected the anchor/chain/windlass aboard your charter boat, you’re probably miles ahead in terms of safety.

The chaos on the bow

Again, approaching a buoy can get exciting. In Bequia, I had five people on the bows of a large catamaran and had told them to relay to me when we were getting too close to any of the other boats as I threaded my way through the mooring field. I couldn’t see the bow on the opposite side of our 50-footer and got zero feedback until all five heads snapped back with looks of terror. The smoke that came out of the engines as I put them hard in reverse was impressive.

Catching a mooring requires more communication than anchoring. Driving up to a mooring means eventually it won’t be visible from the helm as it disappears behind the bow. Your team will have to tell you where the ball is, how far it is, whether they’ve successfully caught it with a boathook and where they are tying it up to. Pretty much any newbie charterer will have problems with all this. Moorings can also be heavy, making leaning over with a boathook to grab them potentially dangerous. It’s a lot easier to just pull up to your place of choice and drop the hook than it is to hit a hard-to-see target and then keep station (in the wind and current, no less) while the foredeck crew sorts itself out.

With most moorings, you’ll to pay anywhere from $10 to $70 per night. That gets expensive. It’s also not always clear who to pay. Some moorings are on the honor system with a drop box. Others are owned by a nearby restaurant or marina, or just some guy. It can get confusing when someone pulls up in a dinghy demanding to be paid for a mooring, especially since there’s usually no receipt involved.

Finally, mooring fields in popular areas, in particular, can be real parking lots, not to mention pretty cozy (read: noisy and obnoxious). If you anchor out, on the other hand, you are more likely to get a lovely cove to yourself, well off the beaten path.

Granted, there will be times when you have no choice but to catch a mooring. Examples include marine parks where anchoring isn’t allowed or where the depths exceed a safe rode/depth ratio for whatever gear you have aboard. Nonetheless, it pays to dial in your anchoring skills before your charter so you’ll have the option of doing so. Learn how the type of boat you’ll be taking out is likely to swing and how much rode you need, depending on whether it’s all chain or a combination of chain and rope. Work out a set of hand signals with your crew and learn to use a snubber or bridle to take the pressure off the windlass. That way, at the end of each day you have the option of taking your time and then sitting back and watching your fellow charterers as they take part in their daily mooring races, a spectacle if ever there was one!