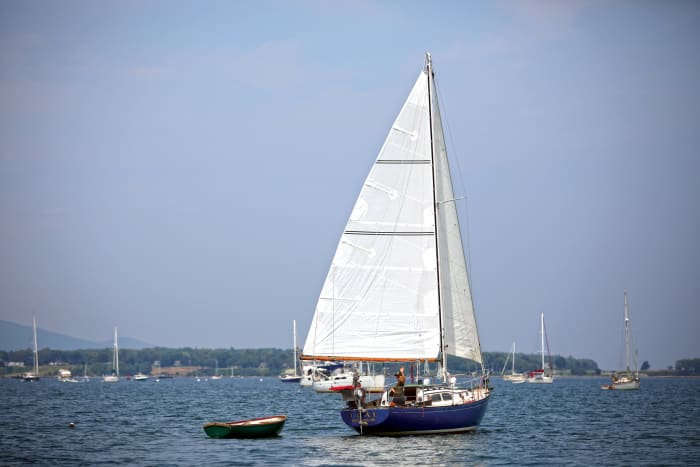 I’ve always known the importance of having good sails. As a low-budget boat punk, I prioritize making sure I can get where I’m going with the help of the wind, as opposed to under power. It isn’t necessarily my goal to be engineless, or basically engineless. It just happens that way, as I never seem to have enough money to put much in the way of resources into an engine when there are other, more pressing matters necessary to make the boat seaworthy.

My current boat, Teal, is a 1962 Tripp 29 with an electric inboard that has a max range of nine miles traveling at 3 knots in a dead calm. Before that, I had a 2.5hp outboard on a boat displacing nearly 10,000lb. At times my only form of auxiliary propulsion has been a sculling oar. My first boat had an old Johnson 9.9 that died soon after I bought it. One thing these boats did all have, though, were good sails.

My 1976 Bristol 24, the one with the short-lived Johnson outboard, came with a main that had been granted the gift of longevity after being stored indoors for many years. I added a second reef point, proper slab reefing and away we went.

Yet more new-to-me canvas came when I was taking a recently acquired 1968 Pearson Ariel 26 from Lake Champlain to the Florida Keys and the main started ripping every time I hoisted it. Clearly, something needed to be done. Being a production boat, I was able to hop onto an owner’s forum to ask if anyone had a used sail in better condition than mine. I was shipped a sail that had years of life left in it—a huge improvement over its predecessor, which had only minutes.

My next boat, Sohund, a 1978 Great Dane 28, came with a main that had been replaced a decade earlier, but was still barely used because the owner had died not long after it was delivered. With such nice canvas, Sohund and I had great fun going on sleigh rides over big seas in Pamlico Sound, the Chesapeake Bay and on the open Atlantic.

Unfortunately, when I bought Teal, I once again found myself in a situation where there was much to be desired in the sail department, the boat’s main, in particular.

That’s where Precision Sails came in.

Based in British Columbia, Precision specializes in making new sails for used boats at a reasonable price. The only caveat is you have to take all your own measurements. This can be a bit intimidating for the uninitiated. But it also eliminates the need to pay a sailmaker to do the job for you. Don’t let your local loft scare you into thinking you can’t take these kinds of measurements yourself. So easy, I say, even a boat punk can do it!

As an added benefit, watching Precisions’ online tracker after I placed my order was like watching the Domino’s Pizza delivery tracker as a drunk college student—only better, as my new sail will undoubtedly take me farther than my liberal arts degree ever will.

Precision’s CEO, Darryl Hodgson, founded the company in 2012 after years of sailing and racing. A recent business school grad, he found himself blowing out far too many sails he could barely afford to replace aboard the Capo 26 he was racing at the time out of his home port of Sidney, British Columbia. He also found himself becoming increasingly frustrated with the lack of customer service given to the owners of older, pre-owned boats by all too many sailmakers.

He aimed to remedy that.

“The difference between our product and a lot of the other sails on the market is the detail,” Hodgson says. “We have more fine details, more layers of patching, more layers of tape, heavier-duty batten pockets and stitches. More labor and time goes into the sails, with an elevated level of customer service.”

Like many entrepreneurs, Hodgson started out by locking himself in his basement and building a business that would streamline the process of do-it-yourself customer measurements. With no formal training in sail design, he spent countless hours honing the process, developing the standards that serve as the foundation of the Precision business model to this day.

Over the years, the company has grown to where it now has both a staff of 25 in British Columbia and a dedicated loft in Shenzhen, China, servicing thousands of boats a year. It also includes a number of in-house departments overseeing everything from sales to design, production, shipping and logistics. These days, the company can build any type of sail you can think of, with any detail, logo or design aesthetic imaginable, from any kind of material available.

Hodgson recalls Precision’s first really notable and exciting job as a young company—a huge headsail with a 25ft-wide logo for an 85ft Youth with a Mission ship in the Caribbean. Today, the company prides itself on its ability to build sails for sailors from all walks of life, whether it’s sails for Wednesday-night beer can racing or an ocean crossing.

The company also remains committed to providing its clients with the best customer service possible throughout the design process. If you ever find yourself waking up in the middle of the night wondering if you gave them the right measurements for your mast gate and how that might interfere with the track and sliders you ordered, fear not. Your sail designer is a phone call away.

“‘Just pick up the phone’ is something we say around the office a lot,” Hodgson explains. “Phone first, e-mail second. If there’s an issue, call us to take away all that stress.”

Aboard Teal, the first order of business was getting a quote for the sail from a member of the sales team. Ultimately, I elected to go with a mainsail with three reef points and four partial battens made from Precision 500 Series Cross Cut Dacron. I also opted for a Tides Marine track and accompanying sliders. After that came the aforementioned measuring process.

Of course, you want to be as precise as possible, but do you need to quadruple check every measurement down to the 32nd of an inch and take 12 hours doing it as I did? Probably not, especially true since, in a true stroke of genius, Precision has a number of procedures in place to help compensate for any errors you might make. When sending in your measurements, for example, you include photos of exactly how you took them, with the photos showing where the tape measure actually fell on what you were measuring. Expect to have to figure out the basics, like the luff, leech and foot length of your old sail. Also be ready to calculate things like maximum hoist length, and reef and tack setbacks. All of this is made easy with the help of Precision’s measurement forms and a neatly organized playlist of how-to videos.

Beyond that while Precision’s sail design software includes the ability to count pixels from the measurement photos it receives, the ultimate secret to getting an exact fit for every sail is the company’s aforementioned commitment to keeping in touch with its clients. If something looks off, expect a phone call from someone at Precision to double-check.

There’s also a video conference call that goes into the creation of each sail. You can go as deep into the design arcana of your new sail as you want or take a complete hands-off approach. It’s up to you. To start out, a Precision sail designer will build your rig, adding in a 2D outline of the foot round, roach and luff curve. After that, a 3D image is generated, which is then tweaked to match your specific needs.

“Sailing and sailmaking is a spectrum,” says sail designer Jeremy Roszmann, who has been with the company since the beginning. “People like to have these black-and-white definitions of a sail, like a Code 0 or A-sail, but as soon as you shift one thing it becomes personalized. That’s the fun part.”

The final step includes selecting things like batten length, reef-eyelet locations, sliders, draft stripes, correct support patching for high-load areas, insignia printing, etc. Once that’s done your sail is ready to go into production. The entire process, from start to finish, takes about six weeks. The fit of the sail is guaranteed.

When my new main arrived and I started to bend it on, it made those same noises I’d heard in the past sailing aboard other people’s expensive raceboats. It’s a sound I’ve also occasionally heard aboard other passing yachts, but not a sound I’d ever thought I’d hear—or be able to afford to hear—aboard a vessel of my own. The sound of a brand-new sail!

Sure enough, my new mainsail and track not only fit perfectly, they work like a dream. Reefing downwind is a breeze. Upwind, it feels like my boat is ice skating. A reach feels like a point of sail to build dreams on. There may be a thousand other projects to get my boat seaworthy, but with this one complete, it feels like I’m truly on course.

Now for that old jib…

Ed Note: for more on Precision Sails, including more on the measuring, design and ordering process, visit precisionsailloft.com.