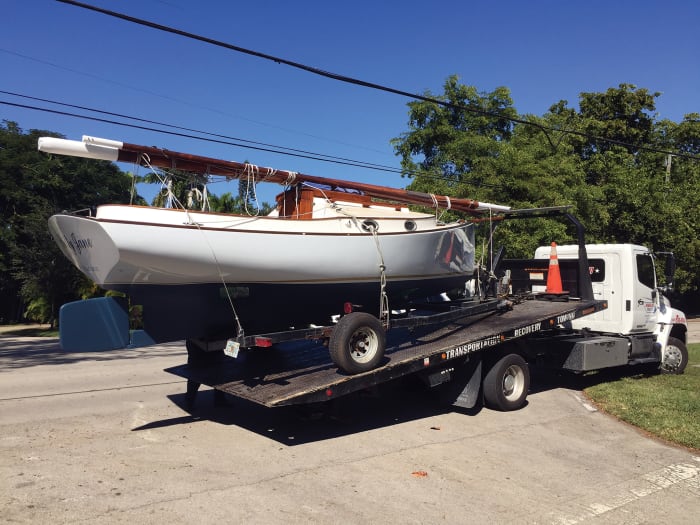 Gragkkkk! Schschs! These are NOT the sounds you want to hear as you trailer your boat to the launch ramp. I was about a mile away from the ramp at the time, and looking in the rearview mirror I immediately noticed Betty Jane, my 1982 Mystic 20 Catboat, was now riding a good deal lower than she should. Slowly pulling over to the side of the road, I got out and found the tongue of the trailer had broken in two and the front of the trailer was now dragging on the pavement. This was not the way I’d envisioned putting Betty Jane back in the water for her first sail after an extensive refit.

Luckily, I was able to pull the car and trailer far enough over to the side of the road that they were out of the way and not blocking traffic. I was also quite lucky in that the entire tongue hadn’t given way, freeing the boat and trailer to go careening down the road on their own. I’d heard stories of such tragedies and was glad not to become another statistic.

I called a towing company and asked them to send a flatbed tow truck to pull Betty Jane and the trailer onto the bed of the truck and take her to the launch ramp. While waiting for the truck to arrive, I reflected on the age of the trailer and my ill-found hopes that I could get one more trip out of it. I’d known the trailer was old (as old as the boat) and had seen signs of rust. I’d even paid a welder to put an extra steel plate on one of the support beams only a few months earlier. Too bad I hadn’t looked at the tongue more carefully and had that reinforced as well. The joys of hindsight!

When the truck arrived, the driver was sympathetic and offered to take the boat home. But I wanted her in the water, so off we went to the ramp. He said this was the first time he had launched a boat from his trailer. The launch went smoothly, and after I pushed the old, broken trailer to the back of the parking lot, I motored Betty Jane over to the sailing club to step the mast. Unfortunately, when I walked back to the ramp, I discovered I now had a parking ticket on my car, since only vehicles with trailers are allowed to park there. The fact that I did, indeed, have a trailer in the lot—just not attached to the car—was not accepted as a valid excuse.

After that I had the unenviable task of calling a junk dealer to come and remove the old trailer, incurring yet more expense. With the tow truck, the junk dealer and the ticket, this had to be one of the most expensive boat launches in history!

Of course, I also now had to find a way of replacing the old trailer. This was going to be a bit difficult because Betty Jane was now out on a mooring and could not be measured accurately to ensure a good fit. Triad trailers make a trailer specifically for Mystic 20 catboats of Betty Jane’s 1982 pedigree, but the company is located in North Carolina, a long drive from my hometown of Miami, Florida. There are a number of trailer manufacturers in Miami, as well. However, it seemed none of them was interested in building a trailer without accurate measurements. Finally, I found Caribbean Trailers (caribbeantrailer.com) where owner Carlos Colunga said he was willing to take a chance, and using photos of the old trailer and some basic measurements of the boat, he built an brand-new aluminum trailer with four small hull pads and a keel guide running along the centerline.

Come August, with a number of hurricanes starting to make their presence known in the Atlantic, I decided to haul Betty Jane and take her home for some more TLC. Alas, I also immediately started making yet more mistakes.

My first mistake was not checking the tide tables and finding when I got there that I was going to have to haul her at low tide. This is not ideal, since the lower ends of all too many ramps are not in great shape. Nonetheless, I decided to give it a try.

Arranging the trailer in the ramp with the water over the fenders, I floated Betty Jane onto the trailer and snubbed her bow up to the roller. So far, so good. My hope was that as I slowly pulled her out of the water, she would settle onto the trailer correctly. This, however, was a no-go. After hauling her about three feet up the ramp, one of the wheels got stuck in a pothole. I backed up and tried again. Still no luck.

It was then that I made my second mistake. I should have called it a day, taken Betty Jane back to her mooring and tried again when there was more water. But, no, I decided to recruit another willing boater with a really powerful pickup truck to try to and get the job done then and there. He succeeded, but in doing so the front, portside support pad broke, which meant that while Betty Jane was now sitting on the trailer, she was also now listing precariously. My friend David and I jury-rigged a support to keep Betty Jane clear of the fender and then carefully tied her down for the slow 10-mile ride home.

With Betty Jane back in my driveway, I surveyed the damage. The keel guides were too narrow, and the metal supports had put a series of small gouges in the bottom of Betty Jane’s hull. (Arghhh!) Even more worrisome, the pads were so small they were now pressing in on the hull with sufficient force to create a number of depressions and even, in one spot, a small crack. (Ouch!) After grieving briefly and cursing myself for my stubbornness, I put some additional supports under the hull to prevent any further damage and called up Carlos at Caribbean Trailer. He promptly came over, stabilized the boat and drove Betty Jane over to his shop, where he hoisted her off and made the necessary repairs and changes to the trailer to set things right again.

When he was finished, he placed the boat back on the trailer and I drove her home for some rest and a makeover. To start out, I apologized to Betty Jane and filled the small gouges created by the keel guides and checked to make sure the concave bends in the hull that I’d seen had reset to their original shape. I was especially thankful the small crack in her hull was purely superficial and that there had been no structural damage. Having a thick fiberglass hull from the early 1980s has its advantage.

Over the next few months, I also refurbished Betty Jane’s interior, replaced the two feet of her wooden boom that had started rotting and made her a new stylish boom crutch.

The real test came when I eventually launched her again. I went at high tide (I’d learned that lesson) and everything went smooth as silk. Betty Jane is now once again riding on her mooring with the trailer parked in my yard waiting patiently for the next hurricane season. Some might say, “All’s well that ends well.” However, with a little more thought and less stubbornness, I would have had a much easier time of it. A word to the wise: haul at high tide, know your limits and if you have to replace your trailer, do it with your boat still on dry land.

What I did wrong:

What I did right:

• Found a great trailer builder who was able to fix my mistakes for me!

• Made sure to put Betty Jane back to rights again afterward

Got a good story to share? Send it to sailmail@sailmagazine.com