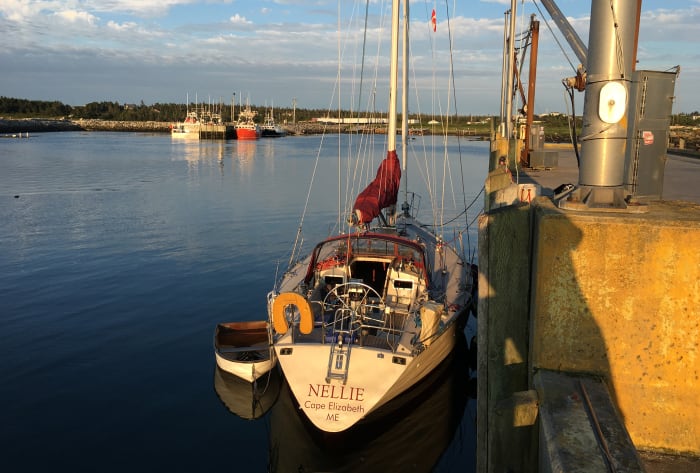 Like an ostrich on a bad day, I’m head-down in the lazarette of Nellie, my Beneteau First 42, dealing with the propane tank. My wife taps me on the shoulder, and I rise to see a pair of foiling catamarans accelerating onto their carbon-fiber wings. As the blood drains from my head, their hissing wakes sound like tearing dollar bills. They disappear behind the bulky cruiser next door, a 66ft Oyster with a uniformed crew and a tender as clean as a wedding cake. I nod and return to the task at hand.

Amidst the glories of this era of foiling Cup racers and electric furlers, I’ve also found myself enjoying the resurgence of simpler sailors, the younger ones especially: sailors like Jerome Rand, who left Gloucester, Massachusetts, in October of 2017 aboard an unpretentious Westsail 32 to sail round the world; Mainer Holly Martin, who refit a 27ft sloop and set off south for the Caribbean and Panama Canal; Matt Rutherford, who took off from Annapolis aboard another 27-footer to sail around the icy top of North America, then south to Cape Horn and back north again to the Chesapeake.

These kinds of sailing stories please with their minimalism. The simple sailor’s world of creaks and spills and dead batteries seems somehow closer to mine than those spaceship-racing craft aboard which races are often lost the moment their hulls inadvertently touch water. Don’t get me wrong, I’m impressed. It’s all sailing, and it’s all great. Nonetheless, my hat is off to those sailors content to still breast the waves at 5 knots—and the tradition they represent.

One of my heroes is sailor-climber-soldier Bill Tilman, an adventurer who was not only among the world’s most accomplished mountaineers during the Interwar period, but who, in the ‘50s and ‘60s, also took to sailing like the proverbial duck to water. In this age of superyachts and carbon-fiber racing cats, it’s worth remembering Tilman and the kind of sailing and adventuring he represents.

Shortly after launching Nellie this year, a friend and I were leaving the dock with a load of ice, when he gazed at another regally varnished cruiser and said, “Nellie sails great, but she’s not as pretty as that.”

Naturally, I was a little insulted. I asked him, “Ever heard of Bill Tilman?”

Tilman’s spirit immediately clears up misunderstandings like this one. Tilman fixed up an old Bristol Channel Cutter, dubbed her Mischief and sailed her first from England to climb in Patagonia, then from England to Greenland on no less than 10 separate occasions. He also once sailed to the remote Crozet Islands in the southern Indian Ocean among other wild destinations. No uniformed deckhands for him. It’s Tilman who penned the notorious Times of London ad: “Hands wanted for long voyage in small boat. No pay, no prospects, not much pleasure.”

Tilman and the many sailing and climbing books he wrote (see below: Bill Tilman’s Books Reissued) are now largely forgotten, but he’s what Chuck Norris would be if he had real grit. When Tilman found himself having to return to England from Kenya in 1929, he did so by riding a bicycle the entire way across Africa to Cameroon in search of a ship to take him there. During the First World War, he fought at the Battle of the Somme. During World War II he was one of those on the beaches at Dunkirk and later parachuted into Nazi-occupied Yugoslavia to fight with the local partisans. Medals and acclaim followed.

After the war he quickly returned to climbing, taking part in a number of expeditions to Nepal and Pakistan before setting sail aboard Mischief. To this day, he is remembered in the climbing world as the archetypal “dirtbag climber.” No frills, just action, much like today’s simpler sailors, whose single-mindedness leaves them so out of step with a consumer culture that prefers to spend its money on fancy outfits and car loans. The sea spoke directly to Tilman’s need for physical tests amid the forces of nature at the same time it served to bring out his refreshingly self-deprecating sense of humor, as in: “In the long night watches at sea, even a man whose mind is generally a blank is obliged to think of something.”

No varnish or yacht clubs for Tilman: rather a sea-capable, rough-painted cutter and a craving to sail her when and where he pleased using little more than a sextant and lead-line. He once joked he’d charted a particularly troublesome rock in Greenland the old-fashioned way, “By the infallible method of running into it.”

As for his promise of “no pay, no prospects, not much pleasure?” People flocked to take advantage of the opportunity to the point where he had to turn them away by the dozens. Why? Because it’s precisely this kind of stern simplicity that represents the most direct engagement with the wider world. For Tilman, the goal was the experience, never appearances.

To be clear, I’m no Bill Tilman. Nor do I aim to be. Aboard Nellie we have AIS, we have a nice set of sails and solar panels, we have the necessaries to make fast, safe passages with a keen crew.

At the same time, the tender has a leak and there’s plenty of cosmetic work beckoning from the patches of crazed gelcoat on Nellie’s decks and her stained cabin sole—which is fine by me as well. I’m guessing Jerome Rand’s Mighty Sparrow and Holly Martin’s Gecko tend to look a little scuffed as well, for the simple reason that for sailors like these actually going places is far more important than simply looking like you could get there.

Tilman told his fellow climbers, “Inaction in the face of fleeting opportunity is a crime.” He has a point these young sailors all seem to grasp: I have limited time—limited time left in this life, limited time with the people who matter, limited time away from work. If I use that time waiting for the absolutely perfect kind of gear or polishing my rig I’ll never get a chance to see what awaits me elsewhere, over the horizon.

So maybe Nellie isn’t pretty at first glance. Bill Tilman wasn’t pretty either—yet he managed to live a life of incredible substance, thanks to his hunger for adventure and a nose for the essential.

Looking up from my work in the lazarette, I see a couple of kids rowing past in a tiny pram, laughs echoing across the anchorage. Minimalism is a spectrum. One skipper’s low-budget compromise is another’s luxury.

Again, I’ve got nothing against those race boats out there going 30-plus knots. Same thing with all those polished cruisers. I’d love to join them for a sail.

In the meantime, I’m going to continue to learn from the simpler sailors of the world, and the way they keep reminding me that getting out to sea is the main thing, and that grit outlasts shiny amenities. Plenty of people love to criticize Millennials. But let’s also recognize today’s bold, young sailors and the way they’re not afraid to use the technologies of old to voyage to what for them are brand-new places.

The late, great Bill Tilman would undoubtedly have been proud to see the wakes blowing off the sterns of the ragged boats sailed by these austere adventurers.

For those interested in learning more about Bill Tilman, his writing and his many adventures, the UK’s Lodestar Books recently finished assembling a complete set of new editions of Tilman’s work after years of effort. Tilman’s seven mountaineering titles, his eight sailing titles and the Tilman biography High Mountains and Cold Seas, by J. R. L. Anderson, are all here and available either individually or as a complete set. Each book contains all of the text, photographs and maps of the first edition. Each volume also includes a foreword by such present-day writer-adventurers as the climbing world’s Sir Chris Bonington and sailing’s Sir Robin Knox-Johnston (the latter a shipmate of Tilman’s).

For those not yet familiar with Lodestar, a publisher expressly dedicated to “new and neglected nautical writing,” do yourself a favor and check out its other titles as well. These include everything from out-of-print books, like Erling Tambs’ The Cruise of the Teddy, to multihull pioneer James Wharram’s recently published autobiography, People of the Sea. The company’s commitment to preserving the world’s maritime literary tradition is truly to be commended.
Visit lodestarbooks.com for more information.