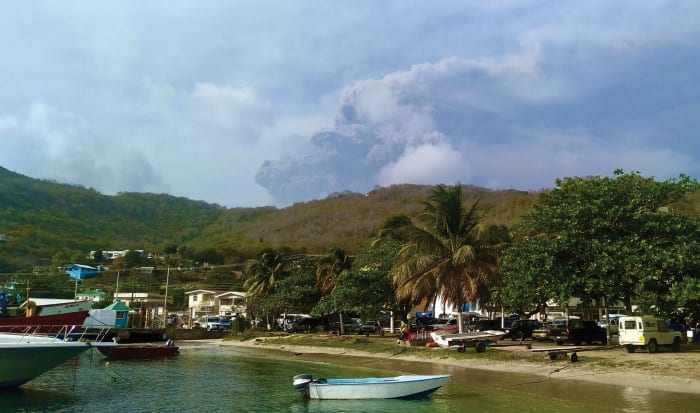 This past spring my family and I were at anchor aboard our 50ft steel-hulled cutter, Atea, off Bequia, a small island five miles south of St. Vincent in the Southern Antilles. Bequia’s large, protected bay is lined by a collection of beach bars, restaurants and hotels, and is a popular cruising destination, albeit a quieter one this year due to reduced tourism as a result of Covid-19. Nonetheless, while the steel bands weren’t playing into the wee hours of the morning as they typically do, the happy hour specials still served to draw in crews from the few dozen yachts there.

As late as Friday morning, April 9, that relaxed atmosphere continued, even as residents of nearby St. Vincent were being evacuated from the red zone surrounding La Soufrière, the volcano at the north end of the island. Prior eruptions have occurred as recently as 1997, but the volcano has been dormant for the past 25 years. Even as the first hot plume of ash shot into the air that day, there was little obvious impact to the residents on Bequia, as shops remained open and business continued as usual. The atmosphere quickly shifted, though, at around 1900 when a second eruption drew everyone out into the streets to watch the growing plume of ash. There was a feeling of fascinated excitement as small groups gathered to look on as the mushroom cloud continued to grow. Very few, though, took it as a sign to move out immediately. A handful of cruisers weighed anchor. A few tourists also stood by, waiting for a ferry to whisk them away. But the rest of us waited, wondering what would come next.

What came next was an umbrella of volcanic ash that spread a layer of fine gray dust across all of Bequia that night. We woke to an eerie white haze and a layer of this same ash covering everything. Surgical face masks reserved for pandemic protection suddenly found a new purpose. Anchor after anchor came up as boats cleared out. By mid-morning only a handful of yachts remained, though because of Covid protocols, we were all still restricted to the Grenadines and could only get as far as the islands of Mayreau, Union and the Tobago Cays—a mere 35 miles to the south. The chatter on the radio was constant, as cruisers tried to determine where to go or how far we would have to travel to find clean air. Crews wondered whether the omnipresent ash would ruin sails or cause damage to engines.

There was no escape. Every morning the dozen or so boats sheltering in the Tobago Cays, where we ended up, would get a thorough scrub, after which the ash would continue to accumulate throughout the day. The air was hard to breathe. The ash got everywhere, in the eyes, nose, and mouth. After the first three days, things finally started to improve. On the fifth day, we saw our first clear sunset. Finally, a wind shift sent the plume east, allowing us to make out the surrounding islands under blue skies at last.

It had been an extraordinary week for all of us in the Grenadines. Luckily, the impact on my husband, John, our kids, Braca and Ayla, and me was minimal, as Atea was fully provisioned, and we were planning on spending a month in the Grenadines anyway.

For those in transit, though, things were a good deal more complicated. Cruisers in quarantine on St. Vincent were forced to remain at the epicenter of the ash fall. Those en route were forced to turn around and find a safe haven elsewhere. Canceled flights, altered ferry schedules and the impact of Covid-19 testing and quarantine periods only further complicated travel arrangements. The result was yet another challenge as the cruising community continues to make the best of this most unusual year.

Ed Note: For the latest on the adventures of the Koropp family, go to svatea.com