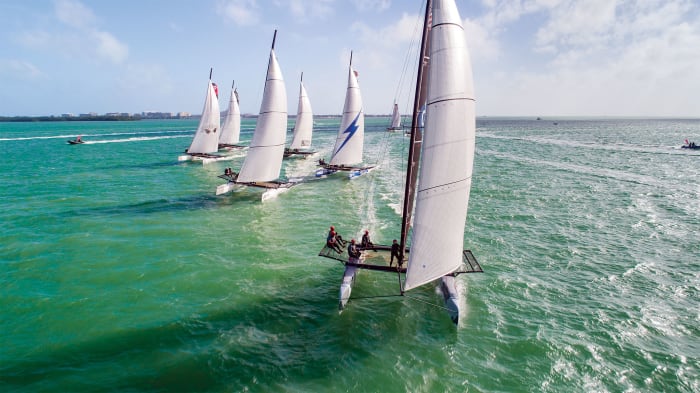 Since then, the class has continued to grow. Today there are two main fleets, one on each side of the Atlantic, and the teams do a lot of traveling within their respective regions. To name a few destinations, in 2021 the racing circuit has events scheduled for Newport, Miami, Denmark, Italy and the Netherlands. M32s taking part in racing have historically included those hailing from the United States, Bermuda, Sweden, the Netherlands, Denmark, Italy, Switzerland and the UK, to name a few. This may seem like a huge logistical hurdle to get people and boats from venue to venue, especially when many of these racers also have day jobs. However, the class doesn’t seem too bothered, in part because the boats are expressly designed so that they can be disassembled and trailered or shipped in a container. The dimensions work out so that two boats can fit in a single container and be sent together from one venue to the next. This cuts costs for travel and encourages teams to work together on transport logistics.

Though Marström originally imagined the M32 as a secondary boat for grand prix sailing teams, it has grown increasingly popular with individual owners and their semi-professional crews. Larry Phillips is one such owner who spoke with SAIL just after winning the last event of the Miami Winter Series, landing his M32 Midtown in second place overall. “One day I was driving over the Newport Bridge, and I saw these boats that were going abnormally fast. I had actually never even sailed a boat before,” he recalls. Despite his lack of experience, Phillips’s wife encouraged him to give it a try when some M32 demos became available at the Newport Boat Show. “It was fairly terrifying. I didn’t even want to touch the tiller, but it was a thrill and something I could really see myself doing,” he says. “It was fast, it was exciting. It was a real sport. But the only way I was going to get better was to buy a boat.”

The Boat: By design, the M32 is an ultra-speedy carbon-fiber cat. Weighing in at just over 1,100lb, the boat can fly a hull in just 5 knots of wind. Racks extend the trampolines outward and allow the crew to maximize its hiking ability by keeping its weight well outboard. With the racks installed, the beam increases by 50 percent, from 18ft to 27ft. The jib-less rig, called an “unarig,” keeps things simple for the crew. The boat is built from prepreg carbon fiber and epoxy over a Nomex core.

His crew these days consists of everyone from a friend who’s a fellow sailing novice to an ex-America’s Cup sailor who acts as their tactician. Typically the teams are semi-pro, including both professional racers and less-experienced crewmembers, which is all part of the boat’s appeal. One family-based team is even led by an owner and her niece.

“It’s a relatively young class, and there’s not a lot else like it out there, so every team is kind of starting from scratch when it comes to learning to sail this boat,” says Director of M32 North America Dave Doucett. “There’s no one who’s got it locked down. Everyone is figuring it out at the same time.”

This amalgam of pro, semi-pro and hobbyists also serves as a recruitment pipeline to the big leagues. With a dozen or so SailGP and Americas Cup pro sailors racing in the fleet, young up-and-coming professionals have plenty of opportunities to learn from and network with top-level sailors. Multiple SailGP teams have even chartered M32s to train on.

“The boat wasn’t designed be biggest and most extreme, it was supposed to be a bridge between the two worlds,” says Doucett.

As for Midtown’s crew, Phillips says the varied experience levels of the crew don’t keep them from having a good time or winning. “We still get into racing situations where we’re still not really sure about the rules. We’ll call an umpire afterward and say, ‘We thought we had the right of way around this gate, what happened?’ but we’re fairly casual. I know other teams have coaches and watch drone footage, but our primary goal is just to enjoy it. We don’t want to go to that level where we’re getting upset and angry when we don’t win.” Phillips even considers his beginner status something of a blessing in disguise, saying, “I don’t have to relearn anything or change how I do things.”

Another selling point for the growing class is the M32 Academy, a program that runs training camps to get sailors and teams ready for competition. Sailors must complete the “Basic Safety” and “M32 Essentials” courses in order to lease a boat from Aston Harald Sports (which is also the former owner of the World Match Racing Tour). Other modules include “Set Up and Tune,” “Race and Rules,” and “Boat Handling,” which create a soft place to land, so to speak, for new owners who aren’t yet experts in maintenance or the racing rules. The academy website even includes video tutorials for things like assembly and mast stepping to help get people started (m32world.com). Amateur and professional sailors alike benefit from this training program, as it helps ensure methodologies are standardized across teams. This in turn makes it easy to borrow crew across the fleet, strengthening the class rapport.

In addition to M32 Academy, the class also (like many classes) makes a point of running a practice day the Friday before each weekend of racing. During this time teams can go out and face off against each other, test their start strategies and make sure that their boats have been set up properly. Because grinding and trimming aboard an M32 require huge amounts of strength and stamina, sailors report that not having to go out early on race day to practice and figure out these kinds of adjustments makes a huge difference. The result is less stress, better results and a better time overall on race day.

Finally, no discussion of the M32 would be complete without mentioning the class’s recruitment strategy, namely its demo boat. Strictly speaking, it provides an opportunity for new sailors to try before they buy and take part in some racing. It’s also a pretty good way of roping in new sailors before they even know what hit them.

“When we ask most of our sailors why they chose the M32, they say it’s because they tried it on the demo boat and couldn’t get enough. Sailors go out on it once, and they’re hooked,” says Doucett. Phillips agrees, saying he and many others fell in love with the boat during one of these demo sails. Consider yourself warned.

2021 Season: Several events make up the year’s racing calender including, the Miami Winter Series, the European Series and the Midtown Cup, each of which comprises four weekends of racing. This year two of the European training and racing weekends have been canceled due to Covid-19 restrictions. However, much of the rest of the season remains intact. The European Championships will be held September 3-5 in Riva del Garda, Italy. They’re followed by the final weekend of racing for the Midtown Cup in Newport, September 24-26. The American fleet will then head back to Miami to be joined by the European fleet for the World Championships on November 15-21. After the 2020 World Championship were canceled, there was some concern about the 2021 season, but to the credit of the class organizers, there will still be racing. Shore activities and social events fell victim, but all things considered, it seems a small price to pay.