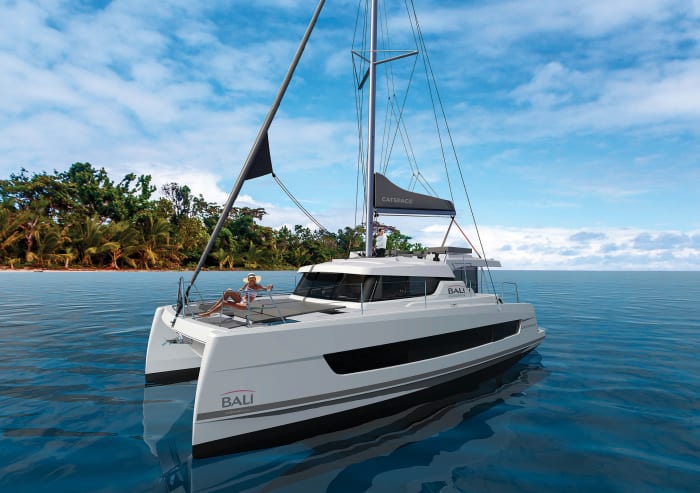 This is not a racing boat. However, if you want comfort afloat and plenty of room for your sailing friends, the aptly named Bali Catspace is the vessel for you. “Rarely,” Bali claims, “has a catamaran of this size offered so much habitable volume,” and they’re not kidding. Aft, a large “tilt-and-turn” door allows you to combine the cockpit, saloon and galley area into a single vast living space. Topside, there’s an oh-so-comfortable flybridge lounge just aft of the boat’s single wheel, while forward is yet another expansive lounging area between the two bows. Belowdecks, you have the option of an owner’s version, in which the entire port hull is given over to the master cabin, or a “Family” version with no less than four separate cabins, each with a double berth and four separate heads. Bottom line, aboard the Bali Catspace there’s room for a crowd and then some. Good times!

Although the smallest boat in the Fountaine-Pajot line of cats, the Isla 40 (which takes the place of the Lucia 40) still packs a lot of boat into its 40ft of LOA. With its dramatic reverse sheer, inverted destroyer bows and angular lines, it’s also darn good looking. A single raised helm station is located to starboard with the main traveler spanning the width of the hard dodger aft. Belowdecks there is a choice of either three or four cabins, and the saloon includes a spacious L-shaped cabin to port. There’s also a lounging area forward of the cabintrunk and a nice bench seat spanning the width of cockpit immediately forward of the boat’s dinghy davits.

The Bali 4.8 will make for a great vacation choice when on charter with its spacious forward cockpit, coachroof lounge area and the additional relaxation area created by connecting the two sugar-scoop sterns with a bench seat. A full-size refrigerator in the galley will come in handy for feeding guests—up to 12 can be seated comfortably in the saloon’s dining area. The boat comes in five layouts, including an arrangement with six cabins and six heads, almost unheard of in a boat of this size. The hull layup includes a foam core and is infused in polyester with an anti-osmotic vinylester layer below the waterline. The deck is also infused with a foam core in the interest of creating a structure that is as strong and light as possible. The raised helm station is located just forward of the coachroof lounging pad to ensure the skipper will have plenty of company up there.

The recently launched Dragonfly 40 represents a truly spectacular effort on the part of Denmarks’ Quorning Boats, both in terms of speed potential and amenities. Available in either a “Touring” version with a self-tacking jib, or a turbocharged “Ultimate” version, with an overlapping headsail, the boat features a carbon mast, a batten-car system for the main, the option of a fixed sprit and twin helms aft. The amas include a pair of deck hatches providing easy access to a wealth of storage space, and the accommodation space belowdecks in the main hull (long a Quorning specialty) looks to be both well-thought-out and comfortable, with an L-shaped galley to port and a private double cabin aft. Finally, there’s Quorning’s proprietary “Dragonfly Swing Wing” system, which allows you to deploy and retract the amas in a matter of seconds.

In teaming up on the Leopard 42, South Africa’s Robertson and Caine and Simonis & Voogd Yacht Design have created a follow-up to their successful Leopard 40 that features an attractive new angular aesthetic coupled with an additional entertainment area in the form of a coachroof lounge and larger cabins. In a nice touch, the elevated lounge can be accessed via a set of steps to port, meaning guests won’t have to intrude on the helm area to starboard. Stepped hulls help reduce wetted surface area, while blunt ends maximize sailing length. An overlapping genoa and the option of a powerful square-top main serve to keep the boat moving when things go light. The boat is also available for charter ownership through The Moorings as the Moorings 4200.

Though the smallest of Neel’s trimarans, the Neel 43 is no less impressive. As with the rest of the Neel line, it doesn’t lack for either accommodation or storage space, with eight berths (three doubles and two singles forward in each ama) and a large “garage” set low in the central hull for containing things like the engine, tanks and tools. Also like its predecessor, the 43 features what Neel calls its “cockloon,” a versatile living space that allows for free movement between the indoor and outdoor spaces, all well protected by a hardtop. The hulls and deck are constructed in a vacuum-infused composite sandwich with carbon-fiber reinforcements in high-load areas. Finally, a narrow central hull, svelte amas and a powerful rig all promise the same kind of sparkling performance Neel has long been known for.

If space to stretch out in is what you crave, look no further than Fountaine-Pajot’s new Samana 59 cruising cat, which comes complete with a truly enormous flybridge for watching the world go by. For those who want to get out of the wind, there’s also the almost 300ft2 cockpit aft or the very comfy looking saloon and forward-facing nav station. Want to get a little closer to the water without getting out of the sun? How about the lounging area forward? Belowdecks, up to six separate cabins can be had, not counting crews’ quarters. Aesthetically, despite all this lounging and accommodation space, the Samana 59’s inverted bows, reverse sheer and nicely sculpted hull windows create a look that pretty appealing as well.

The Seawind 1370 is light and nimble enough to provide outstanding performance even when loaded up for cruising. The hulls are constructed using a vinylester resin infusion laminate with a PVS foam core and a hybrid of e-glass and carbon fiber for increased strength and rigidity. Twin helms are tucked away beneath a hardtop, with sheets, reefing lines and halyards all led aft to a set of electric winches. The boat’s accommodations feature an open-concept approach, with the cockpit, galley and helms all on the same level, making socializing simple. Accommodation plans with three or four cabins are available. The boat’s self-tacking jib and high-aspect square-top main provide a nice combination of power and ease-of-use. C-Zone digital switching is available as an option, as is a high-capacity Mastervolt lithium battery system.

Designed by VPLP of America’s Cup and Vendée Globe fame, the Outremer 55 represents the latest iteration of what longtime multihull builder Outremer feels a high-performance bluewater cruising cat should look like. The boat’s narrow hulls and daggerboards, for example, ensure fast passage times, while all sail controls are led aft to the boat’s twin helm stations to ensure ease of use. In a new feature for Outremer, the helms can be tilted either inboard or outboard, providing an unobstructed view forward and of the rig when the weather is good, and the ability to get in under the boat’s bimini when it’s not. The hull and deck layup are comprised of fiberglass, carbon fiber and multiple core materials, with both vinylester and polyester used to ward off blistering and provide a combination of lightweight and rigidity—again all with an eye toward speed and seaworthiness on passage.

The latest addition to the German-built, MiniCat inflatable beach cat line, the new MiniCat 460 Elite features a carbon-fiber mast that will not only make it that much easier to put up the rig when getting ready to sail, but make it that much easier to control the boat in heavy air. Marketed in the United States by Red Beard Sailing, the boat weighs just 128lb, but can carry as many as four people. It is fully portable and can be inflated and assembled on-site in a little over a half hour. No tools are required. The hulls are fabricated from a super-tough material known as Hey-Tex and include a pair of low-aspect fin keels for directional stability. Framing is aluminum. You can even rig the boat to fly a gennaker.

Good things aren’t the only things that come in small packages. Fast things can come in small packages, too, like the inflatable Happy Cat beach cat, now marketed in the United States by Red Beard Sailing. Designed with performance in mind, the boat’s vulcanized rubber hulls (think car-tire rubber) come equipped with wave-piercing bows, while a centerboard helps with tracking, especially when sailing hard on the wind. Three different iterations are available: the 13ft 9in Happy Cat Neo: the 15ft 3in Happy Cat Evolution, and the 16ft 4in Happy Cat Hurricane, which has been clocked at speeds of over 20 knots. Assembly of all three models takes a little over a half hour, and the boats can all be easily transported to the beach or tucked away aboard the “mother ship” when cruising in either two or three bags, depending on the model.

One of the great things about even the speediest of tris is that they often offer a surprising amount of accommodation space, making them great little pocket cruisers. Case in point, the all-new Corsair 880, a foldable speedster that is as comfortable as it is quick, with standing headroom belowdecks and berths for five. So serious is Corsair about keeping people comfortable, it’s offering such options as a bimini, boom tent, 12-volt cooler, solar panels, manual or electric toilet, and even a generator and heater/AC unit! Of course, this kind of boat is also all about performance, and to this end the 880 comes equipped with a centerboard and high-aspect rig with square-top main. For those in search of yet more horsepower, a “sport” version of the boat is available, complete with an even taller rig, carbon spars and sprit, standard.

Chartering a Sailboat in Mexico!
I was Dared to POLAR PLUNGE whilst Sailing.. ( Part 4/5 )
Dora the Explorer We’re Sailing to Treasure Island Piano Tutorial
EU4 1.34 Mughals Guide – The BEST NATION For A WORLD CONQUEST
Black Friday Diving Computer Deals: Our pick of the best bargains