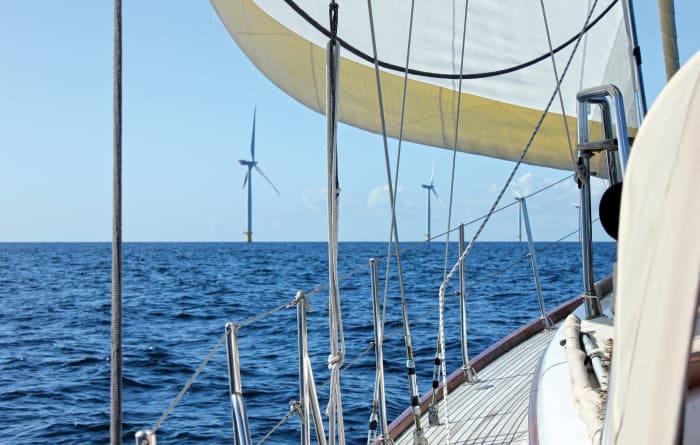 Here in Europe, the general feeling about green energy from offshore wind turbines has moved on after an initial surge of general skepticism. Concerns raised over cost, threats to seabirds, wind interference and the rest have to some extent been answered, and it’s hard to argue with the bottom line. Take the London Array as an example. This, the world’s largest offshore wind farm of 175 turbines, spreads its wings far out to sea off the Thames estuary. Its average delivery is around 1 gigawatt per day, and in a good breeze it can shove out 1.5 gigawatts, powering half a million homes across southeast England. In its first winter, it saved the equivalent of 1.3 million tons of CO2 from conventional power plants.

It’s hard to argue with figures like those. But what about the difficulties for mariners? It’s these that concern sailors. Wind farms, as they proliferate in European waters, are not always sited clear of yacht routes. So, are we allowed to sail between the turbines, and if they are a prohibited area, how are they policed? Beyond that, how physically dangerous are they to small craft? Are our masts vulnerable to being sliced off by whirling carbon blades? Can our keels snag by high-voltage underwater cables? In the end, compiling lists of political doubts and physical fears is pointless. Wind farms may not always be sited where we’d have wanted them, and sometimes they are a downright nuisance. But regardless of what we may think, more are coming, both in Europe and the United States and those that are already here are here to stay. So, what do they actually mean in terms of sailing among them?

In terms of spotting a wind farm, there can be little doubt, even at night. The turbines are well lit individually, and the corners of a typical farm are marked with conventional buoys. They can’t be missed in daylight of course. In fog, their radar target is spectacular. Internationally, they are marked on navigation charts with symbols that look exactly like what they are—tiny wind turbines. Again, pretty hard to miss.

In regards to whether it’s legal to sail within the confines of a larger wind farm, I’m afraid the answer is not as clear as we’d like. In the UK, the default position is that we can enter once a group of turbines is up and running. While it’s under construction, though, we must keep at least 500 meters away, and there are inevitably guard boats lurking in wait to shoo malefactors back out into the open. That’s usually all there is to it, although the occasional miscreant has been fined. So off to sea go the Brits, imagining that sweet reason will rule everywhere.

Not so, I fear. Just across the North Sea in the Netherlands, yachts are prohibited from entering wind-farm waters at all, unless circumstances make it absolutely necessary. Similarly, in Germany, yachts under 78ft can enter, but only in good visibility. The logic of this escapes the British mind, since ships are not allowed in, period, and in fog a moving, uncharted ship represents a far greater hazard than a static, well-lit wind turbine mast on a navigation chart. In other words, it would be hard to think of a better time to sail through a wind farm than in limited visibility, especially in an area with heavy commercial traffic. No doubt the Germans have their reasons.

The situation in the United States is similar to that in the UK. Stay clear if and when a turbine is under construction. Otherwise, you are free to sail among them—though actually tying up to a turbine is strictly forbidden. As it is with us on the other side of the Pond, the best policy is to read the latest Notice to Mariners. If still in doubt, call the local Coast Guard.

Finally, in answer to the question, how do wind farms affect the winds in their area, because of the height of the blades, their effect is surprisingly modest—far less, for example, than the downdraft from an SAR helicopter. Nor do their blades pose much of a danger to most rigs. By international convention, blade clearance is about 72ft above Mean High Water Springs, which gives most of our sticks a fighting chance. Keel clearance is also unlikely to be an issue, and if you are worried about being able to see the things, the bottom of the turbine is painted a hi-vis yellow just to make sure. All associated seabed power cables are buried, supposedly beneath any depth likely to trouble yacht anchors. It goes without saying, though, that anchoring among them is not recommended except in dire straits.

At present, there is only one major wind farm in U.S. waters, a five-turbine farm a little over 3 miles southeast of Block Island, Rhode Island, which went into service in late 2016. Other wind farms, including the proposed Cape Wind wind farm, in Nantucket Sound, Massachusetts, have been beset by legal challenges and problems with financing. However, more farms are likely on the way, with the Danish-American company Ørsted US Offshore Wind (which operates the Block Island wind farm) currently working to develop wind farms off the coasts of New Jersey, Massachusetts, Rhode Island and Delaware. For the latest on Ørsted and its plans, visit us.orsted.com.