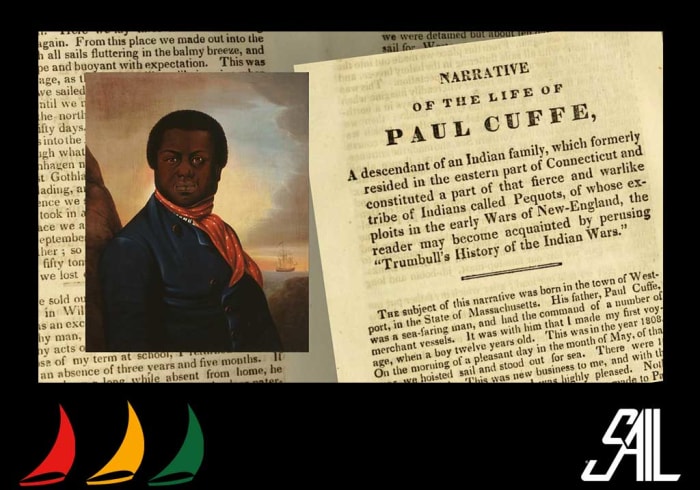 Paul Cuffe was born on Cuttyhunk Island, Massachusetts, in 1759. His mother was a Native American woman named Ruth Moses, and his father was Kofi Slocum, a formerly enslaved man from the Ashanti Empire, located in modern-day Ghana. They had 10 children including Paul.

His childhood was spent on the island where his family was employed managing the properties of the Slocum family, which lived across Buzzards Bay in Dartmouth. Though freed before Paul’s birth, Paul’s father had been given the last name “Slocum” by these enslavers. Paul refused to take their name, choosing an anglified version of his father’s name for his surname instead.

When Paul was seven years old, his family moved from Cuttyhunk to their own farm in Dartmouth. Five years later Kofi died, leaving the farm to Paul and his brother John.

In 1770, just miles up the road from Paul’s family farm, the murder of a Black sailor, Crispus Attucks, and subsequent deaths of several other civilians at the hands of British soldiers ignited the sparks that would soon blaze into the Revolutionary War. John Adams considered this event, later called the Boston Massacre, the day the “foundation of American independence was laid.”

Against the backdrop of increasing violence between the British soldiers and civilians, Paul went to sea for the first time aboard a whaling ship at just 14 years old. He would join several of these endeavors over the next years. During a 1776 voyage, he was captured and held prisoner by the British Navy, solidifying his commitment to the Revolution. After three months in jail, he was freed and devoted himself to running British blockades and delivering supplies to the inhabitants of the islands he grew up around. These secret crossings were treacherous, happening under the cover of night and at the mercy of pirates, but they allowed Paul to build lifelong relationships and partnerships with the Quakers of Nantucket.

Amidst the war Paul, his brother John and four other Black men petitioned the Massachusetts Legislature for the right to vote in 1780. The petition was initially denied, but when the new state constitution was drawn up three years later, it included their proposal. All male landowners had the right to vote, regardless of skin color.

The same year as the new constitution was written, Paul married Alice Abel Pequit, the daughter of a prominent Wampanoag family from Martha’s Vineyard, and also teamed up with his brother-in-law to found a shipping company. They acquired waterfront property and built several ships, each bigger than the last. The trade routes—initially just located in southern New England—stretched with each new ship, and soon Paul Cuffe was doing business all along the East Coast and what would become Canada, plus adding a whaling route in the Atlantic. He and his family members became captains and masters of these ships.

Paul’s wealth allowed him to support local philanthropic causes like a smallpox hospital and an integrated school. His efforts and status caught the attention of abolitionists and Quakers who hoped he’d be an ally in their efforts to help people trafficked in the slave trade return to Africa. Sierra Leone, a British territory established to send Black refugees who’d escaped slavery during the Revolutionary War, was the main destination, although it was rife with illness and conflict.

At their request, Paul Cuffe took on the task of going to Sierra Leone to assess the situation and assist with improving conditions. He made several voyages between England, the United States and Africa and even provided transport for Black families looking to leave the United States.

Unfortunately, around this time the American Colonization Society was founded with a similar mission, but ulterior motives. The leaders of the Society were sponsored by white enslavers owners who hoped to remove free Black Americans from the country by sending them “back” to Africa. The legacy of Cuffe’s work was obscured by its resemblance to the ACS’s disingenuous and xenophobic practices, even though he refused to help them and rejected their message.

By the time of his death in 1817, Cuffe was a wealthy, widely respected man of the people. His political undertakings, philanthropic endeavors and business ownership impacted many in Massachusetts and beyond.

At the beginning of the 19th Century, 20 percent of American sailors were Black. In fact, going to sea was one of the most equitable professions for Black Americans during the United States’ first centuries. During Black History Month, we’re celebrating the history and legacy of Black sailors in America by featuring a notable figure in our e-newsletter every Friday of the month.