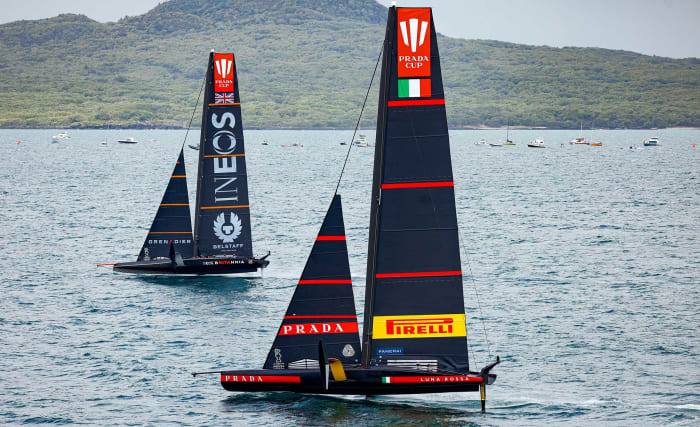 The Prada Cup finals kick off this weekend as Luna Rossa Prada Pirelli and INEOS Team UK face off for a chance at the America’s Cup. Racing is scheduled for Feb 13-22. Whichever team wins the final will go on to race Emirates Team New Zealand in the America’s Cup, beginning in early March.

Two updates to the rules have been announced ahead of this weekend’s racing. The upper wind limit will remain at 21 knots, striking an earlier rule that it would be increased to 23 knots for the final. Also, each team will be allowed to request a 15-minute delay to the start of the racing once in the series, as was the case during a portion of the round-robin section of the Prada Cup.

The Brits are a surprising favorite going into the finals. They struggled with boat speed in pre-Prada Cup races and came in last in the America’s Cup World Series, however they managed to secure a spot in the finals early on by winning the round-robin section of the Prada Cup.

The Americans had looked strong in the America’s Cup World Series but never recovered after a capsize early on in the Prada Cup. They took the remainder of the round-robin off to make repairs but were eliminated by Italy’s Luna Rossa Prada Pirelli in the semi-final. Benefitting from the bonus practice of several extra races during the semi-final, the underdog Italians hope to improve their record against INEOS Team UK. The two teams are already well acquainted with each other, as the Prada Cup has been primarily sailed between just the two of them, with “ghost” races replacing those that would have been against American Magic.

For more, go to americascup.com.