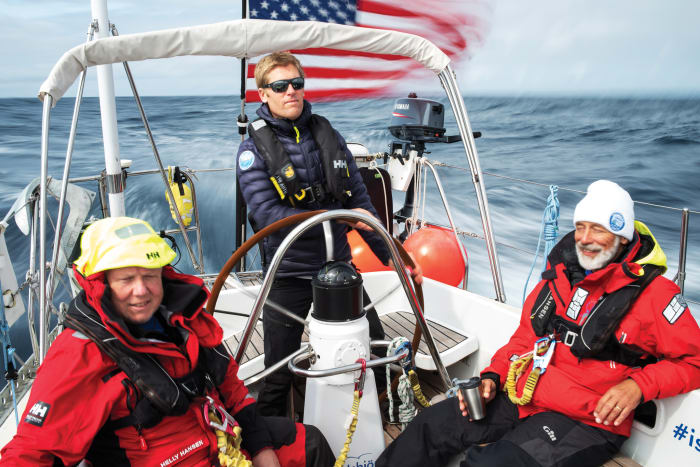 Offshore racing sailors will always find the fastest route. That is, after all, the whole point of the exercise. Often that means sailing the rhumb line, i.e., the shortest, most direct course between the start and finish. Sometimes, though, they’ll also take “fliers,” sailing a longer distance, at the same time gambling on the weather or wind angles to get them to their destination that much faster.

During the 2008-09 Volvo Ocean Race, Ericsson 3, skippered by my hero Magnus Olsson, took one such flier as it was approaching Cape Horn on its way to Brazil. The navigator, Aksel Magdahl, saw an opportunity to break with the rest of the fleet and sail right through the center of a low-pressure system. If they could punch through, the wind on the other side would offer not only more favorable angles but faster boatspeeds—a passing lane, so to speak. Despite Ericsson 3 having missed the start in China due to damage sustained during the previous leg, they both caught and passed the entire rest of the fleet with that move. The team went on to hold on to its lead and eventually win what remains the longest leg ever of the Volvo/Whitbread Race (now The Ocean Race). Arriving victorious in Brazil was—in my opinion, at least—Olsson’s finest moment.

Cruisers, of course, aren’t usually interested in pulling out all the stops just to make the fastest passage possible. We’re built for comfort. That said, most routing software is by default configured to find the fastest route. So we sometimes have to intervene. The quickest way to do this is by adjusting the parameters employed by the software to find the optimal route—things like max wind speed, and max upwind sailing angles. Adjust the parameters to your preferences and, boom, out pops the fastest route within those limitations.

Unfortunately, using this approach it can also be easy to miss the forest for the trees by blindly following the computer’s advice and not thinking for yourself. To rectify this situation, I, therefore, like to start out by overlaying the rhumb line for wherever I’m bound onto a GRIB forecast and then look at the big picture. Where are the lows? Where are the highs? How are they interacting and evolving? What kind of certainty can I expect from my forecast? Can I trust it for the next five days, or only three? If the forecast were to change, what would the worst-case scenario be? In short, I do my own routing and then let the computer and do its thing. My route and the computer’s should be similar. If not, it’s time to give the situation a closer look.

I almost always prioritize wind angles on our passages. There is a huge difference between sailing at 60 and 40 degrees apparent—slightly cracked off versus close-hauled. The boat doesn’t heel as much, she’s faster, and the overall motion is much easier on the crew. There’s less pounding through the waves, and it’s easier to steer. I get more sleep.

Sometimes this is impossible, but on passages where the weather changes and evolves, it’s almost always beneficial to take the better wind angle and wait for the weather to change, even if it means going out of the way.

On a recent passage south from Iceland, our Swan 48, Isbjörn, had to sail 750 miles in a volatile part of the Atlantic during a volatile time of year. Following a 24-hour calm, there were two low’s forecast to cross the rhumb line. I looked closely at the GRIBs. If we went east, letting the first low slide past to our south and then tacking at just the right moment, we could get in front of the second, stronger low and ride the last half of the passage with fair winds out of the west-northwest. It was a squeeze play and added some miles to the trip.

“Weather-routing plan working to perfection,” I wrote in the log a few days later, after a 36-hour beat in 20-25 knots of wind got us to where the breeze briefly died before quickly filling in from the west. The home stretch consisted of a sleigh ride all the way to our destination. Don’t think I didn’t feel a little bit like Magnus Olsson in that moment.

Andy Schell is a veteran delivery captain and co-owner, with his wife, Mia Karlsson, of the adventure-charter company 59 North, which specializes in providing sail-training and offshore passagemaking opportunities. Visit 59-north.com for more information. Look for more from Andy on weather-routing strategies in the March issue of SAIL