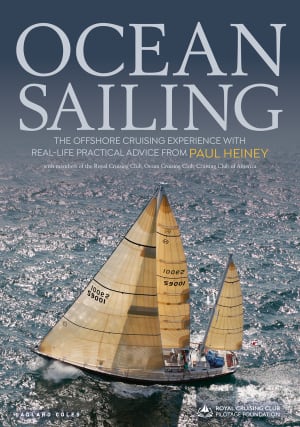 As we were preparing for our first significant offshore passage in 2013, I read every book on ocean sailing I could find. However, while there were a number of helpful books full of technical information, I also longed for the personal stories of those who had gone before us. I spoke to as many people as I could, but living in Toronto, Canada, offshore sailors were few and far between. Only when I opened up Ocean Sailing by Paul Heiney a few weeks ago, did I realize I’d finally found the book I had been looking for.

In Ocean Sailing, Heiney sets out to provide practical advice about the realities of ocean sailing. With many anecdotes and stories from cruisers with extensive bluewater experience (including members of the Royal Ocean Cruising Club, the Ocean Club and the Cruising Club of America), he covers all the topics most sailors wonder or worry about before a significant voyage. The book opens with a review of the world’s great ocean passages, with details and personal stories from cruisers who have sailed them. Next, he discusses the pros and cons of various different boat designs, at the same time sharing a number of sailors’ stories about what they chose and why it was (or wasn’t) right for them in the end.

Other sections include an analysis of the costs of full-time cruising; the positive effects of voyaging with children; the question of old age and passagemaking (“providing you feel like it, and you’re fit enough for it, there is no reason why age is any barrier to successful ocean sailing”); and practical tips on everything from communications to general physical wellbeing.

The author concludes with a topic that isn’t often discussed—what it’s like when the adventure is over, and you are back at the dock. The poignant accounts of returning to life on land will be familiar to those who have experienced the end of a similar adventure. Our own return was heavy with emotion and a sense of loss of freedom. But as Heiney says, this same sadness is tempered by an appreciation for the life-changing adventure you’ve just had, which is the “tricky bit because, without the slightest shadow of doubt, you will want to do it all over again.”

Ultimately, Ocean Sailing recognizes there is no one way to cross oceans—it is as individual as it gets. As you read through the book’s many firsthand accounts, you also feel as though you are sitting in a cockpit sharing a sundowner with friends, exchanging ideas and experiences. If you take a little from each story, you will find yourself well-armed with ideas and that much closer to your dream of crossing oceans.

Published by the RCC Pilotage Foundation and Adlard Coles Nautical, an imprint of Bloomsbury Publishing: $35, bloomsbury.com