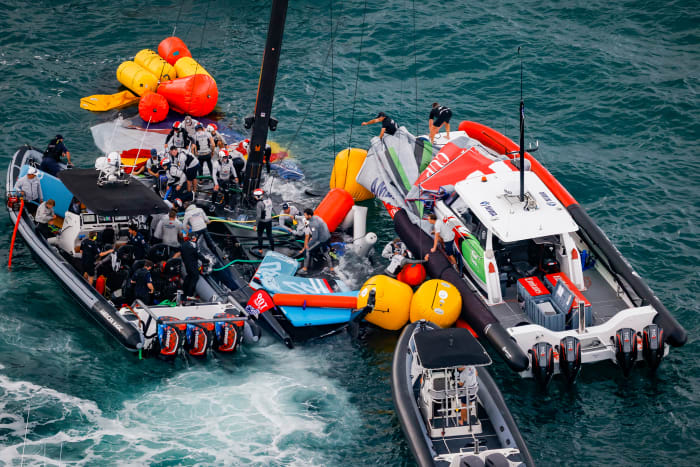 American Magic’s Patriot capsized during day three of the Prada Cup. If you haven’t yet watched the catastrophe unfold with your own eyes, check out the above video or any number of others that are circulating on social media. It’s truly a tip that has to be seen to be believed. “We got a puff at about the same time we were bearing off, and we were accelerating,” reported skipper and executive director Terry Hutchinson. “In that exact moment, the runner was a little bit fetched up on the mainsail, the sails were eased, and the boat was accelerating but we were still building up to our top speed. Those are the unfortunate consequences of racing in an incredibly turbulent condition,”

An international effort including local authorities and support from other teams immediately descended upon the stricken boat to rescue crew and prevent it from sinking. “At the time, it felt like the boat was going to sink,” Hutchinson recalled. “We were doing everything we possibly could to prevent that from happening. Everybody around us, from the other teams to the local authorities helped us get the pumps in the boat, and we ended up with 16 pumps inside the boat. We had a jib wrapped around the hole. And then the fire and rescue [units] deployed what I would categorize as two ‘airplane-style’ life rafts that we wrapped underneath the bow of the boat and inflated. That really that stopped the bleeding, from that moment on.”

Work is now underway to repair Patriot, and both resources and expertise from Emirates Team New Zealand have been offered to help with the effort. Patriot is not expected to be able to compete in the remainder of the round robin section of the Prada Cup, scheduled for January 22-24; however, due to the two-part scoring format, this doesn’t necessarily mean the end of the road for the Americans. The winner of the round robin earns a spot in the finals, but the second and third place teams still must face off in a semi-final round for the other spot. If American Magic can get the boat repaired in time for the first race of the semi-finals (January 29- February 2) they still have a shot at winning the Prada Cup and advancing on to the America’s Cup.

The Ocean Race: All set for leg two
Brand New Blender Addons You Probably Missed! – #18
Close Encounters: A Star to Steer By
Guide to Export Spices from India | Amazon Global Selling
245. Narrowboat novices! The process of hiring a canal boat