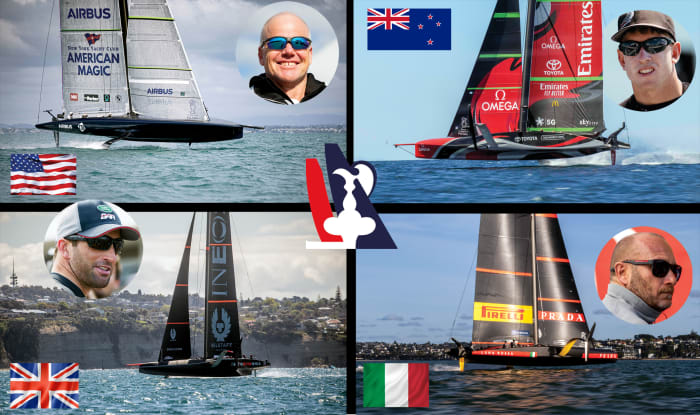 Though pulling off an event like the America’s Cup during a global pandemic was never going to be easy, the Kiwis also (inevitably?) found themselves having to contend with the latest in the long line of America’s Cup scandals, which only further complicated things. Specifically, in June of 2020, Emirates Team New Zealand announced a handful of “spies” had infiltrated its base. Worse yet, as more information came to light it became increasingly unclear whether this had truly been a security breach, or was merely whistleblowers bringing to light legitimate concerns about the potential mishandling of public funds. (The team was eventually cleared of any wrongdoing.) After that came ETNZ’s choice of courses, one of which was contested by the Challenger of Record, Luna Rossa Prada Pirelli Team, for giving the home team an unfair advantage. An inshore course was ultimately disallowed.

Team CEO Grant Dalton earned his bones distance racing, competing in no less than five Whitbread/Volvo Ocean Race campaigns. But this hasn’t prevented him from recruiting yet another a host of short-course superstars. Among them is the Kiwi duo of helmsman Peter Burling and crew Blair Tuke, who over the years have made a name for themselves with numerous Olympic and world championship wins in the 49er class, a 2017 America’s Cup victory and a pair of Volvo Ocean Race campaigns (aboard separate boats). Other team standouts include Australian Olympic medalist and 10-time A-class world champion Glenn Ashby, who was part of the team’s winning 2017 effort; and longtime America’s Cup and Volvo Ocean Race sailor Ray Davies, Burling’s backup driver in Bermuda.

“The designers and boatbuilders have done their jobs, now it is time for the sailing team to do ours. The pressure is on for sure, but that’s where we are most comfortable, so we can’t wait to race.”

There is never a shortage of drama in the America’s Cup, and for Luna Rossa it came in the form of the team’s absence from the 2017 Cup. Despite a 2014 decision that specified the 2017 Cup would be sailed in 62ft catamarans, a year later the teams voted to shrink the scale to 45-50ft, which not only led to Luna Rossa’s withdrawal from the proceedings but some bad blood between it, Emirates Team New Zealand and the rest of the fleet. Still, Luna Rossa was more than ready to jump right back into the action afterward as the “Challenge of Record” for the current Cup cycle.

The Italian team’s base is located in Cagliari, a city in the south of Sardegna, and was constructed with the team principles of collaboration and communication in mind. All employees work on-site, and the team has gone out of its way to create a culture of “no unbreakable walls or unapproachable leaders.” From the sailors to the designers to the shore team, constant and open dialogue is central to what the team hopes will be its winning strategy.

Team Principal Patrizio Bertelli is the chairman of the current Luna Rossa Prada Pirelli Team and a long-time presence in the world of Cup sailing. (In 2012, he became the first Italian inducted into the America’s Cup Hall of Fame.) Complementing Bertelli is team director Max Sirena, reprising the position he held during the 2013 Cup in San Francisco, and two-time Australian America’s Cup winner Jimmy Spithill, architect of Oracle Team USA’s epic “comeback” on San Francisco Bay in 2013.

“It must be clear to everyone that every single activity of each individual person affects the final result. A badly made splice or the wrong post on a social network can have negative consequences on the entire group and also on the final result.”

The host country of the original America’s Cup hasn’t been able to bring the “Auld Mug” back home in 170 years of trying. However, that may very well soon change. Britain’s INEOS Team UK has been spearheaded from the get-go by Sir Ben Ainslie, who has made a British victory his primary mission since helping to win the Cup for Oracle Team USA as its backup tactician in 2013. As far back as 2012, Ainslie, who among other accomplishments is the most successful Olympic sailor of all time, with a silver and four golds, formed an organization called Ben Ainslie Racing to prepare for the event. The team then raced in several AC45 series over the years, before finally landing the London-based chemical company INEOS as its main sponsor in 2018.

Because the 2020-21 America’s Cup has strict regulations requiring that the boats to built in their home country, INEOS Team UK created two bases—a custom-built facility in Auckland and a 74,000ft2 construction, development and training complex in Old Portsmouth, England. The latter’s hangar doors, decked out with a Union Jack, have become an almost iconic fixture of the Portsmouth waterfront.

In addition to Ainslie, INEOS Team UK includes Ainslie’s fellow Olympic Gold medalist Giles Scott as tactician; Australian two-time Olympic medalist Iain Jensen, who spent the last two Cup cycles as wing-trimmer with Sweden’s Artemis; and longtime British sailor Nick Hutton. In all the team has 16 America’s Cup wins and eight Olympic medals to its credit. Nothing would please these guys more than putting another notch in their collective belts.

“The America’s Cup is a magnificent competition with an extraordinary history, and now I believe that for one of the first times in British history we are going to arrive at the start line with a truly competitive boat.”

After a devastating 7-1 defeat to Emirates Team New Zealand in Bermuda in 2017, American sailors found themselves at something of a crossroads as billionaire Larry Ellison, who’d footed the bill the previous five campaigns, decided to get out of the game. Fortunately, Bella Mente Racing, Quantum Racing and the New York Yacht Club decided soon afterward to pick up the baton and create a brand-new challenge dubbed “American Magic.” An effort steeped in history, a victory for the team would not only return the America’s Cup to the United States, but its “home waters” after years of Cup racing and U.S. victories in San Diego and San Francisco Bay following Australia II’s victory over the New York YC in 1983. As evidence of what’s motivating the effort, the team name is a reference to the first winner of the America’s Cup (America in 1851) and the first Defender (Magic in 1870).

Leading the American Magic effort as executive director is four-time America’s Cup competitor and TP52 champion Terry Hutchinson. Other standouts among the squad include British Laser-class Olympic gold medalist Paul Goodison trimming main, and “flight-controller” Andrew Campbell, a 2017 Cup veteran who also represented the United States in the Laser class at the 2008 Olympics. Then there’s American Magic’s helmsman, Dean Barker, a Cup sailor in 2000, 2003, 2007 and 2013—where he was on the losing end of the “comeback.” Always a bridesmaid, never a bride, he has yet to win or successfully defend the Cup as a starting helmsman. You can bet there isn’t a sailor out there hungrier for a victory than this one.

“If you can inspire younger sailors, and demonstrate that hard work is worth it, it’s hard not to feel the significance of that. That side of it is pretty inspiring. It can have a meaningful impact on the next 50 years of our sport”