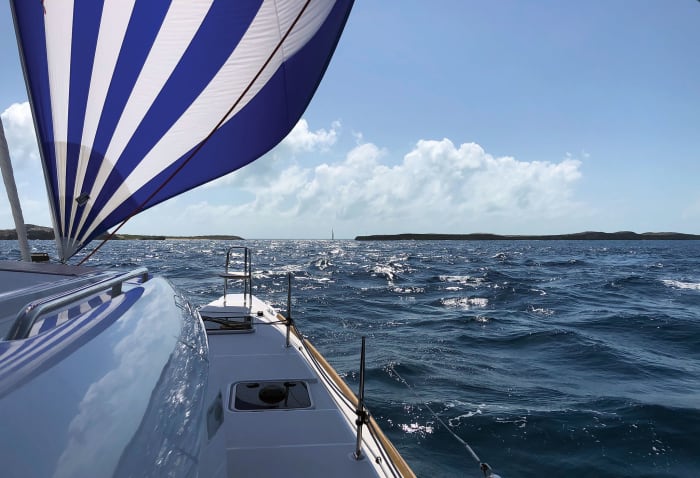 Growing up on the coast of northern England, I dreamed about crossing oceans on my own boat. Like most of us, though, education, a family and a career took precedence, and before I knew it, we had mortgages, young children and endless work obligations. We also became landlocked, living and working in Atlanta, Georgia. It wasn’t until 2013 that my wife, Janet, and I decided to take a sabbatical and go cruising to the Bahamas on our Hunter 42 Passage sloop. After that we were hooked, moving to the northern coast of the Gulf of Mexico and setting about a plan to retire early. Part-time cruising was our new dream.

Having now reached our 50s, we also decided we had one more sailboat left in us, and with hopes of one day having grandchildren, a catamaran was clearly the way to go due to its stability, ease of access and sheer space. After researching the many options in the 40-45ft range, the French-built Lagoon 40 became our choice, based on its combination of build quality, safety, comfort, price and size. Because the overall cost of the boat would be significantly reduced if we excluded the cost of delivery from France to the United States, I began thinking, why not sail it home from France and make an adventure out of the experience? Although we had never undertaken a sailing trip of this magnitude before, we had completed numerous ocean passages aboard our Hunter to places like the Bahamas, Mexico and Cuba. I was both amazed and elated when Janet agreed this should be our plan as well!

On Our Way Home

We took delivery of our new Lagoon 40, Midnight Sun III, in La Rochelle, France, in December. This was almost two months later than originally promised and not the best time to be crossing the Bay of Biscay. However, we wanted to be on our way, so we had to take what we could get. Due to weather and commissioning delays, we had very little time for sea trials, and with the weather outlook worsening, we left La Rochelle on December 18. Conditions on Biscay were the worst of the entire journey, with seas up to 25ft and winds 30 knots or more, but the boat handled it all extremely well.

Our journey took us from La Rochelle to northern Spain, around Finistère, then south along the coast of Portugal. After that we headed to Madeira, the Canary Islands, Cape Verde and across the Atlantic to Antigua. From there we sailed to St. Marten, the BVI, the USVI, Puerto Rico, the Dominican Republic, the Bahamas and then around Florida to our home near Pensacola.

It seems like a long journey, but we took it “one day at a time” and ended up having an amazing experience. Some of our favorite stops included Tenerife, and Funchal, Madeira. Most of the journey consisted of a series of simple day trips, though we also completed several legs that lasting anywhere from three to five days. The Atlantic crossing was, of course, longer still. We elected to cross from Cape Verde to Antigua, taking advantage of the trade winds. Our Atlantic crossing of almost 2,200 miles took a little over 14 days in all.

For the most part, the boat worked flawlessly. As with any new boat, we had a few warranty issues (a leaking window being perhaps the most significant), but these have now all been addressed. While a window leak may seem minor, it quickly became a significant issue in the bad weather we encountered on the Bay of Biscay. Fortunately, we were able to make a temporary fix with plumber’s putty. It wasn’t pretty, but it was effective. It took several attempts in first France, then Portugal and the BVI before the leak was finally traced and repaired for good.

We also had some chafe issues with the boat’s single-line reefing system but were able to modify this underway with the addition of some blocks, and this seems to have solved the problem. Finally, our AIS and VHF developed some problems midway across the Atlantic. This turned out to be a factory installation issue, which resulted in having to replace the AIS unit and VHF splitter when we arrived in the BVI.

Planning for the delivery was critical and included carefully evaluating what factory options to purchase (most options for our Lagoon came as part of a “package”); deciding whether we wanted any custom upgrades, and deciding what equipment to buy locally as opposed to having it shipped from the United States. There were also, of course, the questions of route planning, weather routing and crew logistics that also needed working out.

Several good friends and our son, Austin, volunteered to crew for either the entire trip or a few legs. We were fortunate that all our crew were not only experienced sailors from the Pensacola area, but had also, for the most part, completed a US Sailing Safety-at-Sea course at some point—a course I would recommend for all.

With us for the entire trip were our best friends, Larry and Tracy Cost, while another good friend, Mike Beard, served as crew for the initial leg, and Austin and friends Ronald Bray and Julie Denton joined us for the trip across the Atlantic. Again, we were lucky to have skilled crew throughout, which allowed us to stand watches with at least two people per watch, and for no more than three or four hours per watch. This worked extremely well.

In terms of factory options, I carefully studied what items came in the various upgrade packages and generally made my selections based on value and practicality. For example, I decided twin folding props and gel batteries were preferable to Corian, synthetic teak and leather trim upgrades in the accommodation areas. We also elected not to go with the factory watermaker, but to ship our previously purchased and cruise-tested Rainman unit instead. (I had some additional through-hulls installed during commissioning to allow us to plumb in the Rainman more easily.) Similarly, we ordered the factory bowsprit and Code 0 hardware but had the actual sail made by Schurr Sails of Pensacola. These decisions resulted in significant cost savings but meant having to ship a full pallet of equipment from the United States to France. This was OK, though, because it also provided a means of shipping other bulky items, like foulweather gear, linens, a liferaft, a step-down transformer and a small inflatable. That said, a word of caution: while I believe shipping the pallet of equipment was a good decision, dealing with the nuts and bolts of shipping and releasing the gear from French customs did prove to be a significant logistical and administrative challenge.

When planning our route, I started out by carefully studying the Imray #100 North Atlantic Ocean Passage Chart, including all the wind and current information it contains. Based on what I found there, I decided that crossing the Atlantic from Cape Verde would likely put us in a better position for the trade winds when compared to starting out from the Canary Islands. As an added benefit, this would also give us another interesting place to visit.

Once the general route had been decided, I spent many hours researching the ports we planned to visit along the way, using such resources as Reeds Nautical Almanac, various cruising guides, personal blogs and Google searches. I then assembled a detailed spreadsheet with best-case and worst-case dates. While this was intended as a planning tool with flexibility to change, it proved to be invaluable during our trip. To make sure we were all on the same page, so to speak, I provided this same spreadsheet to all crew members well in advance of our departure dates, so they would fully understand how much time the trip might take. I have been told many times by experienced sailors that the most dangerous thing when voyaging is a fixed schedule. Truer words have never been said!

Where possible and practical, we tried to build in redundancy in terms of critical equipment and spares. In the case of navigation, this is easy, as most cell phones and iPads now have built-in GPS capability. Similarly, for communications, we had the boat’s fixed VHF, two handheld VHFs, an Iridium Go satellite phone and a pair of inReach trackers, providing satellite text capability. Our spare parts list included a variety of shackles, blocks, fittings, spare line, impellers, belts, filters, and oil and fluids, in addition to such basic “jury-rigging” items as duct tape, rescue tape, zip ties, Dynema, screws, nuts and bolts, and of course, a comprehensive tool kit.

As we had up to seven people on board at a time, and since the freshwater capacity of the boat is a meager 85 gallons, a reliable and simple watermaker was a critical piece of equipment we used on a daily basis. I have owned our Rainman for three years and found that in addition to its high output, it’s both reliable and easy to use. It also provides an additional level of operational flexibility in that we can power it using either the generator or inverter. We flew our Code 0 most of the way across the Atlantic crossing, and with the help of the trades, it allowed us to maintain a steady and consistent speed throughout the passage.

After leaving La Rochelle in December, we arrived in Pensacola in April after sailing a total distance of 7,100 miles. It really was the trip of a lifetime, and we remain extremely happy with our decision to go with the Lagoon 40. We are also thankful for our fantastic crew of friends and our various other friends who provided shore support. While I believe the entire crew was a bit apprehensive about the Atlantic crossing, we were fortunate enough to have generally great weather, and it was a truly enjoyable and unforgettable experience.

Ed Note: For more on the author’s trip, as well as his previous and subsequent adventures, visit midnightsunii.blogspot.com and sailingmidnightsun.com