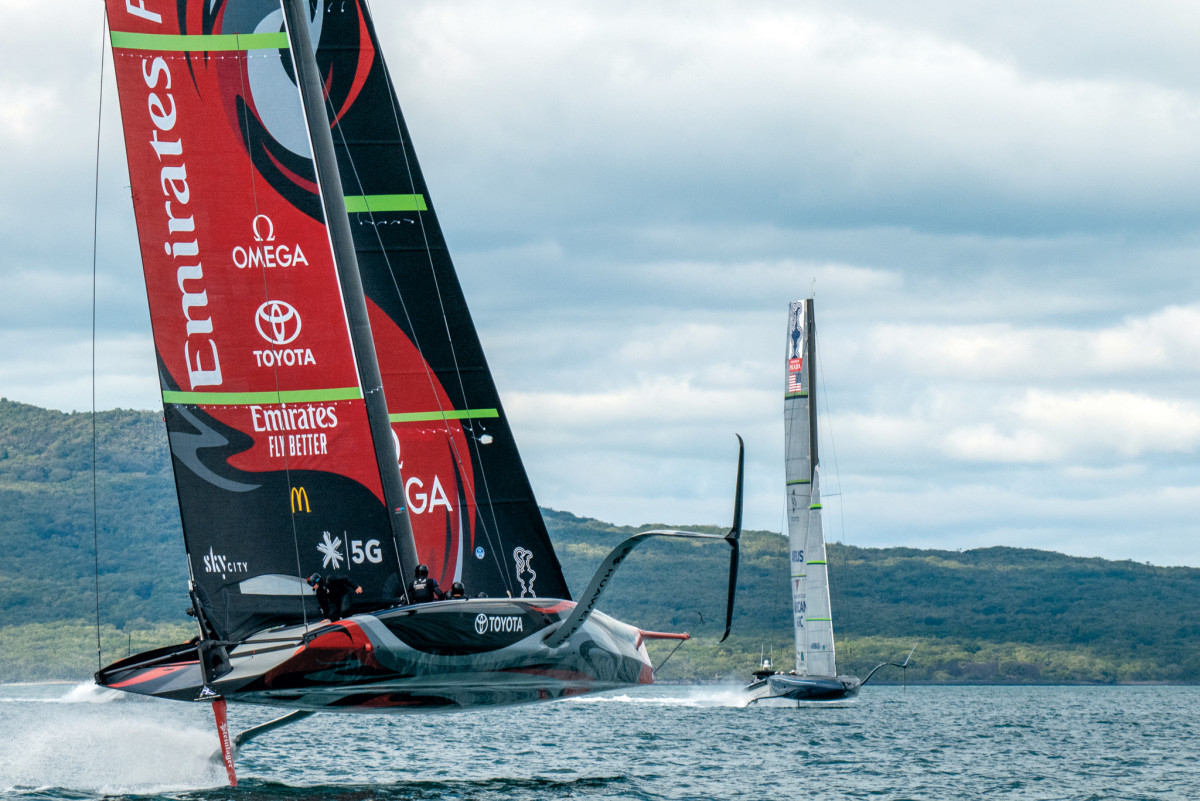 A Superbowl is a Superbowl, and a World Series is a World Series. Sure, the names of the players and the teams change from year-to-year, but otherwise, the game pretty much remains the same.

Not so the America’s Cup. Still, in many ways a hot mess left over from the days of Queen Victoria, the Cup achieved a measure of stability during the 12-Metre and IACC monohull eras. But following the 2010 “Deed of Gift” regatta between BMW Oracle Racing’s 90ft trimaran and the Société Nautique de Genève’s equally massive catamaran, Alinghi 5, it’s been anything goes.

The 34th America’s Cup, which took place on San Francisco Bay in 2013, featured a fleet of 72ft wing-sailed catamarans that were never supposed to fly, but ended up doing so anyway. After that came the 35th America’s Cup in Bermuda aboard a fleet of 50-footers that were supposed to fly—and did so quite well. The twist? The same bunch of Kiwis that had figured out how to get an AC72 airborne—rules be damned—suddenly developed a penchant for bicycling of all things. Now the Cup again finds itself featuring cutting-edge monohulls.

Imagine playing the World Series using wiffle balls one year, cricket bats the next. Pity the poor America’s Cup sailor, or the equally frazzled designers and builders who find themselves having to come up with an all-new fleet of boats to sail year after year.

Further complicating things this time around has, of course, been the pandemic. By this time Cup fans and—equally important—the campaigns themselves were supposed to have been able to see the new AC75 full-foiling monohulls in an actual race setting on not one but two separate occasions—first in Sardinia, then in the UK—as part of the 36th America’s Cup’s own “World Series.”

This, of course, never happened, which means the teams have been flying blind in terms of having to figure out everything from the right balance of maneuverability versus straight-line boatspeed to how best to handle things like starts and mark roundings. At press time, the third and final World Series event in Auckland was still a couple of weeks away. One can only assume that with scarcely a month between it and the beginning of the Prada Cup challenger series in January, we’ll be seeing some very busy designers, boatbuilders and sailors afterward.

The good news for Cup fans is that the result of all this craziness will (hopefully) be a truly memorable Cup. First and foremost, the boats themselves couldn’t be more spectacular. How exactly, the Defender, Emirates Team New Zealand, will fend off challengers American Magic, INEOS Team UK and Luna Rossa Prada Pirelli, remains to be seen. For now, though, the new AC75 class—with its otherworldly foils, towering rigs and equally out-of-this-world boatspeed—is straight out of central casting.

Same thing with the personalities tasked with manhandling these beasts around the racetrack. On the one hand, you’ve got ETNZ, chock full of such stars as young sailing legend Peter Burling. On the other, you’ve got American Magic skipper Dean Barker, always a bridesmaid but never a bride when it comes to the America’s Cup finals; INEOS Team UK’s helmsman, Sir Ben Ainslie, the winningest sailor in Olympic history; and Luna Rossa Prada Pirelli’s Aussie helmsman Jimmy Spithill in search yet another AC win.

Finally, there’s the wonderful sense of mystery surrounding the start of this year’s Cup. Back in the day, after terms had been set, the challenging boat would come lumbering over the horizon, the two teams would do their best to get their boats into fighting trim and racing would begin. Think the iconic schooner America taking the British yachting world by storm in the race around the Isle of Wight back in 1851 that started it all.

Same thing in 2021. Again, there will have been no actual racing until pretty much the last minute. Nor has there been any of the intra-squad “trial horse” racing that was such a big part of Cups past. Instead, the teams have been forced to launch their four (very different) second-generation boats within a couple of months of the start of actual racing and then do everything they can to get them up to speed before the first gun—let the best team win. I, for one, can hardly wait to see what happens!

The Teams of the 36th America’s Cup

FULL TOUR of our Completely TRANSFORMED $100 Boat | 1978 DeFever 43′ Trawler
245. Narrowboat novices! The process of hiring a canal boat
SAILING FASHION: What to pack for an offshore sailing trip + GILL offshore jacket GIVEAWAY 🎉
The Ocean Race: All set for leg two
Pink isn’t for everyone, but I love it in my office! #officemakeover #pinkwalls #officedecor #home