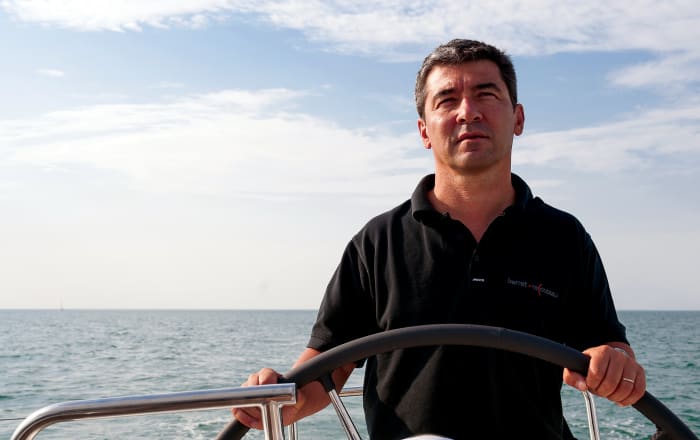 Fresh from the 2020 Düsseldorf boat show where one of his boats won a number of major awards, you might have expected French naval architect Olivier Racoupeau to be taking a break. But when I catch up with him by phone, he sounds breathless and concerned about his next deadline, no great surprise given the wages of success in this industry are more work.

In fact, yet another one of the larger fruits of that success had just been unveiled at the Düsseldorf show in concept form—the SWCAT90 from South Africa’s Southern Wind, 90ft of customizable carbon-fiber sandwich offering a generous 2,228ft2 of deck space and 1,840ft2 internally. In creating the cutting-edge design, Racoupeau and the La Rochelle-based Berret Racoupeau design office of which he is the head, had not only drawn a pair of sleek wave-piercing hulls, but also specced high-efficiency curved daggerboards for stability and windward performance along with T-rudders to minimize pitching.

“The design is based on our latest shapes in terms of efficiency by combining a maximum waterline length, moderate waterline beam and reduced wetted surface to strike the right balance between performance and interior volume,” Racoupeau says. “Two sailplan options have been developed to appeal to the varying expectations of potential owners. While a cruising-oriented owner may prefer a fixed mast, the performance enthusiast may choose a larger sailplan with a rotating rig.”

Impressive stuff—all the more so, as it comes hot on the heels of an even bigger collaboration with Royal Huisman in the Netherlands, for which Racoupeau has designed a 119ft custom cat available in both sailing and power variants. With cabins for 10 guests and five crew, the boat has all the features you’d expect to see in a superyacht, including a true flybridge, onboard Jacuzzi and loft-style interior.

“We met, we talked and we were all saying the same thing,” says Racoupeau of the various elements comprising the boat’s design. While on the subject, he notes he is not the only one out there seeing the potential for superyachts with more than one hull, with several other designers in this rarified world also reporting an increase in enquiries.

“There are very few multihulls in the superyacht world, but that could easily change,” confirms Huisman CEO Jan Timmerman.

The design office that bears Racoupeau’s name was originally established by his erstwhile partner Jean Berret, who was already a noted designer of fast IOR boats and Beneteaus by the time a then-young Olivier Racoupeau joined the team in 1983.

“I arrived very young as an employee at his place,” Racoupeau says, adding that in all his years it’s the only office for which he’s ever worked. “He was able to pass on to me immediately his knowledge and his own vision, especially on aesthetics and function—he had an incredible sensitivity on these points. I had a scientific background, while he, as a designer, was more intuitive. We quickly became very complementary.”

In fact, Racoupeau was originally trained in aeronautics and aerospace as there wasn’t a local training program for yacht design. The resulting education, however, put him in good stead with respect to his chosen profession. “The technologies seemed similar enough to allow me to branch out into naval architecture and design,” he remembers, “and it worked.”

This is indisputable, as he was soon putting his newly won knowledge to use creating a series of winning raceboats. Soon after Berret’s arrival, the studio’s monohulls won the 1985 Admiral’s Cup, the BOC Challenge and three Mini Transats. “I naturally became part of the crew of [some of] these boats,” recalls Racoupeau with gusto. “All these prototypes were, at that time, very popular—half-tonners and one-tonners mainly. The fleets were of very good levels and allowed me to participate in many international regattas. It was a very exciting time. It allowed me to sail a lot, at a high level and on very different boats.”

Racoupeau also found himself working with Beneteau, which had been attracted Berret’s office by his success on the regatta circuit. “Since the First 35, we have always had projects in progress with Beneteau,” he says. “On some projects, part of our team moves into the design office in the weeks before the project is finalized. Beneteau is the only client we work within this way, and there is a very strong collaboration between teams.”

Racoupeau first steps into multihull design came in 1991 when Fountaine-Pajot commissioned its new 56ft Marquises from Berret. The boat is still well-regarded in the brokerage market, with very fine hulls and a good turn of speed. “It was our first catamaran, and at that time it was really big!” says Racoupeau. “I was involved in the naval architecture and structural part rather than the general design and style. The office was very small at the time. There were only three of us. Jean did the rest.”

As a side note, he remembers how boats were a lot more Spartan back then, more focused on lightness. “Today’s vision, even though we pay a lot of attention to performance where comfort and lifestyle are often central, did not exist in this form,” he says. “Today’s catamarans would have been very difficult to sell at the time!”

Eventually, in 1994 Racoupeau officially got his name on the door with the formation of Berret-Racoupeau. Jean Berret then retired in 2007, leaving Racoupeau in charge with 13 employees around him, including his wife, Isabelle, who heads up the interior design division. “It has never been difficult for us,” he says of literally being married to his work. “We share the same passion, but we don’t work on the same interests. When there are choices, arbitrations, we trust each other. I must be honest, it’s clear that it often overflows at home as well, like any passion, but we have many other interests as well.”

With Racoupeau’s reputation as a catamaran designer firmly cemented, it might come as a surprise that the yacht to bag him a 2020 European Yacht of the Year Award back in January was a monohull—the much-lauded Amel 60. Here his team designed both the interior and the exterior, a capability that sets Berret-Racoupeau apart from many of its competitors. “The management of naval architecture and interior design within the same firm has facilitated exchanges and helped to optimize all functions,” Racoupeau explains.

Nonetheless, after years of languishing behind the market for “normal boats,” so to speak, Racoupeau says he now firmly believes the multihull sector has truly taken the lead in terms of dynamism. “The multihull market is now mature, I think, and the market for monohulls needs more innovation to excite more people. We are talking a lot about cats because it’s a good answer, but it’s not the only solution. We have to make the monohull more fun, more easy-sailing and more exciting.”

As an example, of the fun, simplicity and excitement he is talking about, Racoupeau points to the Fountaine-Pajot Elba 45, one of the more recent of his and Fountaine-Pajot’s many collaborations. Thanks to small chines aft and a remodeled transom, the boat’s hulls offer 10 percent less drag than its 44ft predecessor, which in turn results in better performance at medium to high speeds and more efficient motoring, all that in a 6in longer and 6in beamier hull. “For us, that’s a big deal,” Racoupeau says,

The boat also carries a shorter, more powerful rig with a low center of effort in combination with 100ft2 of lounging space atop the boat’s “flybridge” and yet more sunbathing room around the edges of the cockpit below. To further maximize the amount of living space aboard the boat, Racoupeau took a bold step of marginalizing the chart table as well, thereby creating that much more galley and social space in the saloon.

“We have introduced the concept of the meridienne—a place where people can have a drink, read something on the iPad, lounge in a chair,” he explained during a recent test sail.

Another example of this focus on faster hulls and greater interior volume can be found aboard the new Fountaine-Pajot Samana 59. The aim is to inspire “social unity,” says Racoupeau, and embody the “French way of life” afloat. To this end, the cockpit alone encompasses nearly 300ft2 of living space, with the fly-bridge adding a 325ft2 more.

Beyond that, Racoupeau says he thrives on the challenge of pivoting between such radically different companies as Amel, Royal Huisman and Fountaine-Pajot and the contracting demands that entail. “We like to work on really different projects. When we work on a one-off, for example, it is totally different to production. We are now working on performance monohulls, large cats, production cats and with Royal Huisman. What we like is to switch from one to the other.”

“All the projects require a mix of what the client wants and what we say, a convergence of ideas,” he explains. “Shipyards want to keep the boats easy to produce because they need to be industrially efficient. The best product is the one that fits with what they want and what we like.”

Despite his racing origins, Racoupeau says these days he prefers to cruise, though he still enjoys boats with some get-up-and-go. “Personally, I like mid-sized boats around 65ft,” he says. “My wife and I own a 50ft fast cruiser. It’s a good time to get the family on board.”

Like many designers, he is also grappling with the industry-wide problem that boats are quite carbon-intensive, both in terms of their manufacture and use. “The fundamental thing is to make the products greener. It’s more a state of mind to reduce the impact on the environment in the whole cycle—engines, construction, treatment of wastewater,” Racoupeau says. “We are always looking for new products that are easier to recycle.”

At the same time, he sounds a note of caution with regard to any expectations currently held out in the marketplace. “We have to take into account the technology. But the evolution is very slow. We did a big study last year. To be efficient, we need to sail at a certain speed, and that’s very difficult on classical sailing yachts with classical comfort. Or we need to make them very expensively out of carbon.”

With his origins in successful IRC and offshore racers, he is naturally also interested in innovations such as wings and foils. “At the moment we don’t have any solution to make wing sails very easy or cost-efficient. It’s a bit too early, too much on the experimental side.”

More promising at this stage is the idea of reducing a yacht’s power consumption and generating electricity under sail via a propeller already being dragged through the water. Catamarans are particularly well suited to such hydro generation because of their higher speeds, and because having a propeller in each hull doubles the potential output. Racoupeau has produced a 102ft concept cat called the Code E, which does just this and also includes two retractable wind turbines and a battery of solar panels.

“The energy consumption of the Code E has been designed to be minimal and optimized,” Racoupeau says. “The hull was designed to limit its wet surface, optimizing gliding and reducing drag, whether the boat is under sail or motor.”

According to Racoupeau, the boat was initially sketched back in 2008, generating lots of interest but no orders. “The market for such a large catamaran was not there,” he says a little wistfully. “I think maybe we were a little too far ahead at the time, but then again, that’s what these concept boats are all about.

Amazon FBA: Complete Step-by-Step Tutorial For Beginners 2023
Rafted Up in the Grenadines! – S4:E33
BOAT LIFE: Told to Leave the Island
Cape2Rio Draws to a Close
Racing Recap: Leg One of The Ocean Race