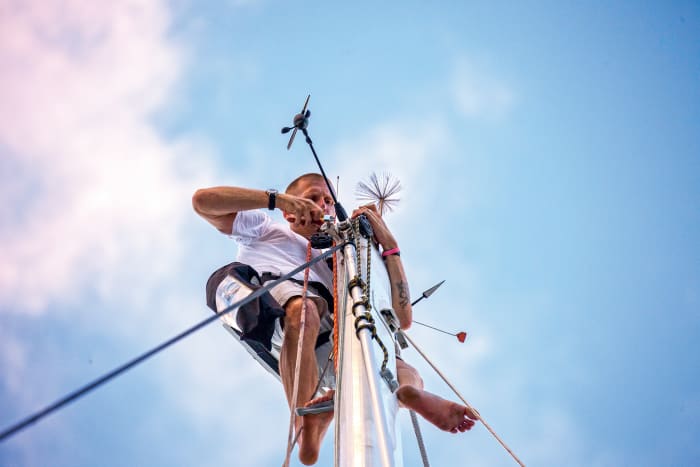 Our Nautor’s Swan 59, Icebear, was as close to Bermuda as we were going to get on our passage south to the BVI from the Chesapeake. When we left the bay, I’d had no intention of stopping until we made landfall in Tortola. Then the bilge started filling with water…

I’ve long evangelized that a big part of the art of bluewater sailing is learning to live without. There’s no better way to ruin a peaceful passage than spending hours or even days with your head in some manual trying to figure out how to get the electronic windspeed indicator working again. Truth is, you don’t need it. Get back to basics. Watch your telltales. Read the breeze on the water.

In 2011 Matt Rutherford sailed around North and South America in a dumpster-dived, donated 27ft Albin Vega, alone and without stopping. When he returned to the Chesapeake almost nothing on the boat worked anymore. The engine had quit while he was in the Southern Hemisphere. He’d had no electronics to begin with. He produced his drinking water using a simple, hand-operated watermaker, the kind normally only meant to be used for a few days in the liferaft.

Among the things that did work was his Monitor windvane self-steering system—something he truly couldn’t have done without. Matt’s sails were also in such good condition that aboard the media boat during his return in Annapolis, I overheard people asking if he’d had them replaced. (He hadn’t; he’d just taken extremely good care of them). The point is, there were countless times Matt could have thrown in the towel as things on board gradually failed, but he didn’t. Instead, he kept going, nonstop for 309 days, as his mission-critical gear continued doing its job, exactly as it should.

Granted, Matt’s is an extreme example. However, figuring out those things you can and cannot do without remains a key part of offshore passage prep. Make two lists—mission-critical items and luxuries. If you are honest with yourself, I suspect you’ll find most of the equipment you have on board falls into the latter category. Once you’ve made your lists, put 90 percent of your effort into taking care of those things you truly need. This is not always easy. Luxuries are typically more fun to work on than, say, your chainplates.

Of course, as was the case when we started taking on water aboard Icebear, things are not always quite so simple. In this instance, we traced the leak to a single bolt below the waterline, one of 11 securing the lower rudder bearing. My heart sunk when I discovered it. Should we stop in Bermuda? If so, what then? Could we even get hauled out there with our 12ft draft? In the end, we decided—after much deliberation and an e-mail to the boat’s designer—to continue on. The leak may have been annoying, but it would most likely not result in any kind of catastrophic failure.

Five days later we made landfall in the BVI. Once there, I borrowed some scuba gear, tightened the bolt and made arrangements for a haulout in Antigua. On the hard, we fixed the problem once and for all without ever having to interrupt our sailing schedule. Mission accomplished!

Andy Schell is a veteran delivery captain and co-owner, with his wife, Mia Karlsson, of the adventure-charter company 59 North, which specializes in providing sail-training and offshore passagemaking opportunities. Visit 59-north.com for more information