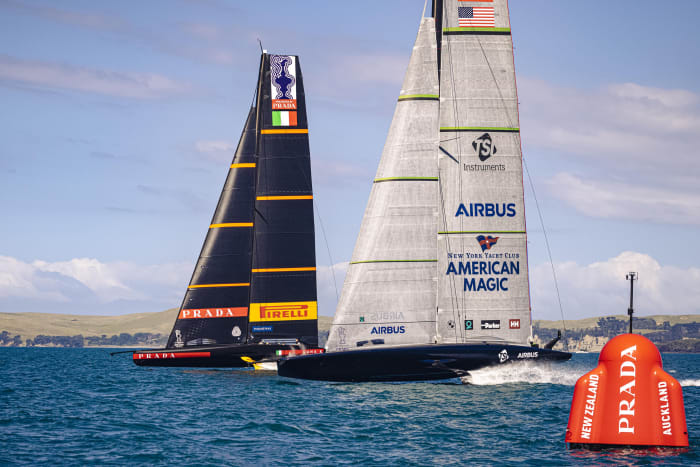 At 9 pm ET tonight, the brand new AC75’s will go head-to-head for the first time in the pre-America’s Cup Prada America’s Cup World Series Auckland. U.S. viewers will be able to watch live on NBC Sports Gold or as a replay online. The event will run from December 16-18, U.S. time.

In the World Series, all four teams—American Magic, Luna Rossa Prada Pirelli, Emirates Team New Zealand and INEOS Team UK—will compete in a double round-robin, in which each team will race each other twice. The Christmas Race (Dec. 19, U.S. time) will be an elimination series.

Covid forced the cancellation of the other events in the Prada America’s Cup World Series, meaning that this week’s racing and the Christmas Race will be the only opportunities for the America’s Cup teams to face off before the elimination round that will choose who faces Emirates Team New Zealand in the Cup itself. “In terms of not having the opportunity to race in [the other venues], from the systems that go inside the boat, to the media, to the race committee, we all are probably a bit on the back foot,” said Terry Hutchinson, Skipper and Executive Director of American Magic. But the unknowns will undoubtedly make for exciting racing and a dramatic shakedown of the four different AC75 designs.