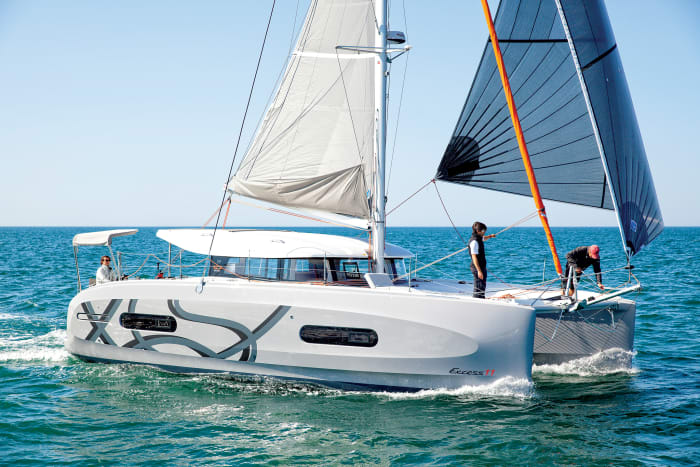 Granted, to call the new Excess 11 catamaran “small” is nuts. At 37ft long and nearly 22ft wide, she’s anything but petite. Nonetheless, as the entry point into Beneteau’s new Excess (or XCS) line, which also includes the Excess 12 and 15, she’s the baby of a bunch. More to the point, this baby exceeded all expectations on a recent test sail on the Chesapeake Bay.

VPLP is the naval architect behind the Excess line. Patrick Le Quement has also contributed exterior flair while Nauta Design has focused on the interiors. The hull for the XCS 11 is all-new, as opposed be being comprised of repurposed Lagoon sections, as was the case with the 12 and 15, with twin chines leading aft, creating more interior volume and a slightly different exterior aesthetic. The XCS 11 also has a lower and sleeker profile than the other two, giving her a look that is both speedy and aggressive.

Construction is done in three sections, all vacuum-infused, with balsa coring in the deck and the hull above the waterline. Another notable difference between the 11 and the 12 and 15 is a hard Bimini edge that hasn’t been rounded off, in the interest of saving weight. It looks different from what we’re used to, but it suits her.

All models in the Excess line have twin helm stations aft and no flybridge. A double seat for the driver and a companion unfolds behind each wheel. These seats work well. However, they could use some tweaking. They are narrow, for example, and the backrest runs straight up and down. There’s also no footrest, so you risk a sore back if you sit there too long.

There’s an option for engine controls at both helm pods, which is always nice to see on a cat. The controls are outboard and at hip level, right where they should be, so you can work them without having to bend over when docking.

Another point that deserves a nod is visibility. Typically, outboard helms mean you can see the transoms and the bow directly in front of you, but the other bow is obscured. A terrific surprise aboard the Excess 11 is the fact you can actually see through the saloon window to the opposite corner. The saloon windows are even clear rather than tinted, making it that much easier seeing where you’re going. Everyone aboard during my test sail remarked on how well thought-through this feature is.

Our test boat had the optional soft accordion sunroof, which opens and closes manually. It it’s a nice option that allows you to open things up in nice weather. Be warned, though, that it can also make it difficult to tuck the reefing lines into the bag once you’ve dropped the mainsail, since you can’t step on it. An important change that needs to be made topside is extending the non-skid finish on the hardtop out toward the edges, since these edges can get quite slippery when wet. Single long handrails to either side of the cabintrunk, as opposed to the two small rails currently there, would also be nice to have.

Forward pulpit seats are optional, and the bow roller launches the anchor from the front crossbeam. This puts the weight of the anchor well up toward the bows, which isn’t ideal. However, it also means the chain won’t cut into the hulls when the cat swings at anchor. Midway through our test sail, someone pointed out the fact we had six people in the cockpit, and there was plenty of room for all.

The Excess 11 is available with three or four cabins. Both versions have two heads—one in the master suite in the port hull (if that configuration is selected) and a second shared by the two guest cabins to starboard. This second large head and shower replaces what could have been two minuscule wet heads. In a 37ft boat, this is a completely reasonable tradeoff.

The master cabin is large and private, and the bed has cutaway corners, so sheets can go on more easily and occupants can get in and out without having to resort to all kinds of acrobatics. The saloon and galley are compact, but want for nothing, with plenty of refrigeration, and countertop and seating space. Storage space is adequate. The interior is light on drawer pulls and other cabinetry hardware, but it works. The effect is a smoother look that integrates well with the boat’s overall aesthetic.

Given how many times I’ve been skunked on test day, I was excited to get the boat out in a delightful 15-20 knots of true wind, flat water and perfect sunshine. At a 70-degree apparent wind angle in 15 knots of breeze, we sailed at 8 knots. Tacks were sharp, as we carried our speed through them quite well. Thumbing our nose at the wind, we unfurled the Code 0 and picked up another knot. The rooster tails that rose up behind us were impressive to see—an exciting ride in the best sense of the word.

Better still, while the 57ft Z-Spar rig and laminate Incidence sails on our test boat delivered all the performance we could have asked for, there’s also the option to turbocharge your XCS 11 with a “PulseLine” package, which adds 3ft more to the mast and another 59ft2 of sail. Thanks to the Excess 11’s self-tacking jib, it remained easy to handle throughout, well within the ability of any cruising couple.

The beam is just over 21ft, so the 29hp Yanmar diesels are set wide apart, making the XCS 11 supremely maneuverable. At wide-open throttle and 3,100 rpm, we motored at 6.8 knots. A more economical cruising speed of 2,500 rpm gave us 5.9 knots. These speeds were recorded on flat water, so results in heavy head seas may vary.

The XCS 11 is a confidence-building design due to her two helms being so far aft and close to the waterline. There’s nothing intimidating about driving her. She’ll even walk directly sideways when necessary.

Groupe Beneteau, the parent company of Lagoon, which builds the Excess line, is currently ramping up production. If you order an XCS 11 today, you may be able to sail her next April—just in time for a summer shakedown cruise.

As was noted by a member of the crew on our test sail, “people bring their lifestyle with them” when they go sailing. In that spirit, the Excess line has been designed to provide a whole new kind of sailing that more intimately connects you with the experience of life offshore. Because the XCS 11 is the first of the line to be created from scratch, she also best captures this sentiment. Truth be told, I was a bit of a skeptic at first, but I must admit I have since been both surprised and delighted by this new line of cats.